We Must Come Home from Korea

We Must Come Home from Korea 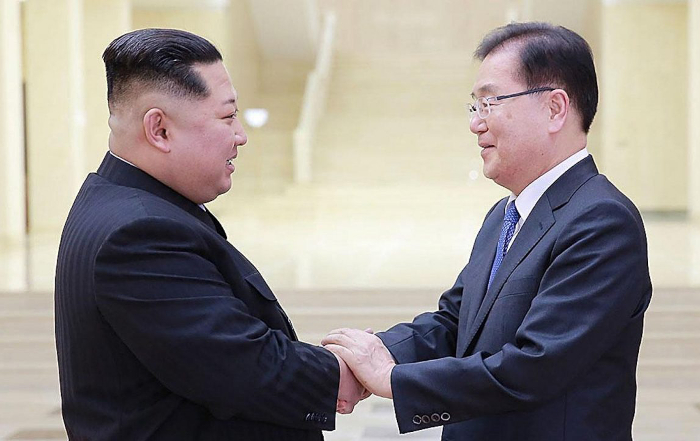 America’s military footprint abroad is unmatched in human history. With more than eight hundred military bases in over seventy countries across the globe, the US is in an ideal position to carry out all sorts of imperial adventures, though the emerging multipolarity on the world stage with the rise of Russia and China has thrown several wrenches into many of the regime change orchestrators’ wildest fantasies.

America’s overstretched presence abroad began to receive significant pushback after bungled nation-building experiments in Afghanistan and Iraq. Donald Trump’s election in 2016 initially created fears of a potential US retrenchment in global affairs. Many members of the foreign policy “Blob” genuinely feared large-scale troop withdrawals and disbandment of alliances like the North Atlantic Treaty Organization (NATO). Trump’s previous statements during his presidential run did hint at a desire to significantly scale back the post–World War II liberal internationalist order, which had many in the Blob up at night.

Most of these fears turned out to be exaggerated once Trump left office. Although the regime change fanatics on the Potomac did not get any additional military excursions, they could rest easy knowing the overall foreign policy structure remained intact with regard to large military spending, US participation in NATO, and military bases abroad still running without any issue.

Although none of Trump’s potentially disruptive foreign policy moves came to pass, he was able to float the idea of having countries like South Korea pay more for the US to host troops on their soil. In its previous cost-sharing agreement with the US, South Korea paid $900 million for stationing roughly 28,500 US forces. South Korea has been a US client state since 1948, after the Korean peninsula was divided at the thirty-eighth parallel in the immediate aftermath of World War II. In the ensuing period, the East Asian country has relied on the US for military aid.

One of the least talked-about aspects of South Korea’s military relationship with the US is that Korea had traditionally been barred from acquiring the most up-to-date weapon technology. For their part, South Korean leaders have historically made attempts to build an autonomous defense structure knowing full well that Americans would not have troops in their country forever and that North Korea could still pose a threat to its security.

Of course, South Korea’s reforms were gradualist in nature given its humble starting point after the Korean War, when it stood among the poorest nations in the world, trailing even a good portion of African nations in the 1950s. South Korea would later regain its footing by embracing market reforms and progressively integrating itself with the rest of the world, unlike its northern neighbor. As it grew prosperous, South Korea gained the ability to use its wealth to begin building a respectable national defense apparatus.

Current president Moon Jae-In has not deviated from the national security policy of self-reliance. According to Korean affairs expert Peter Banseok Kwon, South Korea has been dialing up its defense spending under the leadership of Moon. While South Korea has ostensibly made easing tensions with North Korea a major policy priority. South Korea still plans on spending more than 80 percent of its $91.9 billion defense budget over the next five years on weapons made locally instead of relying on imports.

These new spending increases are very much in line with the self-reliant national defense consensus that has consolidated in South Korea. Trump’s previous comments about tweaking the US’s defense relationship with the East Asian nation have further validated the South Korean government’s pursuit for defense autonomy.

South Korea is no economic slouch, which augurs well for its emergence as a regional power. It’s a highly developed nation, with a per capita GDP approaching $32,000 and a total GDP north of $1.6 trillion, landing it in the top fifteen largest economies in the world. Policymakers would not be wise to view South Korea as a nation in an infantile state. In 2019, it rolled out the world’s first commercial 5G network service, it has established itself as a world leader in the electronics sector, and has entered the mix as a big player in the automotive industry.

Although it’s nowhere near the US’s renowned defense industry, South Korea has gradually come into its own as an arms exporter. According to the Defense Agency for Technology’s Global Defense Market Yearbook, it was ranked tenth among the largest arms-exporting nations in the world from 2015 to 2019, when it accounted for 2.1 percent of the globe’s defense exports.

South Korea’s economic prowess suggests it can use those resources to build a respectable defense infrastructure in a manner many great powers in the West and its Japanese neighbor (pre–World War II) had done so in the past. It stands to reason that with Korea’s multiple decades of robust economic growth it now possesses resources that can be allocated toward building a proper national defense. Said resources constitute what international relations theorist John Mearsheimer describes as “mobilizable wealth,” the resources a state can tap to build and maintain military forces.

Although none of Trump’s potentially disruptive foreign policy moves came to pass, the idea of having South Korea pay more for hosting troops on its soil is now part of the political discourse. The fact that a number of foreign policy wonks were sweating bullets about a possible withdrawal from the Korean Peninsula does indicate that a paradigm shift is brewing. Due to the suffocating dominance of neoconservative and liberal interventionism in foreign policy milieus, most change will have to come about in a gradual process that will perhaps appear messy at first.

Contrary to what the so-called experts would like us to believe, there are no free lunches when it comes to defense. For decades, foreign policy commentators have spouted off vacuous bromides about values, human rights, and friendships, completely ignoring how converging national interests are what bring nations together in international politics. Paraphrasing the British prime minister Lord Palmerston, countries have no permanent allies, only permanent interests. Sacred values hardly figure in these kinds of arrangements.

All told, South Korea is a First World nation with a robust economy. Given South Korea’s rapid ascendance into the First World, it’s not a stretch to suggest that it can start to assume more of its defense functions. With the US currently engulfed in so much social tension while concurrently experiencing the classic imperial overstretch that has repeatedly befallen overzealous empires throughout history, a good way to start scaling back its imperial footprint and focusing more on its domestic affairs is by implementing a gradual withdrawal from regions such as the Korean Peninsula.

Pace the fearmongers, such a withdrawal would not be so chaotic. A number of international relations experts argue that an end to the US–South Korea military alliance would place South Korea under a Sino-centric order in East Asia. Artyom Lukin, an associate professor at the Far Eastern Federal University Department of International Relations, argues that a rising China would become a de facto “protector” of the Korean Peninsula in a post–American occupation scenario. In this new role, China would work tirelessly to prevent North Korea from attacking its southern neighbor as a way of maintaining order in its tianxia, or sphere of influence.

South Korea should be allowed to decide its own political destiny. A country with its kind of wealth is more than capable of getting its defense house in order. Its self-reliant national defense initiatives demonstrate that it’s serious about building an autonomous national security infrastructure without the US constantly holding its hand. From there, the US can initiate a prudent retrenchment in global affairs that is in line with the restrained foreign policy outlook of the founding generation.

All things considered, pulling troops out of South Korea is the best way to change the conversation on American foreign policy, which is completely swamped in platitudes of promoting missionary enterprises abroad and finding new bogeymen to confront. With all this talk about an “America First” realignment taking place within the American right wing, any political leader who can call for a coherent reassessment of American foreign policy priorities can galvanize an interventionism-skeptical electorate and dramatically shake up foreign policy for years to come.