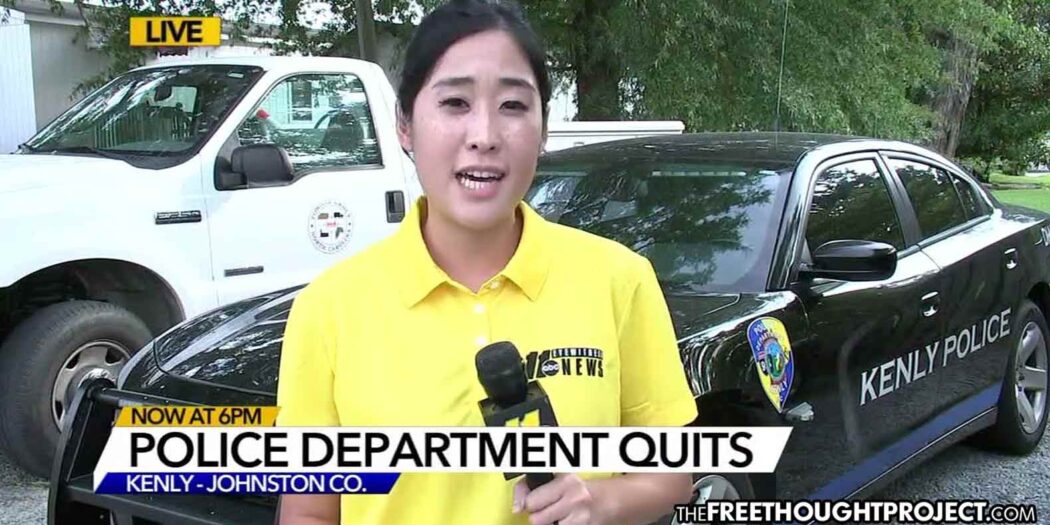 This month, without warning, the taxpayers of Kenly, N.C. found out that the police department they have been paying for “protection,” no longer wished to serve them. The entire department, including the police chief and every single officer on the force, turned in their resignation letters and abandoned their positions.

The move caught the entire town, including the mayor and the town attorney off guard as there was no warning given or demands made prior to the mass exodus.

WNCN reported that Kenly police chief Josh Gibson told the news outlet that he and his officers are quitting because of the environment created by new town manager Justine Jones, who started in June. According to WNCN, Gibson would not go into details about the environment and he declined an interview citing legal concerns.

Jones also refused an interview with local media and referred the outlet to Chip Hewett, who is the town attorney. Hewett told WNCN he’s never, in his 25 year career, seen a situation in which the entire police department abandoned their posts.

“I’ve seen resignations from politicians and the mayors and the councilmembers. I have seen employees resign. I’ve never seen a resignation where it’s an entire department,” Hewett said.

For now, the Johnston County Sheriff’s Office stepped in and said they will respond to calls but local business owners have concerns about the department being able to keep up with the calls.

“Everybody is short staffed for whatever reason and calls probably won’t be answered as fast as if you have someone who is in town,” said Crystel McGowan, who lives in Kenly and owns Iron Works Gym in Kenly.

“If the town council doesn’t respond like they should, I think you’re going to create an even worse pattern for the business owners,” said Sandra Parnell, a local business owner.

As we’ve reported in the past, entire departments quitting over disagreements or corruption happens fairly often. Last year, we reported on an analysis from Police Executive Research Forum (PERF), who found police departments from coast to coast are having an extremely difficult time keeping officers on the force. The staggering numbers have many alarmed, but is it really cause for concern?

Perf reports that the rate of retirements at some departments rose 45% compared with the previous year. According to the group’s research, at the same time, hiring slowed by 5%. Using the rise in violent crime across the country and these startling rates as the impetus behind a new spending plan, president Joe Biden recently approved the use of $350 billion in COVID-19 relief funding to hire more law-enforcement personnel and billions more for “community policing.”

While the town struggles to fill positions of their police force, it is important to point out that people aren’t going around breaking the law without cops to stop them—thus highlighting the revenue collection mission of police.

Drug offenses, parking violations, and traffic citations are not so much crimes, as they are streams of revenue for the city. They are also the reason for the majority of police harassment within particular communities; harassment that is being proven entirely unnecessary as the town continues to function just fine without cops.

What’s more, the idea that police protect you is a misconception, as they will seldom prevent violence. They normally show up after the violence or crime has been committed and then try and find a culprit, or not.

The average response time to a 9-1-1 call is 10 minutes nationwide; for poor areas, that time quadruples. In some cases, the dispatchers do not even take the caller seriously and the victim ends up dead when a crime could have actually been prevented.

The reality is that police act as revenue collectors for the state and solely exist to enforce the law only.

In a perfect world, police would show up prior to a crime and stop it, or at least during a crime, but this is simply not a reality.

Police in America also do not “protect and serve.” If you doubt this claim simply refer to Warren v. District of Columbia, in which the Supreme Court ruled that the police do not have a constitutional duty to protect a person from harm. We saw an example of this tragically unfold in Uvalde, Texas as cops cowardly waited in the hallway as a mass murderer slaughtered children in a classroom.

Imagine a police force that acted more like firefighters or EMTs. Firefighters don’t have to go door to door looking for fires, in order to be effective. EMTs, just like firefighters wait for a call before reacting and their services are oft proven invaluable contrary to that of police work. Perhaps this recent mass resignation can be used to channel this notion to the forefront and completely revamp the idea of policing in the land of the free. Perhaps.