Or maybe not says Nia Harris and Cassandra Simpson at Lobelog.

So where is all that additional taxpayer money actually going, if not job creation? At least part of the answer is contractor profits and soaring CEO salaries. In those six years, Lockheed’s stock price rose from $82 at the beginning of 2012 to $305 at the end of 2018, a nearly four-fold increase. In 2018, the company also reported a 9% ($590 million) rise in its profits, the best in the industry. And in those same years, the salary of its CEO increased by $1.4 million, again according to its SEC filings.

It may cost a lot to ‘defend” America but at least we can brag that we have the best weapons ever, like the F-35: 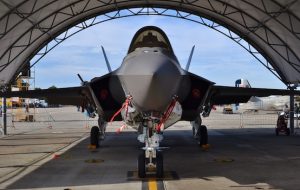 The F-35, by the way, is already the most expensive weapons system in history. As of March, its acquisition price tag was $400 billion. However, the cost of operating and maintaining the fleet over the next several decades stands at an estimated $1.45 trillion.

Careful readers will be surprised to learn that the operational test fleet is actually performing worse than the F-35s in the active Air Force, Marine Corps, and Navy squadrons. The test fleet is made up of 23 F-35s equipped with specialized instruments to record flight and combat data for later analysis to determine the program’s overall effectiveness. According to the latest available figures, the F-35s in the active forces managed a fully mission capable rate of only 27 percent. Nothing to crow about either.

But, no problem.  Defense (haha) industry stocks are doing great.

Nevertheless, neither the slaughter of passengers nor the subsequent deluge of shocking revelations have had any long-term impact on the stock price.