On Friday, conservative radio host Laura Ingraham noted on Twitter that the “press continues to ignore possibility of war during a Hillary presidency.” Underscoring the fact that many liberals both inside and outside the media are disregarding that fact that Clinton’s desired creation of no-fly and safe zones in Syria would be an act of war that would require a major escalation of U.S. troop deployments and risk an armed conflict with nuclear superpower Russia, Ingraham included this meme: 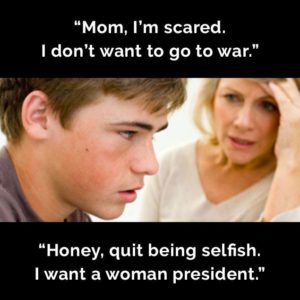 The older conservatism: We'll proudly fight for our country if need be.
The alt-right: We're scaredy-cats and proud of it. https://t.co/Qo58mfW91n

Since I’m not sure there’s a workable definition of alt-right, I’ll skip the question of whether Ingraham qualifies; wariness of unjustified and counterproductive deployment of military service members, however, should be a value common to serious thinkers across the spectrum.

Kristol’s declaration that he’ll proudly fight for his country is the real gem here, given the fact that he’s never served in the military, much less gone to war himself. Happily, many on Twitter were quick to call him on the deep hypocrisy of his boast and the middle-school lunchroom bravado embedded in his suggestion that those who are reluctant to send other human beings to lose their lives, limbs and minds in the Middle East are “scaredy-cats.”

Scaredy cats? What are you, twelve?

What happened to avoiding war that wasn't tied absolutely to our national interests? @BillKristol @brianjsymes