I wanted to write down and submit to the Libertarian Institute what I saw today at the protest in downtown Pittsburgh over the George Floyd killing. Some background on me: I am a Libertarian—a minarchist, not an anarchist. I was brought into the movement by the Ron Paul campaigns, and by reading Albert J. Nock, Rothbard, etc. I am a teacher by profession. I went to the protest because the killings of Floyd, Breonna Taylor, and Duncan Lemp are outrageous and wrong. 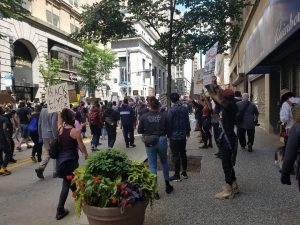 The protest started off in downtown Pittsburgh, at Sixth and Liberty. When I got there, the march was just getting started, and the numbers were really substantial: in the thousands, for sure. The crowd was about what you would expect. A goodly number of African Americans of all ages, but skewing younger. Also present were a good number of white people, maybe half the crowd—also mostly millennials and younger. There were commies present, of course—scores, anyway, of crust punk, Antifa types. There was at least one red flag, and a guy handing out flyers on the necessity of socialist revolution. But needless to say, anarcho-communists were nowhere near the majority of marchers. There was an African American doing open-carry of an AR-15.

The march wound its way through downtown, and although when I walked back through the route afterwards I saw evidence of tagging, I saw absolutely no property crime of any kind. I saw no violence, no scuffles, no confrontations, no theft, no looting, nothing of the sort. The march was entirely peaceful. We passed dozens of stores, hotels, and so forth. Nothing was touched.

I also saw no police, not one cop, until almost the end of the march. The march made its way to Washington Place, past the PPG Arena where the Pittsburgh Penguins play hockey. It halted around the intersection of Washington Place and Centre Avenue, near the beautiful Epiphany Roman Catholic Church. 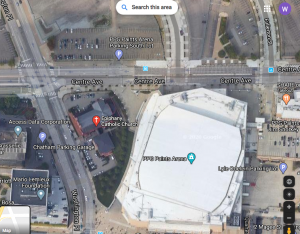 I walked up Washington Place to look at the carvings on the Church. I could see down into the depression. The crowd seemed to be moving North, so I did too. As I took a right from Washington Place onto Centre Avenue, I noticed—of all things—a parked police car. This was really odd. It was not blocking the street so demonstrators could march. The lights were not on.  There was no cop with the car. Just the police car, parked there, by itself. I thought to myself at the time, “Man, I wouldn’t leave this police cruiser here, not with this march going on.” I figured it might get tagged. I kept walking East up Center Avenue.

There is an elevated place behind PPG arena on Centre Avenue where I went and stood behind a railing to watch. At this point, there was no violence. Police were visible on horseback, but they had withdrawn East up Centre Avenue as the protest emerged out of Washington Place and onto Centre Ave. People were milling around chanting. I noticed that one dude was eating a peanut butter and jelly sandwich out of a Ziploc bag, which was sort of charming. Then things got nuts.

As I am reconstructing this in my mind, knowing the fragility of eyewitness testimony, I am being as accurate as I can. I am being careful because what I saw next, I am convinced, was the police deliberately provoking the crowd. It was astonishing.  Again, nothing destructive had happened yet. At this point, four police officers on horseback rode briskly through the crowd, moving downhill, East to West, on the sidewalk on the South side of Centre Avenue. The police on horseback were yelling instructions, but all four of them were yelling at once, and yelling different things. If they were ordering people to disperse, it was unclear. I could not understand a word of what they were saying—and they rode right past me, very close, as I watched on that slight rise behind the PPG arena behind a railing. No one was doing anything wrong, so it seemed needlessly confrontational.

This provoked a negative response further down to the West on Centre Avenue, and I heard, but could not see, clashes with the horseback police as they seemed to move first west then northwest. I cannot tell you what the protesters did, because I heard trouble, yelling and such, but my view was blocked.

Then, I saw the damndest thing I think I have ever seen. A police cruiser, lights on, sirens screaming, horn blasting, drove west down Centre Avenue toward the backs of protesters who were themselves facing westward further down Centre. A twenty-something black male ran in front of the police car, giving the black power salute, and the police cruiser jammed on the brakes and stopped. This caused twenty or so protestors to run toward the car and begin beating the sides of it. Another protester (stupidly, in my view) stood behind the police cruiser, preventing him from backing up.  The police cruiser then slammed over the divider between lanes, and retreated at high speed. At that point, a hundred or so protestors who had run up when they heard the screeching brakes began chasing the police car. It stopped, then retreated again.

I asked the African American lady next to me what was happening—I figured I had to have missed something, some violence maybe, or some order to disperse that I had not heard. She responded, with an exasperated sigh, something to the effect of: “See how they do? It’s on now.”

And she was right. I figured this was going in a bad direction, and it was not like anyone was giving speeches or anything, so I decided to head back toward downtown. I went down Center Ave on the North side of the street watching the demonstrators. I stopped and got water out of my backpack, and looked to see where the horse cops went (I didn’t see them). After waiting a few minutes, I noticed the crowd surge toward that parked, solitary police car I had noticed when I walked past earlier. I saw that it had been tagged all over with paint. Then I realized a window had been broken and smoke was just beginning to come out. Somebody had just set the police car on fire. 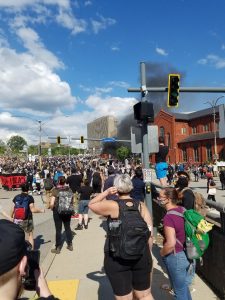 Crowds behave stupidly.  As I was walking away an African American demonstrator with dreadlocks was yelling and pushing people away from the car: “Y’all know that’s gonna explode—get back, get back.”  Thanks to his quick thinking and willingness to assert himself, the crowd wandered a safe distance away. By the time I got to the bridge on Centre after the intersection with Washington going West, small explosions started from the car. A police officer was standing at the intersection where the bridge starts—no riot gear, short sleeves—and no one was bothering him. I short time later, I noticed the riot cops were also on the scene, charging northward, uphill on Washington Place. I went back to my car and drove home.

The explanation that the Pittsburgh PD has given on the evening news here is that a bad element hijacked a peaceful protest.  That is partly true. The very large protest was peaceful as it wound through downtown. I will concede that from the beginning it was clear that Antifa/crustpunk types were there, ready to fight—bike helmets, goggles, designated first aid folk, etc. But they were nowhere near the majority, and until the cops first rode through—then damn near drove through—the crowd, even the Antifa types were behaving. No one was being violent or destructive. After those two police-driven incidents, as the young lady at the railing said to me, it was on.

I have radical politics, I guess, but I live a very conventional life.  I suppose I am a “right-libertarian.” Before today, if you had told me you went to a demonstration, and the police had provoked a riot, I would have had a very hard time crediting that. “What would their motivation be? Why?” I am still trying to figure that out now. I really have no idea. However, I would swear up and down, in a court of law if I had to, that the cops provoked the rioting in Pittsburgh today. They turned a peaceful, if angry, atmosphere into to the fearful, raging, confrontational crowd that Antifa could then steer into property crimes and violence. And they did it right in front of my eyes. None of that excuses Antifa. I don’t like commie violence against property any better than anyone else who follows the Libertarian Institute, and apparently after I left for my vehicle on the other side of downtown, they started breaking windows and attacking people’s private property.

But, as crazy as it sounds, the cops started it. I was there. I saw it.