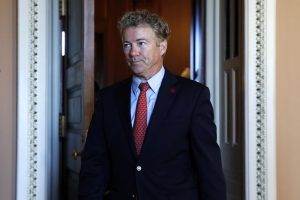 Senator Rand Paul stopped an attempt by Senate minority leader Chuck Schumer from bringing a resolution to advance the senate vote on the house resolution to reverse President Trumps withdrawal of U.S. troops in Syria.

The one senator to block it was Rand Paul.

“He should come to the floor and say that we are ready to declare war. We are ready to authorize force, and we are going to stick our troops in the middle of this messy, messy, five-sided civil war where we would be ostensibly opposed to the Turkish government that has made an incursion,” Paul argued.

More at The Hill

It would be all the other guys' fault, you understand: President Joe Biden said in an address to the Democratic Senatorial Campaign Committee on Thursday night that the country under his leadership is as close to "Armageddon" as it has been since the Cuban Missile...

END_OF_DOCUMENT_TOKEN_TO_BE_REPLACED

I Got to Meet Roger Waters!

He was very nice to me. It was really rad.