Moscow — Russia’s state-funded news network, RT, is apparently now sponsoring ads in a Moscow airport targeting Hillary Clinton and the Democratic Party. Images of the signs, posted on Reddit over the weekend, come as the mainstream media continues to push the notion that Russia intervened in the 2016 election on behalf of Donald Trump.

“Missed a plane? Lost an election? Blame it on us!” says one of the ads, alluding to the fact that in terms of seats in Washington, D.C., the Democrat Party was decimated in 2016.

“The longer you watch, the more upset Hillary Clinton becomes,” says another ad. And a third, which reads “Come closer and find out who we are planning to hack next,” clearly references the notion that Russia was behind the hacking of the Democratic National Convention networks. 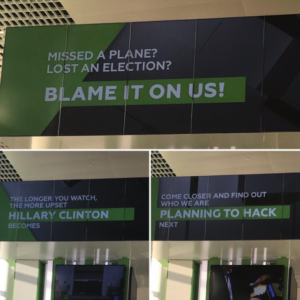 To date, no hard evidence has been put forth proving that Russia colluded with Donald Trump and his team, and both Trump and President Vladimir Putin have denied that any conspiracy exists.

The advertising, however, is very real, and it does appear to be funded by the Russian government. The Independent Journal Review reached out to RT for comment, and a spokesperson confirmed that the ads are “absolutely” genuine and sponsored by the network.

Recently, the “Russian collusion” theory spread to Donald Trump’s son, Donald Jr. The accusation suggests he met with a Russian lawyer in June of last year to try to obtain damaging information on Hillary Clinton. While the meeting did take place, the Trump administration contends it was standard political practice.