Study: Pentagon Wasted $28 Million on the Wrong Kind of Camouflage 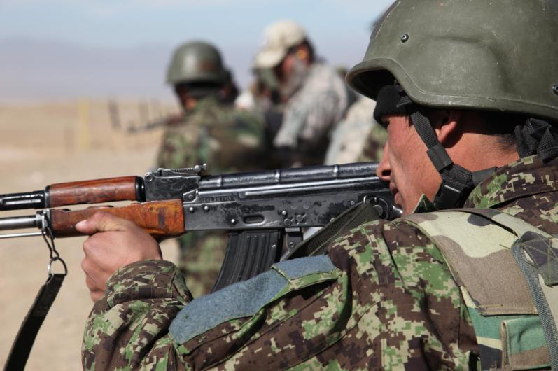 The Pentagon overspent between $26 and $28 million on useless camouflage for the Afghan National Army (ANA), a government watchdog study found.

Conducted by the Special Investigator General for Afghanistan Reconstruction (SIGAR), the study not only found that between November 2008 and January 2017 the Defense Department purchased uniforms for the ANA without ensuring the suitability of the camouflage pattern for Afghan environs, but also overpaid for a proprietary pattern over more cost-effective options.

According to the study, the pattern chosen for the ANA uniforms may actually put soldiers at greater risk, making them stick out like a sore, green thumb against a tan landscape. Though some lands in the northern provinces of Afghanistan are lush and fertile—forests cover only 2.1 percent of the country’s land area—most of the country is either arid or semi-arid desert, making the green “forest” pattern chosen for the uniforms potentially worse than useless.

The Defense Department chose a “camouflage pattern without determining the pattern’s effectiveness in Afghanistan compared to other available patterns,” the report said in its conclusion. “As a result, neither DOD nor the Afghan government knows whether the ANA uniform is appropriate to the Afghan environment, or whether it actually hinders their operations by providing a more clearly visible target to the enemy.”

The pattern procured was a proprietary design created and owned by HyperStealth Biotechnology Corporation, a Canadian firm established in 1999.

The Defense Department personnel responsible for assisting the Afghans with uniform specifications found the HyperStealth company “through internet searches,” and the then-Afghan Defense Minister Abdul Rahim Wardak “liked what he saw,” ultimately settling on the forest pattern.

John Sopko, the special inspector general for SIGAR, was indigent about the DoD’s practices. “My concern is what if the [Afghan] minister of defense liked purple, or liked pink?” Sopko told USA Today. “Are we going to buy pink uniforms for soldiers and not ask questions?”

The decision cost the department tens of millions in additional tax dollars.

“DOD’s lack of due diligence and its decision to purchase ANA uniforms using a proprietary camouflage pattern appear to have resulted in unit costs that are significantly higher than those for similar non-proprietary camouflaged uniforms, potentially costing the U.S. taxpayers an additional $26.65 million–$28.23 million since 2008,” the study found.

Failure to find a different, non-proprietary pattern for ANA uniforms could cost U.S. taxpayers between $68.61 million and $72.21 million over the next ten years.

The SIGAR study also discovered that the Defense Department may have violated the Federal Acquisition Regulation, a law barring sweetheart contracts to favored companies. “Agency requirements shall not be written so as to require a particular brand name, product, or a feature of a product, peculiar to one manufacturer, thereby precluding consideration of a product manufactured by another company,” unless somehow that brand serves a purpose other brands cannot, the regulation reads.

There was, in fact, resistance from some officials at the DoD to the decision to award the contract for some 1.3 million uniforms to a sole source, HyperStealth, but it apparently was not enough to prevent the deal from being inked.

“The DOD contracting office believed that, because there were so many available camouflage patterns in the world that a sole-source award would be hard to justify,” the SIGAR study said. “For example, aside from the many patterns available from commercial sources other than HyperStealth, the U.S. government already had rights to multiple uniform patterns that were not in use by U.S. forces that could have been used by the ANA and may have been equally effective in the Afghan environment.”

The study recommends a cost-benefit analysis of the pattern, which the DoD says it intends to do.

“DoD concurs in the suggestion contained in this report that a DoD organization with expertise in military uniforms should conduct a cost-benefit analysis […] to determine whether there is a more effective alternative, considering both operational environment and cost,” wrote Jedidiah Royal, the Acting Deputy Assistant Secretary of Defense for Afghanistan, Pakistan and Central Asia, in a letter responding to the study.

As of March 31, Congress has allocated $66 billion to supporting the fledgling Afghan National Defense and Security Forces, out of a total $117.3 billion spent on “reconstruction” activities in Afghanistan since 2002.

Previously, SIGAR has noted cases of extremely wasteful military spending, finding, for example, that the department had spent nearly a half-billion dollars on transport aircraft for the Afghans which were found “unfit for use and were scrapped for pennies on the pound.”

While a new troop deployment of several thousand American soldiers is expected to be announced in the coming weeks, the findings of the SIGAR study only highlight how much treasure has been squandered in the Afghan conflict, now the longest-running war in American history.

“This is just simply stupid on its face,” Sopko told USA Today. “We wasted $28 million of taxpayers’ money in the name of fashion, because the defense minister thought that that pattern was pretty. So if he thought pink or chartreuse was it, would we have done that?”

[The article was originally published at The Daily Sheeple.]