One of the main arguments you hear against a massive reduction in the State (or its complete abolition) is that there are just some services the private sector can’t provide. The sophist will jump right to “who will build the roads?” The individual who has thought more about it mentions police/fire rescue/military. Who can blame them? From a young age we are taught that the State must keep a monopoly over these things. “How would they get paid?” “If they were privatized wouldn’t there be widespread corruption?” (The latter is my personal favorite) 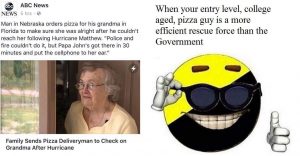 The included meme references how on October 9, 2016, a Nebraska man who couldn’t reach his grandmother in Florida used the private sector to make sure she was OK after a hurricane had hit a couple days previous. The power went out that Friday and her cell phone died so they couldn’t verify her safety.

Now please understand this. Had the man called police or any public service, they would not have gone to check on grandma. That is not their job. Warren vs. District of Columbia decided that the police have no duty to protect you. They are not here to keep individuals safe, they are here to enforce laws. Please research Warren vs. D.C.

Knowing that the government wouldn’t help, this man called a private company asking them to deliver a pizza so that the family would know that she was well. Upon arrival if the driver found that grandma was in distress, then he could call an ambulance (usually another private entity) and get her the help she needed. Incidents such as this should teach you two things:

1. The police are not there to serve you although you are paying their salary.

2. Even though Papa John’s is not a rescue service, they became one because it benefited them financially. (Maybe an idea for an after-disaster rescue service?)