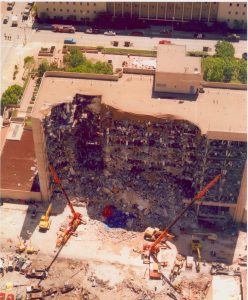 From the very beginning it was obvious that the federal government was lying about the extent of the plot behind the Oklahoma City bombing of April 19, 1995. As former federal prosecutor Larry Mackey admitted to journalist Andrew Gumbel, his team knew very well they were letting guilty men go free. (Andrew Gumbel and Roger Charles, Oklahoma City: What the Investigation Missed and Why It Still Matters, p. 328.)

Therefore, the Libertarian Institute is proud to feature the world’s greatest collection of pertinent documents and news reports about Timothy McVeigh’s other co-conspirators, compiled by the great independent researcher Richard Booth. Included are thousands of documents from the ATF, FBI and Secret Service, trial transcripts, more than 1,000 important new articles and much more.

There are no fake red herrings — such as author Jayna Davis and the neoconservatives’ ridiculous claims that Iraq and al Qaeda were behind the attack — to be found here.

The real story is that McVeigh was not a “militia” guy, but a full-fledged neo-Nazi, like his confederates.

The most likely reason the government let the guilty go free is because many of them were already flipped state’s witnesses and under-cover informants, which would have caused “embarrassment” on the part of those officials who supposedly had these men under control. Also, the government, including the ATF and FBI, had all the prior knowledge of the attack that they needed to prevent it, yet failed to do so. So they decided to cover up the truth instead.

168 innocent people were killed in the Oklahoma City bombing, along with more than 680 wounded, all of whom still deserve justice and the truth.

The purpose of this archive is to serve as a primary source collection for other journalists to use to help them to get to the real truth behind this atrocity.

Richard Booth and I would like to thank the Wilburn family, Wendy Painting, Mark Hamm, David Hoffman, Charles Key, Jesse Trentadue, and especially the great journalists J.D. Cash and Roger Charles for all their hard work in bringing this important information to light.

Significant contributions in reporting on this case have also been made by a few mainstream reporters, including Ambrose Evans-Pritchard, John Solomon, Kevin Flynn, James Ridgeway, Peter Carlson, and Ryan Ross. Our thanks go out to them as well.

Find the truth at libertarianinstitute.org/okc.

Enough Already: Time to End the War in Afghanistan

END_OF_DOCUMENT_TOKEN_TO_BE_REPLACED

Given the recent stories about Merrick Garland’s experience at the helm of the Oklahoma City bombing prosecution and his own comments about prosecuting white supremacists should he be made Attorney General, I have some questions about Garland’s handling of the OKC...