Professor Don Boudreaux of George Mason University says that Trump’s trade policies are unethical.  Boudreaux, who is one of my favorite free-market economists, should stick with economics instead of veering into ethics.

Boudreaux is correct that free trade is an overall positive for America, that trade restrictions and tariffs are an overall negative, that trade deficits can be both good and bad, that creative destruction is good when driven by comparative advantage and true competition, that mercantilism and other forms of political interference in markets is almost always bad, and that President Trump’s stated trade policies are a mishmash of contradictions that will harm working-class Americans.

Now for a big “However…”

However, Boudreaux is not necessarily correct about the ethics of trade.  In a recent letter, for example, he wrote that individuals have a right to buy goods and services from whomever they want, at whatever price they want.  Therefore, he went on to say, it is unethical for the government or Donald Trump to tell them what they can do with their money.  He uses an analogy of a neighbor pointing a gun to your head and telling you that you have to hire his son to cut your lawn instead of using a lawn service across town.  (The letter is reprinted at the end of this commentary.)

Of course a next-door neighbor isn’t a nation state, or a democratically-elected government, or the rule of law.  And economics is not a moral philosophy.  Economics is just one of the social sciences and no more important in understanding human interactions than sociology, psychology, anthropology, and political science.

For a different view of the ethics of trade, consider the cotton trade under slavery, keeping in mind that cotton was a global industry in the nineteenth century that rivaled the oil industry of today in economic importance.

The English bought American cotton produced by slaves, and in the process put tens of thousands of East Indians cotton workers out of work.  Later, New England cotton mills also bought slave cotton, enriching Brahmin families with fortunes that were subsequently passed onto succeeding generations, including some of the current generation of left-liberals who still live on the tainted wealth yet sanctimoniously preach about social justice and fairness.

Was it ethical to buy slave cotton?  Should the British government have stopped cotton merchants from buying it?

Or how about buying rubber from the Belgian Congo during the reign of King Leopold II of Belgium?  Was that ethical? Consider that Belgian colonists inflicted a genocide on natives in the Congo that was worse in sheer numbers than the Holocaust.

Or how about buying goods today from mercantilist China or oil from mercantilist Saudi Arabia?  Does it matter in terms of ethics that neither of these two states is a liberal democracy that protects civil liberties, but both are autocratic states that punish citizens who depart from the party line and social norms?

Or to go back to Boudreaux’s example, how about the ethics of using a lawn service that has a workforce of children kept in chains and flogged mercilessly?

Boudreaux might respond that these aren’t good examples, because his ethical principle is based on perfect competition and total individual freedom, and not on conditions of slavery and genocide—or any other coercion for that matter.  Of course perfect competition is a theoretical construct and not a reality, and individuals don’t live in Galt’s Gulch or some other anarchist fantasyland without any government.

The point is that the ethics of trade is not as black and white as the professor would have us believe.  That’s why volumes have been written on the subject and on moral philosophy in general.

The question of the ethics of trade is further complicated by two other realities.

The first reality is that much trade is conducted by corporations, not individuals.  Take the steel industry.  Individuals don’t buy slab or sheet steel coming out of steel mills; corporations do.

Economists correctly state that cheaper steel benefits the corporations that buy steel, such as automobile companies.  Likewise, cheaper steel also benefits consumers who buy final products containing steel, such as cars, which would be more expensive if steel were more expensive.  They also say that if other countries want to beggar their own citizens by underpricing steel and other products, that’s good for American consumers, who can import goods at lower prices and spend or invest the savings in more beneficial ways.   No doubt, the same argument was made by the English when they bought cheap cotton produced by American slaves.

This leads to the second reality:  that all trade is not mutually beneficial.  There are winners and losers from some trade, especially trade with mercantilist countries.  In the case of steel, for example, auto buyers have won and steel workers have lost.  Or stated differently, society as a whole has benefited while a segment of society has lost.

But there is a cost to society that is not part of the standard economic calculation.  Taking the steel example again, formerly thriving steel towns are in decay and have seen a plummeting of incomes and a corresponding skyrocketing increase in drug use, divorces, school dropouts, and welfare dependency—all of which are a cost to society at large.  It’s easy to be cavalier about this when one is securely ensconced in George Mason University, which is located near the Imperial City of Washington, D.C.  But it’s impossible for those experiencing the decline firsthand to be cavalier about it.

Which brings us to a final question:  If society has benefited from workers in the steel industry and other industries losing their jobs, doesn’t society have a moral obligation to help these same workers?

Contrary to what Boudreaux seems to think, this is not a question that can be answered by economics.

Addendum:  Letter from Boudreaux to a Reader

Thanks for your e-mail.

You say that while I might be correct that Donald Trump doesn’t understand the economics of trade, I am “out of bounds to write as though it is unethical for our new President to favor additional trade restrictions.”

You likely doubt me, so let me ask: If your next-door neighbor, Jones, pokes gun at your head to order you to pay to him a fine if you continue to have your lawn mowed by a company located across town rather than by his teenage son, would you not immediately understand such coercion to be unethical?  Of course you would.  Now I challenge you to explain to me how Donald Trump’s actions on the trade front differ in any essential ways from those of this hypothetical Jones.

I can think of no essential difference.  Sure, Trump was elected to a grandiose political office.  So what?  Suppose that a majority of your neighbors vote to empower Jones to threaten you with violence in order to discourage you from buying your lawn-care services from someone outside of your neighborhood: would you then think that Jones’s actions are ethical?  I wouldn’t.

I understand that government has long interfered, and in many different ways, in the peaceful affairs of private citizens, from telling blacks where they could and couldn’t sit on buses to confiscating large chunks of citizens’ incomes for transfer to corn farmers, airplane manufacturers, and other politically powerful groups.  I regard all such interference to be unethical.  But because Trump trumpets so loudly and so proudly his promise to interfere in Americans’ commerce with non-Americans – and for no reason other than to enrich some Americans at the expense of other Americans – I focus much of my attention on this particular instance of vile, inexcusable behavior. 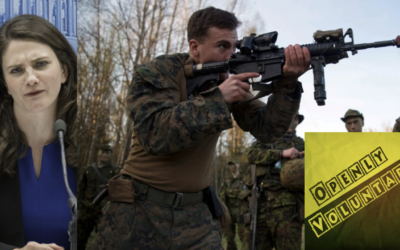