US Propaganda Poster Depicts the Taliban as “Muslim Dogs”

The Washington Post is reporting that US military has withdrawn a propaganda leaflet they printed and distributed and are apologizing for its contents:

A senior U.S. commander in Afghanistan apologized Wednesday for propaganda leaflets that superimposed a key Islamic text on the image of a dog.

The leaflets distributed by U.S. forces in Parwan province, north of Kabul, on Tuesday depicted a lion, representing the U.S.-led coalition, chasing a dog with a section of the Taliban’s banner, containing a passage from the Koran in Arabic, superimposed on its side.

WaPo then goes on to bleathe about how in Afghan culture dogs are considered unclean and combining them with Muslim imagery caused offense. But as Moon of Alabama points out that actually amounts to a complete whitewash of the actual level of incompetence involved.

Actually the “passage from the Koran” in question is actually the shahada, which, yes, is a popular motif of Taliban imagery, but also happens to be the central creed of Muslim faith: “There is no god but Allah and Muhammed is his prophet.”

The Pentagon idiocy wasn’t in marrying the shahada to a dog, but marrying it to its depiction of the Taliban, and contrasting both with the huge lion representing the US military.

When an Afghan villager is given a leaflet depicting a US beast chasing after a smaller animal with the shahada on its back, what else is he to think but that the Americans are proud enemies of Islam? And if the smaller animal is supposed to stand for the Taliban what other message this sends but that the Taliban are defenders of his faith?

How exactly does the Pentagon plan to “win Afghanistan” when it can’t even keep its psyops division from accidentally producing propaganda for the enemy? 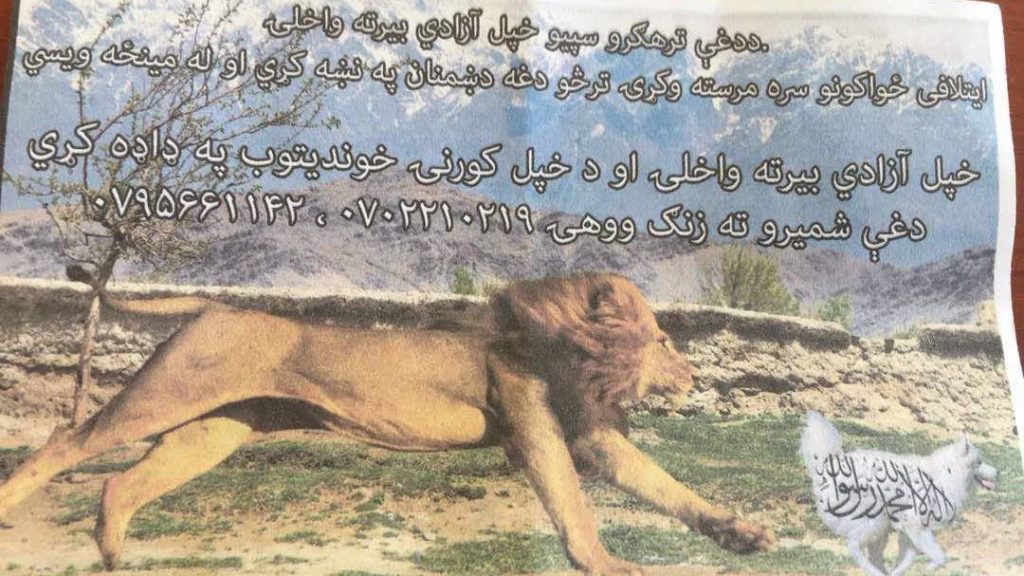 For the record the highly “cultured” motto on the leaflet read:

“Regain your freedom from these terrorist dogs and aid the coalition forces so that they annihilate these enemies.”