“Because the courts have ruled that government employees can never be held accountable for crimes you commit, so who cares?” was just implied, I guess. 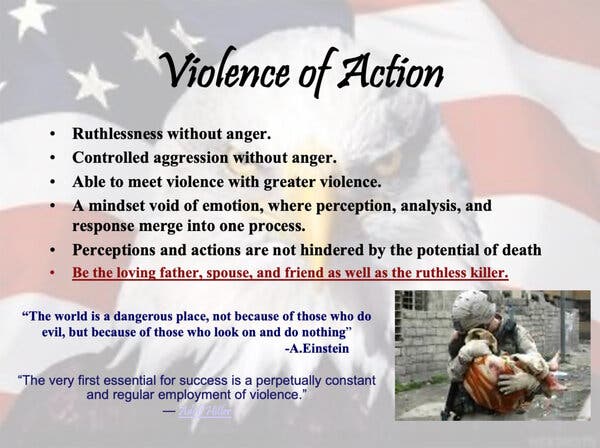 A slide show once shown to cadets training to join the Kentucky State Police includes quotations attributed to Adolf Hitler and Robert E. Lee, says troopers should be warriors who “always fight to the death” and encourages each trooper in training to be a “ruthless killer.”

The slide show, which came to light on Friday in a report from a high school newspaper, brought harsh condemnation from politicians, Jewish groups and Kentucky residents, but not from the Kentucky State Police department itself, which said only that the training materials were old. …

The quotations attributed to Hitler, the genocidal leader of Nazi Germany, and Lee, the Confederate general, are included among 33 slides that were shown to cadets in the Kentucky State Police Academy as part of a slide show entitled “The Warrior Mindset.”

“The very first essential for success is a perpetually constant and regular employment of violence,” reads one quotation attributed to Hitler, who is quoted more than anyone in the training document. Some of the statements attributed to Hitler link to a website providing biographical information about him and listing books by and about him.

The training itself emphasizes that troopers must be ready to employ violence in order to do their jobs properly. One of the slides that quotes Hitler — under the heading “Violence of Action” — also says troopers should “be the loving father, spouse, and friend as well as the ruthless killer.” Another says warriors “always fight to the death, they never quit” and that they must be willing to “commit to the fight.” …

The slide show was first reported by The Manual Redeye, a student newspaper at duPont Manual High School in Louisville, in an article written by the 16-year-old and 14-year-old sons of another lawyer involved in the lawsuit against the trooper.