The Boom Is Worse than the Bust

The Boom Is Worse than the Bust 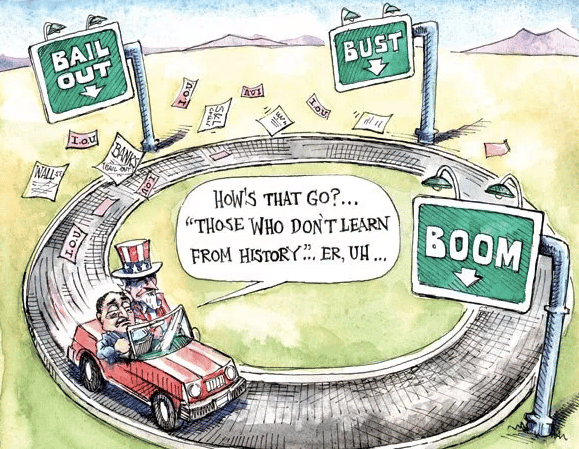 The popularity of inflation and credit expansion, the ultimate source of the repeated attempts to render people prosperous by credit expansion, and thus the cause of the cyclical fluctuations of business, manifests itself clearly in the customary terminology. The boom is called good business, prosperity, and upswing. Its unavoidable aftermath, the readjustment of conditions to the real data of the market, is called crisis, slump, bad business, depression. People rebel against the insight that the disturbing element is to be seen in the malinvestment and the overconsumption of the boom period and that such an artificially induced boom is doomed. They are looking for the philosophers’ stone to make it last.

It has been pointed out already in what respect we are free to call an improvement in the quality and an increase in the quantity of products economic progress. If we apply this yardstick to the various phases of the cyclical fluctuations of business, we must call the boom retrogression and the depression progress. The boom squanders through malinvestment scarce factors of production and reduces the stock available through overconsumption; its alleged blessings are paid for by impoverishment. The depression, on the other hand, is the way back to a state of affairs in which all factors of production are employed for the best possible satisfaction of the most urgent needs of the consumers.

Desperate attempts have been made to find in the boom some positive contribution to economic progress. Stress has been laid upon the role forced saving plays in fostering capital accumulation. The argument is vain. It has been shown already that it is very questionable whether forced saving can ever achieve more than to counterbalance a part of the capital consumption generated by the boom. If those praising the allegedly beneficial effects of forced saving were consistent, they would advocate a fiscal system subsidizing the rich out of taxes collected from people with modest incomes. The forced saving achieved by this method would provide a net increase in the amount of capital available without simultaneously bringing about capital consumption of a much greater size.

Advocates of credit expansion have furthermore emphasized that some of the malinvestments made in the boom later become profitable. These investments, they say, were made too early, i.e., at a date when the state of the supply of capital goods and the valuations of the consumers did not yet allow their construction. However, the havoc caused was not too bad, as these projects would have been executed anyway at a later date. It may be admitted that this description is adequate with regard to some instances of malinvestment induced by a boom. But nobody would dare to assert that the statement is correct with regard to all projects whose execution has been encouraged by the illusions created by the easy-money policy. However this may be, it cannot influence the consequences of the boom and cannot undo or deaden the ensuing depression. The effects of the malinvestment appear without regard to whether or not these malinvestments will appear as sound investments at a later time under changed conditions. When, in 1845, a railroad was constructed in England that would not have been constructed in the absence of credit expansion, conditions in the following years were not affected by the prospect that in 1870 or 1880 the capital goods required for its construction would be available. The gain that later resulted from the fact that the railroad concerned did not have to be built by a fresh expenditure of capital and labor, was in 1847 no compensation for the losses incurred by its premature construction.

The boom produces impoverishment. But still more disastrous are its moral ravages. It makes people despondent and dispirited. The more optimistic they were under the illusory prosperity of the boom, the greater is their despair and their feeling of frustration. The individual is always ready to ascribe his good luck to his own efficiency and to take it as a well-deserved reward for his talent, application, and probity. But reverses of fortune he always charges to other people, and most of all to the absurdity of social and political institutions. He does not blame the authorities for having fostered the boom. He reviles them for the necessary collapse. In the opinion of the public, more inflation and more credit expansion are the only remedy against the evils that inflation and credit expansion have brought about.

Here, they say, are plants and farms whose capacity to produce is either not used at all or not to their full extent. Here are piles of unsalable commodities and hosts of unemployed workers. But here are also masses of people who would be lucky if they only could satisfy their wants more amply. All that is lacking is credit. Additional credit would enable the entrepreneurs to resume or to expand production. The unemployed would find jobs again and could buy the products. This reasoning seems plausible. Nonetheless it is utterly wrong.

If commodities cannot be sold and workers cannot find jobs, the reason can only be that the prices and wages asked are too high. He who wants to sell his inventories or his capacity to work must reduce his demand until he finds a buyer. Such is the law of the market. Such is the device by means of which the market directs every individual’s activities into those lines in which they can best contribute to the satisfaction of the wants of the consumers. The malinvestments of the boom have misplaced inconvertible factors of production in some lines at the expense of other lines in which they were more urgently needed. There is disproportion in the allocation of nonconvertible factors to the various branches of industry. This disproportion can be remedied only by the accumulation of new capital and its employment in those branches in which it is most urgently required. This is a slow process. While it is in progress, it is impossible to utilize fully the productive capacity of some plants for which the complementary production facilities are lacking.

It is vain to object that there is also unused capacity of plants turning out goods whose specific character is low. The slack in the sale of these goods, it is said, cannot be explained by disproportionality in the capital equipment of various branches; they can be used and are needed for many different employments. This too is an error. If steel and iron works, copper mines, and sawmills cannot be operated to their full capacity, the reason can only be that there are not enough buyers on the market ready to purchase their whole output at prices that cover the costs of their current exploitation. As the variable costs can merely consist in prices of other products and in wages, and as the same is valid with regard to the prices of these other products, this always means that wage rates are too high to provide all those eager to work with jobs and to employ the inconvertible equipment to the full limits drawn by the requirement that nonspecific capital goods and labor should not be withdrawn from employments in which they fill more urgent needs.

Out of the collapse of the boom there is only one way back to a state of affairs in which progressive accumulation of capital safeguards a steady improvement of material well-being: new saving must accumulate the capital goods needed for a harmonious equipment of all branches of production with the capital required. One must provide the capital goods lacking in those branches that were unduly neglected in the boom. Wage rates must drop; people must restrict their consumption temporarily until the capital wasted by malinvestment is restored. Those who dislike these hardships of the readjustment period must abstain in time from credit expansion.

There is no use in interfering by means of a new credit expansion with the process of readjustment. This would at best only interrupt, disturb, and prolong the curative process of the depression, if not bring about a new boom with all its inevitable consequences.

The process of readjustment, even in the absence of any new credit expansion, is delayed by the psychological effects of disappointment and frustration. People are slow to free themselves from the self-deception of delusive prosperity. Businessmen try to continue unprofitable projects; they shut their eyes to an insight that hurts. The workers delay reducing their claims to the level required by the state of the market; they want, if possible, to avoid lowering their standard of living and changing their occupation and their dwelling place. People are the more discouraged the greater their optimism was in the days of the upswing. They have for the moment lost self-confidence and the spirit of enterprise to such an extent that they even fail to take advantage of good opportunities. But the worst is that people are incorrigible. After a few years they embark anew upon credit expansion, and the old story repeats itself.

This article is excerpted from chapter 20 of Human Action: The Scholar’s Edition.