David Mack was dying of strangulation in front of his horrified teenage sons while nearly a dozen Buffalo Police Officers looked on with indifference. The man who was killing Mack, Gregory Kwiatowski, was a member of their privileged tribe. The other cops at the scene understood that their duty was to protect the assailant, rather than to aid the victim.
“My father was laying there blue, I ain’t never seen him like that,” Wesley Mack later testified in court. “A lady cop went up to him and said, `Chill, Greg, you’re choking him,’ and she pulled his arm and he jumped up and popped her.”
“Get the hell off me, you black bitch!” snarled the uniformed embodiment of all that is good and decent, slugging the female officer in the face.
Mack had been arrested by Officer Anthony Porzio for “contempt of cop” after exchanging words with Officer Paul Sobkowiak, who had responded to a domestic disturbance report. A postal carrier told Sobkowiak that Mack had been withholding Social Security checks from his ex-girlfriend, who still received her mail at the address.
Sobkowiak called for backup and a throng of officers converged on the home. Commanded to turn over the check, Mack went into his house and retrieved what he claimed was all of the mail he had received that day. After the cops accused him of concealing the check, Mack told them to leave him alone. Defiance of that kind from a Mundane is impermissible, of course, so Sobkowiak attacked Mack, as did Kwiatowski and every other officer on the scene.
“Where one acts, all must follow,” is the unwritten but binding code of the Blue Tribe.
Horne was among the cops who responded to an “officer in distress” call. She didn’t see the initial assault, but when she arrived at the address she helped drag Mack out of the house. Like all police officers, she had been programmed to follow the code of the Blue Tribe without hesitation. Kwiatowski’s conduct caused Horne’s resilient human decency to rebel and overcome that programming.
Once Mack had been handcuffed, Kwiatowski decided to inflict summary punishment for the impermissible act of resisting arrest, beating the prone and helpless 59-year-old man. The assault quickly escalated to attempted murder as Kwiatowski turned Mack around and sank a chokehold.
There were, once again, nearly a dozen police officers on the scene. Horne – a tiny black woman who was roughly half Kwiatowski’s size — was the only one who assumed the role of peace officer by intervening to prevent the murder of an innocent man. The use of lethal force would have been justified, but Horne – once again acting as a peace officer – used proportionate force, even though in doing so she exposed herself to risk.
“I thought whatever happened in the house [Kwiatokski] was still upset about so when he didn’t stop choking him I just grabbed his arm from around Neal’s neck,” Horne recalled in a recent television interview. “He comes up and punches me in the face and I had to have my bridge replaced.”
Mack, who survived the assault, was hit with the predictable assortment of cover charges, which were just as predictably dismissed. Cariol Horne was charged with “obstruction” for supposedly “jumping on Officer Kwiatowski’s back and/or striking him.” 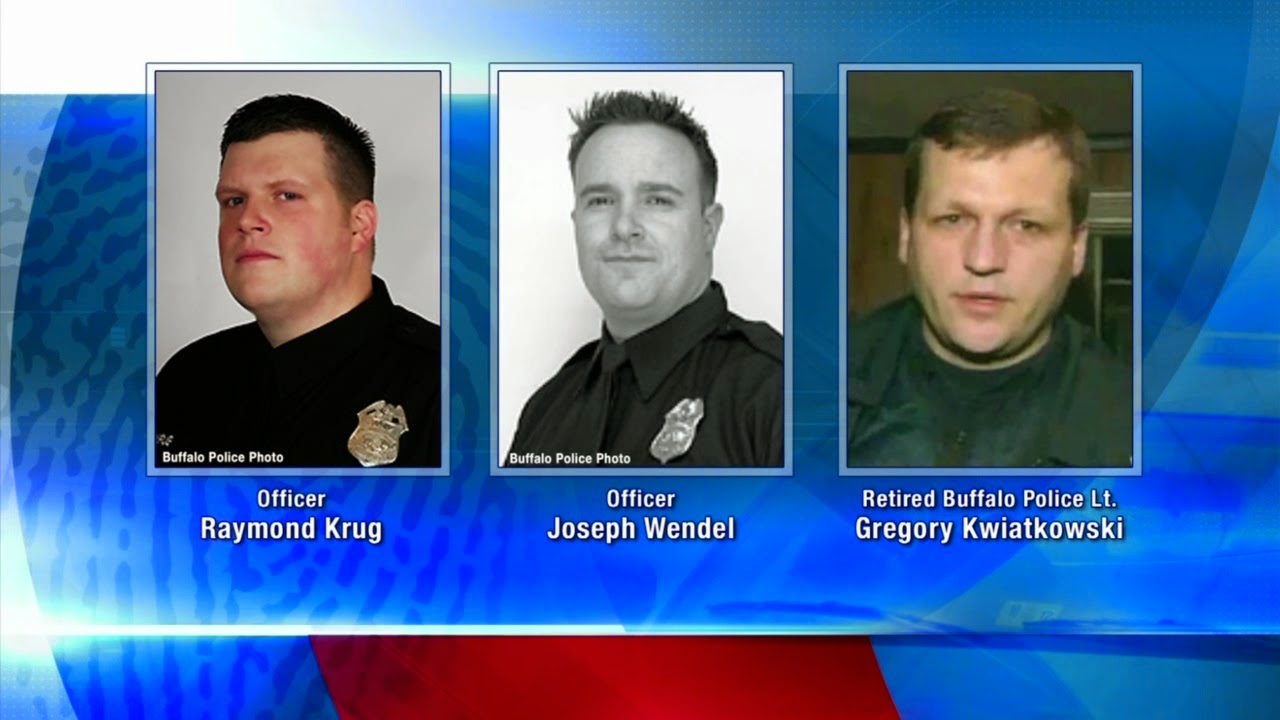 Kwiatowski himself admitted that although Horne intervened, “she never got on top of me.” The charge filed against her was as spurious as those lodged against Mack, and they served precisely the same purpose – namely, providing pseudo-legal cover for an act of official retaliation.
Horne, who eventually was fired as a result of the charge, was “obstructing” an attempted murder. She was upholding the law in the face of privileged lawlessness. Her experience uncannily echoes that of Regina Tasca, another veteran female officer who was purged from the force for “obstructing” criminal violence inflicted on a prone and helpless victim by a fellow cop, and that of Ramon Perez, who was punished by the Austin Police Department for refusing to carry out an unlawful order to use his Taser on a non-violent elderly suspect.
Significantly, the Buffalo City Government waited until May 2008 to terminate Horne. At the time she was two months from retirement, which means that she lost her pension. Among the “charges” upheld against Horne was the accusation that she had impermissibly told her story to the media.
Mack and his son Wesley, who was also arrested during the November 2006 police riot at their home, filed a civil suit against the police who assaulted and abducted them. A six-member jury ruled against them – five white jurors siding with the officers, the sole black panelist with the black plaintiffs.
Kwiatowski filed a defamation suit against Horne, which he won because the former officer — a single mother with young children to support – was too busy earning a living to appear in court. Horne found employment in the productive sector as a truck driver, an honorable profession that is considerably more dangerous that law enforcement.
When he wasn’t seeking revenge in the courts, Kwiatowski earned a promotion to Lieutenant through the conduct Horne had attempted to stop. He was eventually allowed to retire – with a full pension – at age 46 after several other episodes of criminal violence, including one in which he assaulted an off-duty NFTA Officer. That attack, appropriately occurred at a restaurant following a police union dinner. The victim admonished some of his comrades for being loud, vulgar, and abusive, and warned that other patrons were capturing the event on their cell phones. This violated the unwritten rules of the Blue Tribe, and Kwiatowsky inflicted what he considered to be the appropriate punishment.
Several months ago, Kwiatowski and three current members of the Buffalo PD were indicted by a federal grand jury for civil rights violations allegedly committed in 2009. Even apart from his subsidized retirement, Kwiatowski remains a burden on Buffalo’s tax victims.
Renewed scrutiny of Kwiatowski’s behavior was prompted, in part, by the suspension of Buffalo PD Officer Robert Eloff last May. Eloff was put on paid vacation after the department’s internal affairs division began investigating his role in a near-fatal assault on an Air National Guardsman at Molly’s Pub, a bar where Eloff was paid $25 an hour to moonlight as a security guard.
The victim, William Sager, suffered a traumatic brain injury after being pushed down a flight of stairs by the pub’s manager. Surveillance tape from the bar reportedly shows Eloff and the manager going into the room where the recording equipment is kept just shortly before the video went dark.  Rather than rendering aid to the victim, Eloff – in keeping with his training – handcuffed him in the interest of “officer safety.” A friend of the victim called 911 to report that they were being abused and harassed by Eloff and fellow Buffalo PD Officer Adam O’Shei, who was also working as a bouncer.
It should be understood that Eloff didn’t take a second job out of financial necessity. The 39-year-old tax-consumer was paid $106,300 last year, of which nearly $23,000 was overtime awarded for appearing in court. Eloff has long been regarded as one of the Buffalo PD’s most “productive” officers on account of his propensity for making arrests in volume, which – as his compensation figures demonstrate – is a singularly lucrative racket. 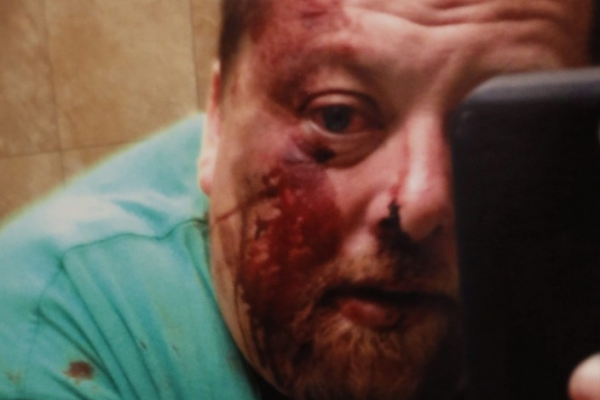 Eloff was also involved in the recent gang-beating of a man named Christopher Kozak, who was set upon by a thugscrum of at least a half-dozen Buffalo PD officers – and then left in a bloody heap on the sidewalk without being arrested or charged with an offense.
Amid these accumulating incidents of criminal depravity, Horne has renewed her campaign for vindication – not merely for self-interested reasons, but also to protect the public from the entitled, costumed bullies who prowl their streets.
“If the message they want to give is that an officer is going to be fired if they stop [abuse], then that’s the wrong message,” Horne observes.  Of course, that is precisely the intended message: A police officer who attempts to strangle a handcuffed and defenseless man can expect a promotion, but an officer who carries out her legal duty to prevent that murder can expect to be assaulted, criminally charged, and financially ruined.
The treatment endured by Cariol Horne provides some necessary context to the police murder of Eric Garner. Some authoritarian-minded commentators, seeking to defend that crime as a necessary vindication of “law” in the face of defiance, have sought to deflect the blame from Officer Daniel Pantaleo to his “black, female supervisor” – the latter description lacquered with facile irony by people desperate to define such issues in terms of racial collectivism.
The officer who was an accessory to the murder of Eric Garner achieved that position because she had been faithful to what former LAPD Officer Mike Rothmiller calls “the code of the Blue Tribe: When one acted, all must follow.”
Government law enforcement, as an institution, is defined by that ethic, which is why it cannot be reformed.
Click here to download or listen to the most recent Freedom Zealot Podcast.
For updates, follow me on Twitter.
If you can, please donate to help keep Pro Libertate online. Thank you, and God bless!