A “Deal” to Protect the Guilty: Bonneville County’s Indecent Proposal to Chris Tapp

A “Deal” to Protect the Guilty: Bonneville County’s Indecent Proposal to Chris Tapp

See the update below

Idaho Falls resident Christopher Tapp has spent more than two decades behind bars for a murder he did not commit. He was convicted on the basis of a confession extracted from him through psychological torture — a fact that even the Bonneville County Prosecutor’s Office has now grudgingly conceded. Now Bonneville County Prosecutor Danny Clark is reportedly seeking a face-saving plea bargain on the eve of a judicial hearing that would exonerate Tapp.
No physical evidence or eyewitness testimony connected Tapp to the scene of the June 1996 murder of 18-year-old Angie Dodge. Idaho Falls Police Sergeant Jared Fuhriman, who was lead investigator, initially sought to bully Tapp into implicating a friend — either Jeremy Sargis, whose family had the means to arrange for legal representation, or Ben Hobbs, who had been arrested in Nevada for rape. All three of these young men were excluded as suspects by DNA evidence.

Rather than following the evidence to a plausible suspect, Fuhriman and his comrades at the IFPD made do with the suspect that they had, isolating the 20-year-old from his family, and arresting him after his mother tried to contact an attorney.

Polygraph examiner Steven Finn, systematically lying to the victim, convinced Tapp that he was being “untruthful” in denying involvement in the murder, and that unless he offered a “truthful” confession he would face the death penalty. Only by admitting to a “limited” role in a crime committed by others, Tapp was told, could he save his own life.
Following a May 1998 trial replete with perjured testimony by Fuhriman and his colleagues, Tapp was convicted and sentenced to life in prison. At the time, Angie Dodge’s mother Carol believed firmly in Tapp’s guilt. Several years later, she examined the videotaped interrogations — and has now become the most passionate advocate for Tapp’s exoneration.

There are two separate appeals underway on Tapp’s behalf, both of which will be considered on April 25. The legal advocacy group Judges for Justice, which consists of retired judges, FBI investigators, and legal specialists, is preparing to present a detailed and overwhelming case for Tapp’s innocence. In doing so, they will place before the court, and the public, an equally voluminous case for decades of criminal misconduct by Fuhriman (who was subsequently elected Mayor of Idaho Falls), his associates in the Idaho Falls Police Department, and the Bonneville County Prosecutor’s Office. 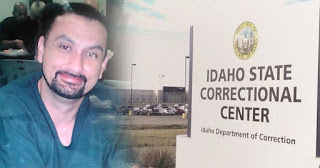 Tapp has been relocated to the Bonneville County Jail in Idaho Falls in anticipation of next month’s hearing — which means that Prosecutor Danny Clark and his minions will have more than a month to manipulate him into a plea bargain, which would be a bookend to compliment the process through which he was seduced into a false confession in January 1997.

Twenty years ago, Fuhriman and his comrades wanted to close a murder case to avoid an institutional embarrassment. Now, they want to wring the last full measure of usefulness from their victim by having him accept a deal that will protect them at the cost of his exoneration.

In a letter to Tapp, Judge Michael Heavey advises him that deal that would likely involve an Alford Plea – under which he would assert his innocence while admitting that the prosecutor could prove his guilt in court. This would allow Tapp to be sentenced to the time he has already served, and perhaps a brief term of probation.
“If you accept an Alford deal, then you spent 20+ years in prison for nothing,” Judge Heavey explained. “Fuhriman wins, [former Bonneville DA Kip] Manwaring wins, [assistant prosecutor John] Shindurling wins, Finn wins…. Chris Tapp loses 20 years.”

Anything short of complete exoneration “is a big loss for you,” Heavey advised him. “The prosecutor’s office has done everything they can to keep you in prison for the rest of your life, they are not honorable people. They have the leverage, for about one more month…. Don’t give in, you are an innocent man.”
The wrongful conviction of Christopher Tapp is just one of several cases — such as the equally bogus double-murder conviction of Lanny Smith, and the utterly bizarre rape conviction of Michael Whiteley — demonstrating the deeply dysfunctional nature of Bonneville County’s criminal “justice” system. The Tapp case, however, poses the most acute risk to the county’s political class: It has received national publicity, the victim is still a young man, he has influential advocates (including the murder victim’s mother), and his exoneration would lead to a civil rights suit he would easily win.
This explains why the County is desperate to have Tapp sign a deal and seal up the matter before next month’s hearing. In the fashion of the inquisitor presiding over William Wallace’s torture at the climax of Braveheart, Prosecutor Danny Clark — like his colleagues, a conservative and pious man — are urging their victim to acknowledge their divine authority as a condition of being released from his agony.

At one point during the lengthy (and, thankfully, video-recorded) process of manipulating Tapp into a false confession, Sergeant Fuhriman told the victim to look carefully at a religious icon the interrogator displayed as a tie-pin — a figure of the Angel Moroni, who is revered as a divine messenger in the Mormon faith. Fuhriman explained to Tapp that he was a Mormon Bishop (a position broadly congruent with that of a parish priest) and assured his victim that he would act as his”guardian angel” — while warning that he was also his “last hope.”

Fuhriman new that the DNA evidence at the murder scene had excluded Tapp. The police sergeant was also aware that Tapp’s utter lack of familiarity with the specifics of that crime, or the scene where it occurred, meant that he was being maneuvered into a false confession.

None of this mattered to Fuhriman, who — with his comrades Steven Finn and Ken Brown — preyed on the vulnerabilities  of their captive, weaknesses that Furhiman had come to know when he was prowling the halls of the junior high school Tapp had attended several years earlier.

Assistant prosecutor John Shindurling, who tried the case in May 1998, was present for an interrogation session during which Tapp’s captors systematically fed him details of a crime with which he had nothing to do. Shindurling would later assure the jury that only through direct involvement in that crime could Tapp have known those details. Fuhriman himself would directly perjure himself on the witness stand by making the same claim.

If Danny Clark were any part of a man, he would move to vacate Tapp’s conviction, and seek appropriate punishment for Fuhriman and his accomplices in this monumental crime.

In 1880, as her dispossessed people were being starved through the instrumentality of a corrupt Indian agent named James Wilbur, the heroic Sarah Winnemucca confronted that pious fraud. Wilbur, who was given to religious posturing, had accused Winnemucca of “putting the Devil” into the heads of the Paiutes by explaining how the agent had been making himself wealthy by embezzling money and supplies that had been promised to the desperate people over whom he had been given control.

“Mr. Wilbur, you forget that you are a Christian when you can talk so to me,” she told him in tones of well-earned, and tightly controlled, contempt. “You are starving my people here…. Everybody in Yakima City knows what you are doing, and hell is full of just such Christians as you are!”

Danny Clark, Jared Fuhriman, and their co-conspirators have implicated themselves in one of the most egregious criminal injustices in the history of Idaho. Everybody who has studied the case knows what they have done, and are doing now — and hell is full of such sanctimonious frauds as they are.

Update: The Bastards of Bonneville County Have Won

“A deal has been reached in the Christopher Tapp case,” reports today’s Idaho Falls Post-Register. Appellate attorney John Thomas, who will discuss the details of the arrangement today with prosecutor Danny Clark and Judge Alan Stephens in anticipation of a hearing tomorrow, says that Tapp will not admit guilt as part of the deal — which means, most likely, that the innocent man will take an Alford plea. This would mean immediate release from prison — but not from the underlying conviction. It would also protect Fuhriman and his accomplices in the kidnapping, torture, and theft of twenty years from Tapp.

The rape conviction will be vacated; the murder charge will remain, and Tapp will still be required to pay “restitution” for a crime he didn’t commit. This means that rather than being compensated by Bonneville County for the theft of his life, Tapp — a convicted felon with dismal employment prospects — will probably spend the rest of his life as an indentured servant, subject to wage garnishment and incarceration if he can’t make the extortion payments required of him.”Chris spent 20 years of his life convicted on a lie, and now he’s being released to live the rest of his life as a lie because people who have power can justify this,” observes Angie’s long-suffering mother, Carol Dodge. “They could care less what happens to Chris. All they cared about was having no liability.”

There must be, and will be, accountability for the crimes committed by Fuhriman and his comrades.

Be sure to visit the Libertarian Institute — which will be publishing my forthcoming book on the Christopher Tapp case.