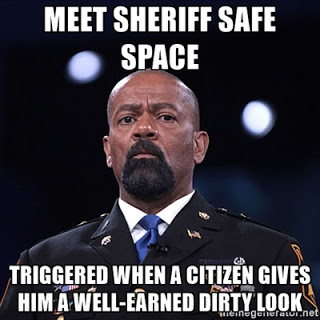 precious snowflakes, and one of the most self-enraptured petty tyrants in recent American history.
While settling in for a January 15 flight from Dallas to Milwaukee, Clarke – attired in Dallas Cowboys fan regalia – was asked by fellow passenger Dan Black if he was, indeed, the sheriff. When Clarke grunted in the affirmative, Black shook his head in well-earned disgust and proceeded to his seat. From behind, Black heard the truculent tax-feeder ask if he had a “problem,” to which the puzzled man shook his head in reply.
When Black disembarked at Milwaukee’s Mitchell International Airport, he was surrounded by a thugscrum of Clarke’s deputies, who detained and questioned him regarding his views of their boss. Black remained in custody until he was escorted from the airport.
After Black filed a complaint with the county commission, Clarke published the document on his department’s Facebook page – supplementing it with a threat to assault any other Mundane who gives him a dirty look.
“Next time he or anyone else pulls this stunt on a plane they may get knocked out,” advised the sheriff’s office. “The sheriff said he does not have to wait for some goof to assault him. He reserves the reasonable right to pre-empt a possible assault.”
A non-verbal gesture of disapproval is sufficient to trigger Sheriff Snowflake, who will summon his armed employees to enforce his safe space. 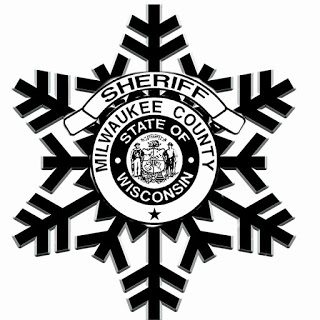 Threats of violence like the one made on Clarke’s behalf by his department have been prosecuted under 18 USC 875[c], which makes it a federal felony to threaten to injure someone if that threat is transmitted in “interstate commerce.”
Since Black is a witness in an active investigation that could lead to criminal charges, threatening him could also be construed as witness intimidation. (Idaho resident Matthew Townsend faced a patently spurious witness intimidation charge for publishing a Facebook post urging a police officer who had arrested him without justification to testify truthfully in a pre-trial hearing.)
Surrendering himself unconditionally to his irrepressible adolescent impulses, the sexagenarian sheriff compounded his felonious behavior with an overt threat to murder his victim. Clarke instructed his subordinates to create a meme of Black containing the caption: “Cheer up, snowflake – if Sheriff Clarke were to really harass you, you wouldn’t be around to whine about it.”
The Milwaukee County Commission’s ethics board is investigating Black’s complaint – and Clarke, behaving like a generalissimo in a third world junta, has ordered his deputies to obstruct the investigation, claiming that the commission doesn’t have the authority to investigate his office.
“In an act of political grandstanding, the political witch hunt continues by Democrat politicians and operatives,” pouted Clarke. “This is nothing more than an attempt to harass and bully Sheriff Clarke. This is fake news.”
Like too many others in his disreputable occupation, Clarke has mastered the art of simultaneously swaggering and simpering. He displays a similarly contradictory nature regarding his concept of “authority” – whence it came, and in whom it resides.
In chapter nine of his forthcoming ghostwritten book “Cop Under Fire,” Clarke answers a question nobody of consequence ever asked: “Why do I salute the audience when I speak?”
“I’m old school,” Clarke’s ghostwriter says on his behalf. “In our representative democracy, elected officials are not sovereign. You the people are sovereign. In keeping with military custom, it is incumbent on the subordinate officer to salute and render that salute first, to the superior officer. I consider myself the subordinate officer. That’s why I salute my audience, because they are in charge” – at least when that gesture serves the purpose of political stagecraft.
In every other context, Clarke clearly regards “civilians” as subordinate to the supposed authority of the state’s enforcement caste.
On page 241 of his book, the sheriff protests that elected officials “who have not been a cop one day in their life” have no right to demand reforms of internal disciplinary procedures. Police officers accused of abusing citizens – even when such abuse results in the clearly unlawful death of a Mundane – can only be sanctioned by superiors within their caste, Clarke insists.
As for Mundanes themselves, in any encounter with a member of the state’s punitive priesthood, they are to consider themselves the property of the officer until and unless he condescends to release them.
“When a law enforcement officer gives you a lawful command, obey it even if you disagree,” Clarke lectures his readers without explaining how a “subordinate” can “lawfully” give commands to a “superior.” “Though cops don’t have the final say, they have the final say in the moment within the law.”
Those who challenge that arrangement face potentially fatal consequences, he advises, referring to several cases illustrating that point, such as the murder of 12-year-old Tamir Rice by Cleveland Police Officer Timothy Loehmann, an individual whose timorousness and ineptitude made him unsuitable for any occupation involving the use of firearms.
Rice, who was carrying a pellet gun in a state where open carry of actual firearms is legal, was slaughtered by Loehmann two seconds after the officer and his partner pulled up to him in a public park.
Clarke insists that Rice – who, unlike Loehmann, was “within the law” — was to blame for his own death because he “didn’t think he had to obey the cops when they yelled, `Put your hands up.’” He ignores the fact that Rice didn’t have time to comply, because he simply cannot concede that an officer can ever be at fault in a deadly force incident.
Clarke is among the most shameless of Donald Trump’s jock-riders, and he blatantly campaigned to be appointed Commissar for Homeland Security prior to the selection of General John Kelly for the post. 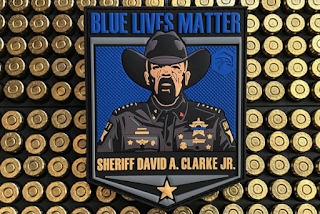 Like Trump, Clarke – who styles himself “The People’s Sheriff” — appears to embrace an idiot child’s version of Rousseau’s “social contract” concept: He sees himself as the embodiment of the “will of the people,” empowered to act in the name of the collective and accountable only to his own infallible insights regarding the collective will. Thus when it appeared last fall that Trump might lose the election, Clarke overtly called for insurrectionary violence – and after his god-emperor prevailed, Clarke has repeatedly called to crush all who oppose his reign – as well as indefinitely detaining up to one million people in Gitmo as suspected terrorists.
In both intellect and temperament, Clarke differs little from millions of other men of a certain age who enjoy juvenile dick-measuring displays and find partisan political conflict more effective than Viagra. What distinguishes him from the wretched likes of Bill O’Reilly or Sean Hannity (who is busily working his crayons to scribble out a foreword to Clarke’s book) is that Clarke has acknowledged his willingness to murder someone who offends him – and he has the means to make good on such threats.

Listen to this week’s Freedom Zealot Podcast for more on the misadventures of Sheriff Snowflake:

Please check out the Libertarian Institute — and be sure to tell your friends.