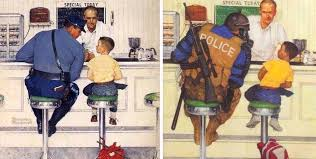 Adams Lin literally fainted as he read a court order authorizing federal marshals to confiscate his property. The officers seized his car, his designer clothes, a flat-screen television, golf clubs, computer, and even his treasured Samurai sword.

Unlike countless other Americans who have been pillaged by federal law enforcement officials, Lin was not a victim of the officially sanctioned plunder called civil asset forfeiture. His property was confiscated after Lin’s boss failed to make a $200,000 payment toward the $22.4 million civil damage award granted to a man who was left paralyzed through Lin’s occupational misconduct.

Lin’s boss is Palm Beach County, Florida Sheriff Ric Bradshaw, and he has adamantly refused to make payments to Dontrell Stephens, who was shot by Lin after the panicking deputy mistook the 19-year-old’s cell phone for a gun.

“There’s nothing in the rules of engagement that says we have to put our lives in jeopardy to wait and find out what this is and get killed,” whined Sheriff Bradshaw on the day of the shooting. His department quickly exonerated Lin and promoted him – before the public release of video that proved that the victim had never posed a threat to the deputy.

Rather than complying with the court order, Bradshaw filed an appeal. After the award was upheld last May, Bradshaw appealed again – which triggered an injunction leading to the seizure of property from the deputy who was directly responsible for the unlawful shooting of an innocent teenager. Owing to his service as an asset of the state’s punitive apparatus, Lin was able to get his confiscated property back. His victim, of course, remains paralyzed.
Lin continues to be held in high regard by Bradshaw, which is why the sheriff selected him to be one of seven sergeants from his department assigned to the presidential security detail at the Palm Beach Airport during the president’s recent visit. 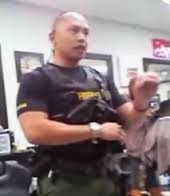 This obviously wasn’t a reward for Lin’s exceptional valor. The deputy’s pants-wetting meltdown that led to the near-murder of Stephens, and his fainting spell triggered by enforcement of the court order, demonstrate that he’s hardly Horatius at the bridge in dealing with adversity. It was a gesture of calculated contempt toward those who believe that police officers should be held accountable for personal misconduct, and an assertion of the institutional sense of entitlement that characterizes law enforcement – and that has been reinvigorated by the current occupant of the Oval Office.

Donald Trump has repeatedly described the privileged personalities who constitute the state’s punitive caste as “the most mistreated people” in society. In a recent exercise in self-pity published by the cyber-journal Law Officer, Major Travis Yates of the Tulsa Police Department embellishes Trump’s claim, complaining that law enforcement officers are the victims of what he calls “The New Discrimination in America.”

Police officers are occasionally assaulted, and on austerely rare occasions murdered on-duty – much less frequently, as it happens, than they were under the reign of the last self-described law-and-order president, Ronald Reagan. Those who lend credence to Yates’s jeremiad, however, would believe that the desecrated bodies of police officers can be found dangling from hanging trees throughout the length and breadth of this hate-intoxicated, ungrateful land.

“From slavery to the KKK to Jim Crow laws, nothing much has changed in this country,” he intones. “We continue to hate and we continue to kill and the only difference now is we are doing it to those in uniform.”

This ambient violence sometimes leads people to shun police officers in restaurants, or call them “vile and hateful names.” A similarly grievous illustration of what he invites the reader to pretend is unconscionable anti-cop bigotry was an executive order by Barack Obama placing modest limits on the transfer of war-fighting materiel from the Pentagon to local police agencies.

Like many others in the self-described Blue Lives Matter movement, Major Yates confuses a chosen occupation – one involving the state-sanctioned exercise of aggressive violence — with an innate characteristic. He also ignores the critical distinctions between hateful and spiteful verbal abuse — on one hand — and the forceful criticism of officials who are, or at least should be, accountable to the public they claim to serve.

Yates does understand the essential nature of the occupation he has chosen. In a previous essay, he complained that citizens who are urging police to rediscover the lost skill of de-escalation in encounters with citizens are demanding that “police stop being police.”

“Follow the commands of a police officer, or risk dying,” Yates snarled, expressing the discretionary power to kill that was not enjoyed or exercised by slaves or those subject to Jim Crow laws.  From his perspective, only aberrant bigotry could motivate those who take issue with the fact that police consider themselves invested with that power, or criticize them when its exercise is manifestly indefensible.

Once clad in the habiliments of the state’s punitive priesthood, police expect and demand deference from Mundanes. Recent studies conducted by a team of cognitive neuroscientists at McMaster University suggest that the mere act of donning the official costume alters the way those thus attired – in this case, students, rather than police officers – view people who are regarded as socially marginal or otherwise “problematic.”

It is incontestable that once an individual swaddles himself in police attire he begins to assess everyone who surrounds him in terms of potential threats to “officer safety.” It is likewise clear that the relatively modest occupational risks of police officers are amplified by the requirement that they enforce measures that are innately illegitimate.

Missouri State Trooper Beau Ryun, to cite a perfectly suitable recent example, was “assaulted” by 22-year-old Jonathan Timmons during a recent traffic stop, and was rescued by the intervention of a motorist named Charles Barney and a 74-year-old woman identified only as “Sandra.” That’s as far as the story will be recounted in most re-tellings: A heroic paladin of public order was viciously attacked, and was rescued by two “civilians,” who have been nominated for “honorary trooper awards.”

Little if any attention will be paid to the prelude of this altercation.

Timmons, a resident of New York State, was not suspected of an actual crime against person or property. He was stopped by Trooper Ryun because of a “lane violation.” If the vehicle had not displayed out-of-state license plates, it’s quite possible that Ryun would have ignored this trivial transgression. Owing to the perverted priorities of prohibition, however, traffic infractions of this kind are coveted, because they provide opportunities for drug arrests and asset forfeiture.

Timmons, unfortunately, was far too cooperative following Ryun’s pretext stop, agreeing to sit in the patrol vehicle while the trooper conducted a consent search. When Ryun reached for the handcuffs, Timmons decided to fight back. His offense was morally indistinguishable from that of an escaped slave who “assaulted” an officer enforcing the 1850 Fugitive Slave Law – Deputy U.S. Marshal James Batchelder, to cite one example.

Batchelder was killed by an abolitionist posse seeking to liberate a man named Anthony Burns, who had been “lawfully” arrested by the marshal for rendition to the Virginia man who claimed to “own” him. Yes, Burns violated the “law” by escaping from involuntary servitude. In similar fashion, Timmons broke the “law” by being in possession of marijuana, and by resisting state-sanctioned abduction by an armed stranger.

Deputy Marshal Batchelder’s name is inscribed on the honor roll of law enforcement officers killed in the line of duty. Those who compile such rosters do not inquire into the legitimacy of the statutes whose enforcement led to the deaths thus tabulated, or consider whether killing or dying to enforce them is justifiable.

Timmons faces six criminal charges, including felonious assault on a “special victim.” Yes, Missouri is among the SSRs within the American soyuz that formally designate police as a “specially protected class.” Over the past two years, law and order conservatives who otherwise abhor the concept of “hate crimes” have proposed, and sometimes enacted, hate crimes statutes that enhance penalties for crimes against police officers.

In Louisiana, for example, citizens can now be charged with a “hate crime” under that state’s Blue Lives Matter statute, which was signed into law last year. Two bills being reconciled in the Mississippi State Legislature would have the same impact.

House Bill 645, titled the “Back the Badge Act of 2017,” would triple the penalties for committing an act of violence against law enforcement officers or other first responders (who are included in the bill in order to expand its constituency, not because of an outbreak of violence against firefighters or EMTs). A similar measure, Senate Bill 2469, the “Blue, Red, and Med Lives Matter Act,” has passed that chamber of the state Legislature. That bill designates police and other first responders as a specially protected class for the purpose of hate crimes prosecution. Mississippi state law currently doubles penalties for crimes targeting people belonging to specially protected classes.


The Fraternal Order of Police and other police unions have been agitating for federal “hate crimes” legislation for the benefit of law enforcement, and Donald Trump is eager to oblige them. His recent executive order instructs newly installed Procurator General Jeff Sessions to “pursue appropriate legislation … that will define new Federal crimes, and increase penalties for existing Federal crimes, in order to prevent violence against Federal, State, tribal and local law enforcement officers.”

With three exceptions – piracy, counterfeiting, and treason – “federal crimes” do not exist under the constitutional framework, which likewise does not authorize the federal government to investigate and punish violations of state laws. Self-described constitutionalists once regarded such considerations as important.

Just months ago, the “law and order” constituency was denouncing the President of the United States for seeking to “federalize” law enforcement. Now that same cohort is offering full-throated approval of the president’s eagerness to expand federal involvement in local law enforcement – and to federalize prosecution of people accused of criminal offenses resulting from encounters like the one involving Jonathan Timmons and Trooper Ryun.

After spending Barack Obama’s reign denouncing his regime as the distillate of despotism, right-collectivists are eagerly applauding the enhancement of state power under a president with whom they can identify.

Statists of all varieties remain committed to Lenin’s formula, under which the fundamental political question is “who does what to whom.” The “what” in that equation – the exercise of essentially illimitable state power – remains intact; the “who” and “whom” have simply exchanged places. Somewhere in hell, Lenin is kvelling.

The same Regime that promises border security has been known to vet refugees for the purpose of recruiting terrorists — but what should we expect from a system based on demographic central planning? This week’s Freedom Zealot Podcast:


Please be sure to check out the Libertarian Institute.