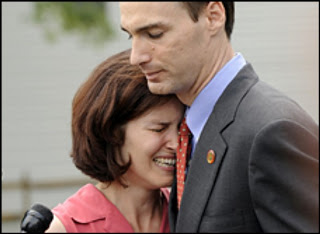 Victims of the Regime’s Narco-Terrorism: Cheye Calvo (right) and his wife Trinity.
There’s no way to know how badly things would have gone at the Berwyn Heights, Maryland home of Cheye and Trinity Calvo if Amir Johnson hadn’t shown up when he did.

Johnson, a private on the local police force, was making his accustomed rounds in the neighborhood when he saw a swarm of heavily armed men laying siege to the Calvo home. Inside, Cheye and his mother-in-law, Georgia Porter, were being held face-down at gunpoint with their hands tied behind their backs. The Calvo family’s two black Labradors, Chase and Payton, were dead from gunshot wounds. The assailants who killed the dogs were leaving bloody bootprints throughout the home.

This home invasion was, of course, a law enforcement operation, typical of “no-knock” drug raids conducted practically every day across the country. The most significant difference wasn’t that Cheye Calvo was completely innocent of involvement with narcotics; innocent people are terrorized and killed by drug raiders all the time. The key distinction here is that Mr. Calvo is Mayor of Berywn Heights. That’s one reason why Officer Johnson intervened to help.

“That guy in there is crazy,” one of the stormtroopers complained to Johnson as he emerged from the crime scene (that is, the scene of a crime committed under color of state “authority”). “He says he’s the Mayor of Berwyn Heights.”

“That is the Mayor of Berwyn Heights,” Johnson told assailant, a member of the Prince George’s County police department (which has overlapping jurisdiction with the town police). Johnson quickly contacted Berywn Heights Police Chief Patrick Murphy to tell him that a SWAT team had just laid waste the the Mayor’s home and killed the family’s dogs. Glancing around, he couldn’t see any evidence of a search warrant. Inquiries about this omission were greeted with the assurance that the document was “en route.”

Then, rather than continuing on his daily rounds, Officer Johnson stayed put, in order to make sure that Mayor Calvo and his mother-in-law weren’t mysteriously hurt or killed.

“Not that I don’t trust the police,” Johnson later commented to the Washington Post. “But I wanted to personally witness what [was] going to happen to my mayor, so if they [the SWAT team] say this guy went for a gun — and he didn’t — it’s not going to happen on my watch.”

Roll that comment around in your mind for just a second.

Officer Johnson stayed behind to make sure his mayor wasn’t murdered by his fellow police officers. A few days later, long after the raiders failed to find so much as a molecule of evidence to justify their criminal assault on the Calvo home, Chief Murphy publicly expressed exactly the same sentiments. Addressing a rally on behalf of the victims, Murphy pointed out that the SWAT team declined to notify him about the impending raid, which would have permitted the Chief to help them arrange a peaceful, orderly search of the property.

“I never imagined, when I set out to protect people from the crooks and criminals, that I would have to protect them from by fellow police officers,” Murphy regretfully declared. Granted, it’s entirely unfair to consolidate cops and crooks into one undifferentiated group. Police are far more dangerous to innocent people.

Prior to the assault on the Calvo family last July 29, narcotics investigators had discovered that local drug dealers had been shipping drug-laden packages to the addresses of innocent people and then intercepting the packages before the residents picked them up. In mimicrky of that tactic, drug investigators deposited a package on the Calvo family’s front step, and then sent in a SWAT team to collect it.

Prince George’s County Police officials later maintained that the forcible entry — the use of a battering ram to break down the door, followed by the cuffing of Calvo and his mother-in-law, Georgia — was “justified” because Georgia let out a scream when she saw masked, heavily armed men scurrying across the front lawn.

Apparently, being terrified when confronted by state thugs employing terrorist tactics justifies the use of those tactics. In a variation on that rationale, police officials insisted that killing the dogs was the proper course of action because the labs “engaged” the SWAT team by barking at them. 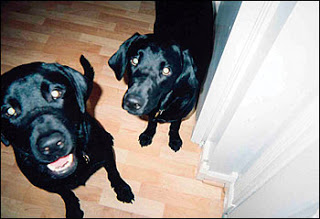 Rest in peace, Payton and Chase.

There’s no evidence that either dog bit or otherwise harmed or threatened the police; in fact, one of them was shot from behind, which would make it terribly unlikely that the dog had “engaged” the SWAT team. A thorough inspection of the home turned up only one item worth confiscating: The same box of marijuana the narcotics officers had planted on the Calvo family’s doorstep. Nobody involved in ordering or executing the raid has been fired, sanctioned, or punished in any way. Georgia continues to show symptoms of post-traumatic stress disorder. The Calvo family lost their dogs, and had to spend countless hours scrubbing the bloodstains from their home. 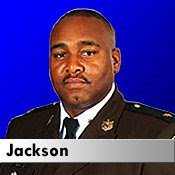 After having their lives thrown into violent disarray by the raid, Cheye and Trinity — with the help of a very astute attorney — had to take pre-emptive measures to protect their reputations following the raid. They got no help at all from the Prince George’s County Police. Displaying the familiar mixture of arrogance and contempt that suppurates from police bureaucrats in such circumstances, Chief Melvin C. High and Sheriff Michael Jackson (no, really) refused to apologize to the Calvo family or publicly exonerate them after the police had apprehended the people responsible for the drug package scheme.

As Calvo points out, “police can do what they did to us with impunity. There are no consequences, not for them.” But once again, it could have been immeasurably worse. Imagine how the same incident might have turned out had Cheye Calvo not been the mayor, and had Officer Johnson not been willing to keep the SWAT team under surveillance. Johnson himself points out that Calvo could conceivably have been murdered by the uniformed marauders as a way of justifying the raid after the fact. Another possibility is that “evidence” could have easily been “discovered” to justify the seizure of the Calvo family’s home for the purpose of forfeiture — which is the entire purpose of such raids in the first place.

This year, Price George’s County expects to spend $2.5 million collected last year through drug-related forfeiture. Drug enforcement raids of the kind that terrorized the Calvo family have no documentable impact on the availability of drugs. They do, however, help generate revenue for local governments. Here’s how the racket functions:

Special enforcement units round up small-caliber drug users or dealers for use as informants and provocateurs; these “reliable informants” then provide tips that are used to justify no-knock raids on people identified as drug dealers. This leads to the seizure of cash or valuable assets that can be stolen in the name of “civil asset forfeiture,” thereby slopping tax-feeder troughs that may start running low as the current depression unfolds.

Maryland, one of the most government-afflicted states in the Union, has likewise been plagued with this variety of corrupt, predatory “drug enforcement.” Just recently, the wire services carried news of a lawsuit filed by Daryl A. Martin, a 35-year-old football coach who was accosted on the streets of Baltimore by an “elite” Special Enforcement Team (SET) of the notorious Baltimore Police Department.

Martin recalls that he was on the way to a tailor shop when he was pulled over and swarmed by several police officers, who — without probable cause or even bothering to supply a reason — searched his car and then subjected him to what amounted to a public strip search.

After frisking Martin’s buttocks and genitals through his clothing — while making lewd and disgusting comments — Officer Shakil Moss reportedly forced Martin to strip below the waist, then, after putting on a clear plastic glove, performed a body cavity search in front of a stunned crown of onlookers. Martin, understandably, describes the experience as akin to being raped.

“I think this group of officers randomly pulled over and searched dozens of people a day,” comments Martin’s attorney, Steven D. Silverman. “If they found something, the altered the statement of charges to make [the search] appear constitutional. If they found nothing, they would send you on your way.” Martin’s suit against the Baltimore PD is the second to be filed in the wake of the now-disbanded SET’s rampage.

Even before the suits were filed and the team was closed down, dozens of cases built on evidence and testimony provided by the SET were thrown out. But so far, none of the officers has been cashiered from the force; instead, they were simply handed new assignments. While relatively uncommon, incidents of this kind are not aberrations; they are the logical, predictable result of the incentive schedule produced by the Regime’s “War on Drugs.”

Conducting drug raids is immensely lucrative and (official propaganda notwithstanding) exceptionally low-risk. And there are no significant negative career repercussions for most police officers who make mistakes — even when they involve well-respected civic officials like Cheye Calvo. If the Anointed One’s “stimulus package” passes intact, we’re likely to see a huge escalation in officially sanctioned criminal violence of the kind suffered by Daryl Martin and the Calvo family. 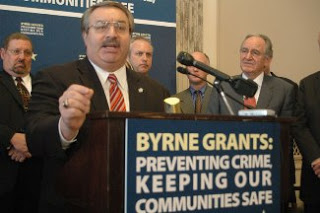 Obama’s $900 billion wad of socialist boodle includes $3 billion for the federal Byrne Justice Assistance Grant program, as well as another $1 billion to revive the Clinton administration’s Community Oriented Policing (COPS) program. Both of those initiatives will expand federal subsidies of — and, thereby, federal control over — “local” law enforcement, thereby further diminishing whatever remains of local accountability. The Byrne Grant program is the deadlier of those two subsidies, not merely because it’s significantly larger but also because its raison d’etre is to fund counter-narcotics programs.

This means more money for criminal gangs in uniform like Baltimore’s Special Enforcement Team, or the Campbell County, Tennessee outfit that beat and tortured a small-time drug dealer for several hours to force him to sign a “consent” warrant for the search of his home. It means more money for tax-funded snitches, and for no-knock SWAT raids that will leave innocent people terrified or dead. It appears that we’re being introduced to a new variety of Keynesian socialism. First, there was Welfare State Keynesianism, then Military Keynesianism, followed by Reconstruction Keynesianism – you know, the pleasant business of propping up foreign dictators, bombing their countries into rubble, and then ladling out “cost-plus” contracts to politically connected contractors to “reconstruct” those countries. Now we see the advent of Police State Keynesianism.

Byrne funds are disbursed as block grands to the states, which means that they are distributed at the discretion of state governments. Every effort is made to keep this process opaque by burying the specific funding mechanisms as deeply as possible.

Although the rest of us may not have the benefit of advance warning, it will be easy to deduce where the Byrne Grant funds are flowing. We’ll just follow the trail of blood.

Justus and Korrin are both doing well. His arrival, and the necessary preparations for it, help explain my recent absence, for which I apologize. I am deeply grateful for all of the wonderful and thoughtful suggestions that came in reply to my request for baby names, and I promise to post photos as soon as possible.