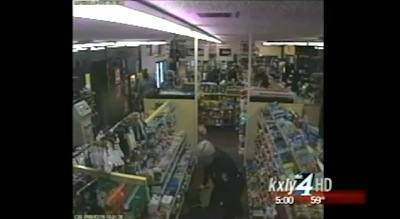 Otto Zehm, a mentally handicapped, 36-year-old unemployed janitor, was beaten to death in a Spokane convenience store in March 2006.

“All I wanted was a Snickers bar,” pleaded the battered and bloody man before he was gagged by his assailant.

On November 4, Karl Thompson, the man convicted of killing Zehm, was taken to jail.  Several dozen members of Thompson’s gang were gathered outside the courtroom – most of them proudly wearing the colors – to “show their honor” by offering the murderer a public salute. Thompson – whose hands weren’t cuffed, in violation of long-established rules – smiled and returned the gesture.  Zehm’s still-grieving mother and several other relatives stood just a few feet away.

The gang in question is the Spokane Police Department, which even now refuses to acknowledge that Thompson – who was a nominee to become Chief at the time he murdered Zehm – ever did anything wrong when he clubbed, tased, and suffocated a terrified, innocent man who did nothing to provoke the attack, and who put up no violent resistance to the assault. 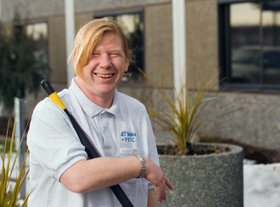 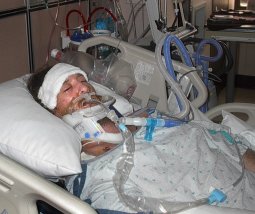 A little more than a year after Otto Zehm was murdered by Thompson and his cohorts, 37-year-old Trent Yohe, the father of a young child, was beaten, tasered, and hog-tied by Sheriff’s deputies who had illegally entered his home.
Yohe was asleep when the deputies invaded his home. The last words he heard before lapsing into an irreversible coma were orders from his assailants to stop resisting.
Shortly after the incident, Sheriff Ozzie Knezovich admitted in an official memo that at the time Yohe – a known meth addict subject to Grand Mal seizures – “was never under arrest.” The County eventually paid $50,000 stolen from local tax victims to settle a lawsuit filed by Yohe’s family.
The deputies who murdered Yohe followed almost exactly the same protocols used by the murderers of Otto Zehm a year earlier. Sheriff Knezovich defiantly insisted that he saw no reason to change those procedures.
This isn’t to say, however, that the Sheriff was categorically opposed to reform: In a joint press conference with Chief Kirkpatrick, Knezovich indignantly protested the use of the term “hog-tied” to describe the method used by officers to truss their prone and helpless victims; the appropriate term, he insisted, is “hobbled.”
That prompted Seattle Spokesman-Review columnist Doug Clark to compose a lexicon of law enforcement euphemisms.
In keeping with Sheriff Knezovich’s delicate sensibilities, Clark suggested that language like the following would be suitable: “Trent Yohe, a methamphetamine addict, was holiday gift-wrapped after a spirited difference of opinion with sheriff’s deputies.” What about the eyewitness report that deputies had kicked out the victim’s false teeth? Easy: Yohe wasn’t brutalized – he “participated in a police-assisted dental plan.” And henceforth, a Taser will be called a “joy buzzer.”
Clark’s essay was aimed at the Spokane PD’s institutional vanity, a target that’s impossible to miss. This prompted Officer Preuninger – who wept openly when Thompson was taken away to jail — to rebuke the impudent
Mundane via a letter to the editor in which the decorated SWAT team leader struck the familiar pose of policeman-as-maligned savior.
“Sleep well, Mr. Clark, because no matter how much you insult me, no matter how low you go to belittle my profession, if you find yourself in harm’s way, you need only call and one of us will come and risk our life to save yours: an irony I am quite sure you can never fathom,” whined Preuninger in a tone worthy of a passive-aggressive teenage girl.
As is almost always the case in such matters, it is Officer Preuninger who suffers from a severe irony deficiency: None of the officers he trained intervened to save Otto Zehm when that innocent man was being beaten to death by Karl Thompson, who was a “mentor” to the entire force and their preferred candidate to be chief.
Following Thompson’s guilty verdict, U.S. Attorney Mike Ormsby asserted that “This is not an indictment of our entire police force.” Oh, yes it is.
Thank you, once again!
On behalf of the entire Grigg family, I want to tell you how much we appreciate your very generous donations. This means more than I can adequately express. Have a wonderful Christmas!

Be sure to check out Republic magazine: 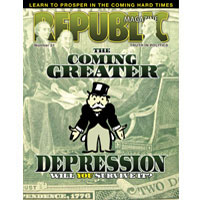