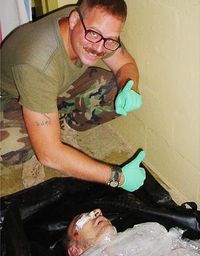 Most of the harm in the world is done by good people, and not by accident, lapse, or omission. It is the result of their deliberate actions, long persevered in, which they hold to be motivated by high ideals toward virtuous ends… [I]n periods when millions are slaughtered, when torture is practiced, starvation enforced, oppression made a policy, as at present over a large part of the world, and as it has often been in the past, it must be at the behest of very many good people, and even by their direct action, for what they consider a worthy object.

Isabel Patterson, “The Humanitarian With the Guillotine,” from The God of the Machine, 1943 (emphasis added)

He often describes himself as a “rodeo clown,” which is less an act of self-deprecation than an attempt to create a viral marketing meme. I grant that Beck does remind me of something one can find at a rodeo, if one is foolish enough to lift the tail of the nearest equine.

Several months ago, during what passed for the congressional debate over torture, Beck’s radio program featured a call from a husky-voiced man with a Deep South accent identifying himself as “Mitch.” This individual explained to Beck that he was a professional torturer – or, as he preferred to describe his profession, an “intelligence extractor.”

Intrigued, Beck – his voice filled with the same giddy eagerness one would expect from a pubescent boy invited to look for the first time at dirty pictures – asked “Mitch” to elaborate on the techniques he had used.

“Well, with simple masking tape or duct tape, you dilate the eyes, and they you use halogen lamps, and a person is placed in a rigid position where they cannot move,” the torturer related. “Their eyes are opened and the halogen lamps, you know, they’re producing 40,000 watts. It’s intense. And that breaks them down. High-pressure water — I mean, you’ve heard the term `drinking from a fire hose.’ I wouldn’t do that. That generally wouldn’t extract what you want, and usually would drown somebody quickly. But you can use high-water pressure into one ear, and when that first ear drum is broken with, you know, 14 or 15 hundred pounds of water pressure going in, the don’t — they will talk before that second ear drum is broken.”

All of this was stated with arid professional detachment. This clearly wasn’t someone overwrought with moral ambivalence.

“I did know a contractor that [sic] did drilling on live teeth,” “Mitch” continued. “You know, well teeth. And you’ve seen that before in different movies.” 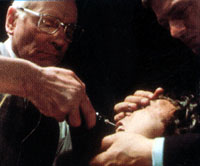 Presumably, “Mitch” was referring to “Dr. Christian Szell,” the Nazi war criminal played by the late Sir Laurence Olivier in Marathon Man. Which means that he was implicitly – and quite correctly – drawing a parallel between the Bush Regime’s torturers and those who plied that trade on behalf of National Socialist Germany.

“Did you ever accidentally kill somebody?” asked Beck in the same Flounder-from-Animal House-squealing- “Oh, boy is this great!” voice.

“No — I made them wish they were dead,” “Mitch” replied. “You know … my most successful use of any technique was high-pressure air. You just think of a small [high] velocity hose with 1,200 PSI [pounds per square inch] of air coming through it. I don’t know if you’ve ever heard a hose with that much pressure go off, but once — your ears immediately bleed. One ear blown completely out, and you don’t have to do the other one…. It’s like your head exploding inside is what we always thought….”

Although “Mitch” didn’t ask for it, Beck was willing to offer him absolution.

“Do you ever have a hard time sleeping at night?” asked the self-described Rodeo Clown.

“No,” replied the serial mangler.

“Good for you,” Beck exclaimed. “I mean, good for you. Is it because you did it for the country?”

After “Mitch” replied in the affirmative, Beck pronounced the expected benediction:

“Mitch, I’ve got to tell you I appreciate your service…. I have to tell you, when all is said and done, I’m glad people like you are on our side.” 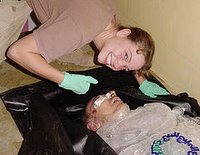 What I have to say is this:

“Mitch” is a war criminal, and he should be prosecuted as such, along with the executive branch officials who cut his orders, and the “Justice” Department lawyers who wove the web of sophistry supporting those orders. (Yes, we’re coming for Yoo, John.)

Is “Mitch” what we would call a “good” man (bearing in mind, of course, that we are authoritatively told that there is no Good save One)? Probably. He sounds like any one of several hundred people I have met at football games or in similar settings. Most likely he goes to church when he can, maybe works as a volunteer Scout leader, shovels snow from his neighbor’s steps – and then flies off to Gitmo or Abu Ghraib or the Salt Pit or heaven only knows where else to mutilate the retinas and ear drums of people who most likely have done nothing to harm us in any way.

Where does “Mitch” hail from? His accent and inflection, as I noted above, suggest the Deep South, perhaps North Carolina. This would fit very well with the findings of Trevor Paglen and A.C. Thompson, authors of Torture Taxi – a study of the Regime’s far-flung torture network, particularly the clandestine airlines that ferry victims to various “black sites.”

In an interview promoting their book, the authors make note of two rural towns in North Carolina, Smithfield and Kinston. These small towns host many of those involved in the “extraordinary rendition” of people abroad to be tortured, and it’s likely that at least some of those residing in the area have hands-on experience of the sort “Mitch” described.

“We went there and talked to a pilot who had worked for Aero [a CIA-operated rendition airline] about exactly what they did and how the program worked,” they recall. “There’s nothing random about the CIA using this rural area in North Carolina. If you wanted to shut up a secret operation, this is where you would do it. It’s a God, guns and guts area.”

Which is to say it’s full of “good Americans” (I use that expression, alas, in the same way the phrase “good Germans” was once used – yes, it’s come to that) of the sort who react to torture with the same thoughtless, reflexive approval Glenn Beck displayed.

“What you start to figure out by spending time in Smithfield is that a lot of people know about the company and have at least an inkling of what goes on at the airport,” continued the authors of Torture Taxi. “Most don’t want to talk about it and don’t take a critical view of it.”

This is not to say that the inhabitants of Smithfield and Kinston were of one accord regarding the supposed merits of torture.

“Folks we met there framed the debate within this religious discourse,” the authors recount. “The [anti-torture] activists that we talked to were God-fearing devout Christians who felt like this was not what they signed up for as religious people, that it violates the religious tenets they adhere to. Interestingly, folks on the other side of the debate seem to be coming from a similar place, but just coming to a different conclusion. The subject of whether or not torture was permitted by the Bible was discussed in church there–and many congregants believed it was.”

I would find it interesting – if only in an anthropological sense – to hear a sermon or Sunday School lesson devoted to the theme of what the Bible says in favor of torture.

This would be a formidable challenge, given that the dominant Figure in the New Testament was One who urged His followers to turn the other cheek, who (with the exception of the time He cleansed the temple) never lifted His hand except to bless or heal another, and – here’s the most important consideration – who was subjected to every variety of torture the depraved human mind could devise before being nailed to a cross to die. And crucifixion, of course, was a form of death-by-torture.

I’m not saying it’s impossible to find people capable of the feats of eisegesis necessary to find a “biblical” rationale for torture. I am saying that people of that sort couldn’t possibly be genuine believers in Jesus of Nazareth.

These small North Carolina communities, the writers of Torture Taxi observe, are burdened “with this open secret that nobody wants to talk about. It shows what’s going on culturally. When a country starts doing things like torturing and disappearing people, it’s not just a policy question, it’s also a cultural question.”

This is exactly right: We are contemplating a sickness that transcends mere politics, and it can’t be cured simply through political means.

Which is why this prescription offered by my former employer is both tardily offered, and inadequate to deal with the affliction that was documented, most recently, by horrifying disclosures from Guantanamo Bay:

“Until 2001, the United States was an outspoken critic of torture and prisoner abuse in other nations. This was because the concept of torture runs counter to the moral compass of the American people, not to mention being at odds with the nation’s Christian understanding [of individual dignity]….Now, unfortunately, it has been the U.S. that has engaged in these practices. It falls now to the citizens of the Republic to reassert the goodness of America through pressure on Congress to repeal inappropriate and unconstitutional legislation, to investigate crimes conducted by government officials and to put right the abuses of the last few years.” (Emphasis added)

This oddly structured (and factually infirm — the U.S. Government was in the torture business long before 2001) quasi-admission of shared responsibility reminds me of George W. Bush’s reaction to the first disclosures from Abu Ghraib. Standing next to Jordan’s King Abdullah II, Bush expressed sorrow for the “humiliations” of the Iraqi victims and their families, but said he was ”equally sorry that people seeing these pictures didn’t understand the true nature and heart of America.”

The problem with that statement, and the one from my former employer cited above, is this: The acts of torture – physical mutilation, psychological torment, sexual debasement – have been carried out by “good” Americans; they were authorized by officials elected or appointed by “good” Americans; and they have been, and continue to be, countenanced by tens of millions of “good” Americans.

As things stand, these acts do not appear to be alien to the “true nature and heart” of at least much of America. Which means that there is something seriously defective in the “moral compass” of the same American public upon which we are to rely for a political remedy.

Nothing of any consequence can be done to rectify the political problems that have led to the creation of an American Torture State until the underlying cultural and moral problems are dealt with.

This will require something robustly unpopular in every age, an activity for which nobody has any appetite at all: Repentance.

“[T]he torture of any human being for any reason – as is now so widely practiced by the beasts who call themselves Communists – is morally far worse than even cold-blooded murder.”

Robert Welch, founder of the much-maligned John Birch Society, from his 1970 essay “The John Birch Resolutions.”

I have been honored to receive a brief comment from Ramon Perez, the outstanding former Austin Police Officer fired for his “unsuitable” Christian and constitutionalist convictions. Please keep Perez and his beautiful family in your prayers.