A few nights ago, at the end of a day devoted to productive and pacific pursuits, after you had surrendered to a few hours of well-earned sleep, the people who presume to rule us raided your bank accounts.

No, I’m not referring to the Regime’s ability to monitor your financial transactions, a power displayed to dramatic effect in the prostitution sting that ended Eliot Spitzer’s lamentable career. Yes, you’ve probably been subject to totalitarian scrutiny of that sort at some point as well, but that’s a topic for another occasion.

Right now, I’m talking about the Federal Reserve’s most recent wealth redistribution plan, through which hundreds of billions of “dollars” will be created in an effort to stave off bank failures — an effort that will not succeed.

To create this so-called “money,” the Fed has to steal the value of what each of us has earned, saved, or invested.

Imagine how outraged you would be to learn that a thief had stolen your identity and used it to siphon your savings in small, subtle increments, until you and your family are driven into destitution.

The dollar’s value vs. Swiss franc over the past six months: When the dollar’s trend-line begins to look like an Alpine ski run, you know things are getting nasty.

This is exactly what the Fed and the Regime it serves are doing to you right now — bleeding your wealth with silent implacability. Over the past six months alone, the “dollar” has shed one-fifth of its value (as measured against other currencies). Run the math, which is simple enough for even Sean Hannity to understand (assuming that we s-p-e-a-k r-e-a-l-l-y s-l-o-w-l-y and illustrate our points with pretty pictures): At that rate, by mid-2010, the dollar would be entirely worthless.

But there’s no reason to assume that the decline will continue at its present rate. None at all.

Things will only get worse from here.

Some analysts keep warning that the dollar may abdicate its role as the world’s reserve currency, thus mimicking the trajectory of the last global imperial currency, the British pound.

These warnings were timely half a decade ago. They are badly out of date now: The dollar has already lost that status for merchants in Manhattan, investors and entrepreneurs in India, peasants in Bolivia, businessmen in Brazil … that is, in the view of people who work, earn, save, and invest and have the option of conducting their affairs in currencies other than the Hegemon’s increasingly worthless fiat scrip. 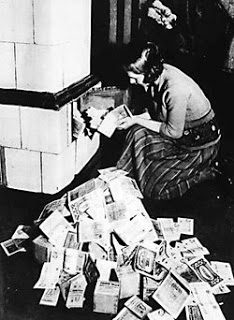 At least they burn: A German housewife finds a suitable use for her country’s useless currency during the hyperinflation of 1923. Some have suggested at least one other possible use for fiat currency, but unfortunately it’s neither soft nor absorbent enough.

James Howard Kunstler, whose blog is as indispensable as its tragically appropriate name is unpronounceable in polite company, dispels the booming, buzzing confusion and lays bare the stark reality of our predicament:

“The US faces a pretty stark choice right now: it can let the losers take their losses — both the big institutions who created and traded in fraudulent securities, and all the “little guys” who borrowed too much money trying to get rich quick, or trying to live like the millionaires they see on TV. We can let them go down, and suffer the consequences of their bad choices (and maybe prosecute some of the culpable bankers and corporate executives); or, in an effort to let these losers off the hook we can wreck the whole machinery of capital by making our medium-of-exchange worthless.”

“The people in charge — both in and out of government — can’t face the losses, so for now they’ve apparently decided to wreck the currency,” he concludes.

Those people know what they’re doing, and they understand the inevitable result. Alan Greenspan, who deserves to taken to the Great Pit of Carkoon and there be fed to the Sarlacc,**
has admitted that the economy he manipulated for decades is headed “over a cliff” (which, if you’ll forgive me for belaboring a point, is where Greenspan should be headed — right over a cliff and into the remorseless beak of the all-powerful Sarlacc).

A few weeks ago Greenspan advised Arab investors to flee from the dollar he had debauched. The course being followed by his successor, Ben “Auto-Gyro” Benanke, is intended to insulate the wealthiest and best-connected members of the corporatist elite while exposing the rest of us to ruin. 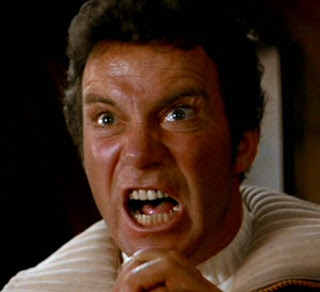 “I shall leave you as they left Weimar Germany: Marooned in a dead economy … buried beneath inflated currency…”

Why aren’t we incensed by this? Where are the rivulets of rage that would eventually coalesce into one mighty, cleansing flood of fury?

Sure, Americans get pissed whenever they see the price of gas vaulting to new highs, or find that their grocery bill has suddenly and dramatically put on weight. They get bent out of shape when they go to the local Big Box Mart and find that the promised “low prices” are suddenly steeper than they expected. They’re increasingly anxious with each passing month, as the essentials of living become increasingly expensive, despite soothing assurances from our rulers that “inflation” is negligible. 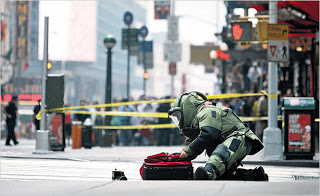 Sure, we’re permitted –nay, encouraged — to worry about stuff like this: A bomb disposal officer inspects a backpack accidentally abandoned near Wall Street. We have the Regime’s permission to take alarm over “threats” of this kind, as it suffocates our liberties and obliterates our wealth.

And as the American middle class founders in debt, the ruling caste has never done better.

Consider the job performance of Congress since 2001. Through a combination of native corruption and emasculated deference to an overtly dictatorial Chief Executive, Congress has created the most imponderable government debt in history. It has permitted our nation to become mired in two distant wars of attrition, with a final estimated price tag of something in excess of $3 trillion. It has annihilated the Bill of Rights and common law due process protections while abetting the malignant growth of a militarized garrison state. It has institutionalized torture, the ne plus ultra of tyrannical depravity.

If job performance of this kind were subject to market discipline, practically everybody on Capitol Hill (with at least one noble exception) would be reduced to selling plasma. Instead, the incumbents who have wrought this disaster enjoy almost unassailable job security, making themselves wealthy while leaving productive people impecunious. Between 2004 and 2006, the net worth of the typical Congressbeing increased by 84 percent; the median net worth of senators was $1.7 million, that of the lowly tribunes of the masses in the House a mere $675,000.

Granted, politics has always been a lucrative profession, in the worst sense of that expression. Previous republics have degenerated into kleptocratic empires and succumbed to both financial and moral. But that historic perspective should whet our outrage, rather than blunting it.

“That public men publish falsehoods Is nothing new. That America must accept Like the historic republics corruption and empire Has been known for years. Be angry at the sun for setting If these things anger you.”

With all due respect — and much of it is due — to the author of those words, there was nothing inevitable about our nation’s descent into empire. And yet … here we stand, at the brink of utter ruin.

Why aren’t we furious about this?

_____
*I use the term “dollar” here in reference to Federal Reserve Notes for the sake of conversational convenience. Since being deprived of its connection to gold, the currency issued by the Federal Reserve has ceased to be a dollar in any authentic sense.

**Within the Sarlacc’s digestive tract, Greenspan would “find a new definition of pain and suffering as [he is] slowly digested over a thousand years.”