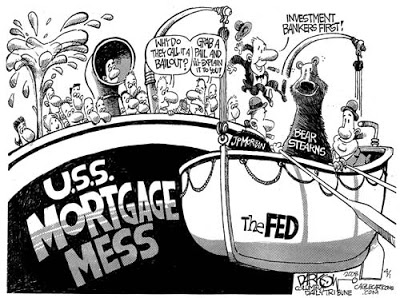 Compelling confirmation that we’re in the early phase of a world-historic economic collapse can be found in this fact: Our rulers are moving quickly to redistribute blame for the disaster from those who precipitated it to those who are seeking to protect themselves from it.

In the fashion of Stalin deflecting blame for the failure of central planning onto the backs of faceless “wreckers” or randomly selected “saboteurs,” the Regime in Washington is literally preparing to criminalize the act of “talking down the economy.”

If you’re an investment broker caught speaking ill of the federal bailout of Fannie Mae and Freddie Mac, or advising your clients to short those two federally supported deadbeat institutions, you could incur the wrath of the Securities and Exchange Commission.

Under the Clap-for-Tinkerbell assumptions being imposed on the markets by the Regime, such actions quite likely will be designated a form of “market manipulation” — what the SEC, in a July 13 press release timed to coincide with Commissar Paulson’s bailout announcement, called “the intentional spread of false information intended to manipulate securities prices.”

“Spreading false information,” in this context, means “the publication of facts incompatible with the Regime’s priorities,” which at present means “bolstering confidence” in the terminally insolvent, fatally corrupt fascist entities called Fannie Mae and Freddie Mac. 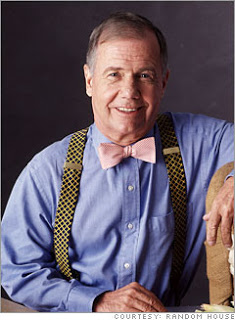 This is why legendary investment guru Jim Rogers was asked, in a July 15 CNBC interview, if he was “talking down” Fannie and Freddie. Rogers breezily acknowledged he has been “short” on them for three or four years, and is in the same position regarding “a lot of banks.” The SEC’s advisory against spreading “false information” was followed on July 15 by an emergency order from the SEC curtailing short selling in financial stocks, particularly those of Fannie and Freddie.

That fact that an executive branch agency can simply issue such an order (or, in this case, reiterate an earlier order), with the supposed force of law, should prompt at least some people to ask: in what sense are the investment markets a form of “free” enterprise?

Jim Rogers can afford to be candid about his successful investment strategy, given that he has fled the proto-totalitarian United States for the relatively free shores of authoritarian Singapore. Other honest investors are not so fortunate.

Yesterday (July 16) the SEC began issuing subpoenas to wreckers … er, “market manipulators” suspected of contributing to the collapse of Bear Stearns and the 78 percent drop in Lehman Brothers’ share value so far this year. As far as the SEC is concerned, we’re not dealing with people who make an honest living, so truth is not going to be considered a suitable defense for those accused of propagating “false information” about Fannie and Freddie, or any other entities on the receiving end of federal bail-outs.

And of course, it will avail nothing to invoke sound logic by pointing out that the SEC is an enforcement instrument of a Regime guilty of wholesale “market manipulation,” with plans for much, much more of the same. With Fannie and Freddie now assured of a place on the lifeboat, we can expect many others to fall in line — Lehman Brothers, Goldman Sachs, Bank of America, Detroit’s “Big Three”…. Federal bailouts will be an immense boon to bond-holders, while wiping out shareholders. The former group includes the wealthiest and most powerful investment houses in the world; the latter includes the retirement plans of millions of small investors who are already being devoured alive by inflation.

SEC Chairman Christopher Cox explains that the Stalinoid crack-down on short-selling and propagation of “false” information is a “preventive” measure intended to prevent catastrophic bank runs. “If an institution is to fail in the marketplace, it should be for legitimate reasons based on the market’s appraisal of objective information,” insisted Cox, leaving the rest of us gagging on the stench of his hypocritical sanctimony. “It should not be based on the deliberate manufacture of false information and illegal naked short selling. We’re simply trying to remove tools of mischief so that markets can operate efficiently.”

The “efficient” operation of the marketplace, apparently, demands nothing less than giving nineteen failing financial institutions special access to the Federal Reserve’s “discount window” — making them the immediate beneficiaries of currency and credit inflation that will literally steal the bread from the tables of working Americans — and then swaddling them in immunity from market discipline by prohibiting investors from acting rationally based on the obvious implications of such federal intervention. 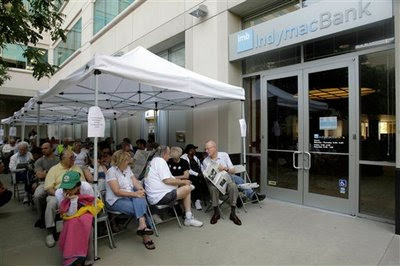 Perfectly rational panic: Depositors line up at the Encino, California branch of the failed IndyMac Bank, eager to withdraw their savings.

Apparently, American investors have a patriotic duty to be bullish on those financial institutions favored by the Regime — and, starting next Monday, confront the prospect of ruinous SEC investigations and other harassment should they be found insufficient zealous in pumping up those collapsing entities.

Meanwhile, the FBI is pursuing a separate but complimentary track by investigating the possibility that fraudulent mortgage loans contributed to the collapse of California’s IndyMac Bancorp, which — after being nationalized — is operating under the name of IndyMac Federal Bank. 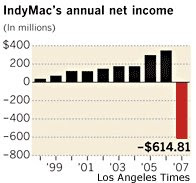 That fraud was involved in the failure of IndyMac — and the impending collapse of dozens or hundreds of other institutions — is indisputable: It was, after all, a satellite of the Federal Reserve. The FBI is an appendage of the Regime, so it will dutifully focus on purported fraud committed at the retail level by individual mortgage officers, rather than dealing with the wholesale fraud carried out as a matter of policy by the Federal Reserve.

The purpose of these enforcement actions, once again, is to fortify “confidence” in the financial markets in order to avoid bank runs. But the markets are not entitled to our confidence, and a comprehensive run on the banks and the markets is really the only rational course of action — that is, panicking now, before we’re given official permission to panic, by which time it will be too late.

It is because they didn’t panic in a timely fashion that many investors and depositors in IndyMac are now caught in what the Los Angeles Times correctly calls a “financial hostage drama.”

They’re told that their money is “safe” now that it is in an institution owned and operated by the FDIC, only to learn that the funds they need are “frozen.” This means, of course, that the money is “safe” from being used by those who earned it and to whom it properly belongs.

Not surprisingly, this news has riled up many of IndyMac’s depositors, who are now being told that they must accept the federal impoundment of their money with grace and equanimity, lest they be seized and incarcerated by the local branch of the Homeland Security State (still quaintly known to many as the “local” police). 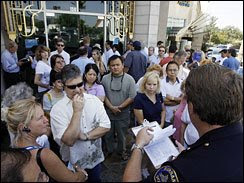 Remember when police used to pursue thieves? In an increasingly familiar role, Los Angeles police personnel aid the robbers by threatening to arrest any victims who don’t remain properly calm and docile as their life savings are plundered at the newly nationalized IndyMac Bank.


I suppose it’s not unprecedented for the wealthy and powerful, in their eagerness to comandeer lifeboats on behalf of their “kind,” to shove aside women and children aside.

The new wrinkle in this catastrophe is the requirement that those denied access to the lifeboats, and forcefully discouraged to take any individual action to save themselves, are required to maintain a cheerful, grateful demeanor even as they begin the long, frigid descent into the abyss.