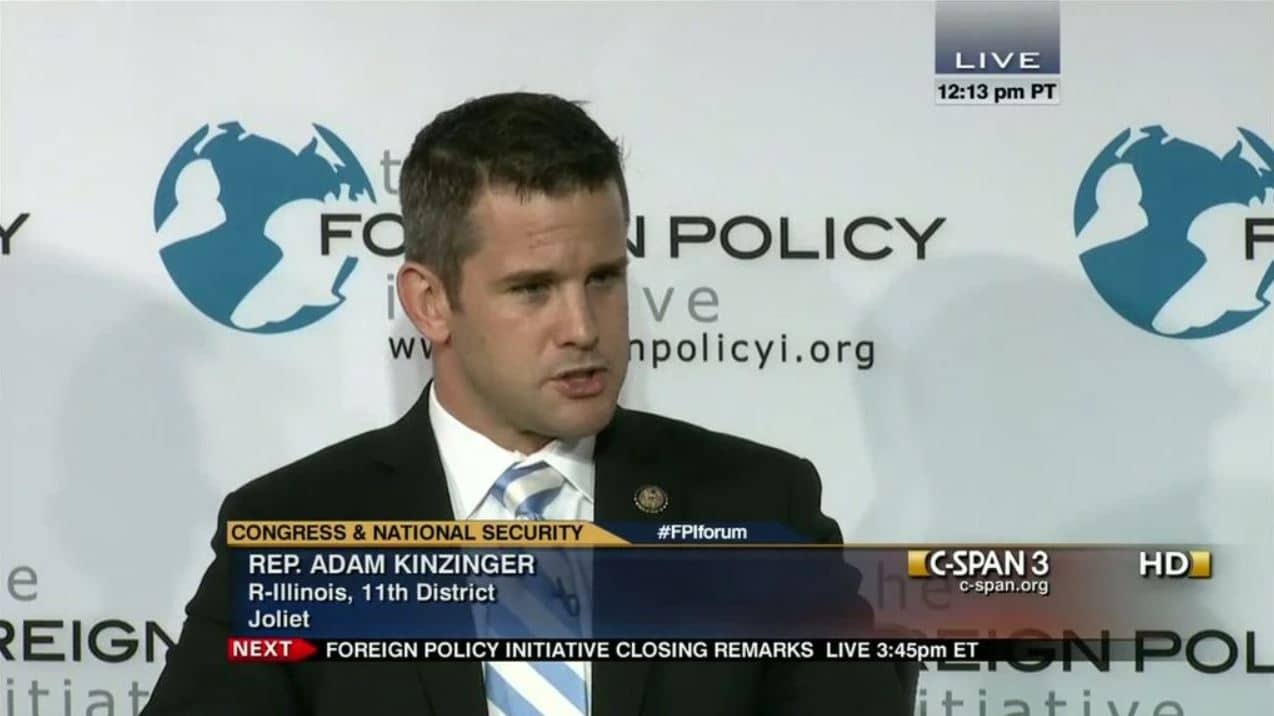 As the war in Ukraine approaches its tenth week, the steady flow of ominous headlines has grown to a floodwater deluge. Dissenting observers are made to watch, seemingly helpless, as the broader levy of sanity threatens to break, unleashing a torrent of death and destruction across Eastern Europe, and likely, the globe.

Leading the bad news cycle, on Sunday, May 1, Congressman Adam Kinzinger proposed a new Authorization of Use of Military Force (AUMF) in the U.S. House of Representatives. The legislation, if passed, would allow President Joe Biden to deploy American forces to restore “the territorial integrity of Ukraine” in the event that Russia uses chemical, biological, or nuclear weapons. When Kinzinger announced the legislation on Meet the Press, he stated that he “doesn’t think we need to be using force in Ukraine right now.” However, as Antiwar.com opinion editor Kyle Anzalone ominously noted, in 2002, then-Senator Joe Biden similarly downplayed the danger of war before voting for the 2002 AUMF—under which President George W. Bush later prosecuted the invasion of Iraq.

If bad Ukraine policy amounts to a downpour, Rep. Adam Kinzinger has been performing a rain dance for years now.

Kinzinger was elected to the U.S. House of Representatives in 2010. In March 2014, while sitting on the House Foreign Affairs Committee, Kinzinger pledged that the House would back the Obama administration’s efforts in Ukraine. Further, he stated the House would consider legislation calling for increased aid to Ukraine, up to and including adding Georgia and Ukraine into NATO. Kinzinger’s pledge came soon after the conclusion of the 2014 Euromaidan Coup, where the US State Department played an instrumental role in ousting then-president Viktor Yanukovych. By April, 2014, Ukraine would launch a civil war against pro-Russian separatists in Ukraine’s eastern Donbas region. In 2016 Kinzinger co-authored H.R. 5094, the Stability and Democracy for Ukraine Act (the STAND for Ukraine Act). On September 21, 2016, the STAND for Ukraine Act passed the U.S. House unanimously by voice vote. It was engineered to “contain, reverse, and deter Russian aggression in Ukraine, to support the sovereignty of Crimea against Russia’s illegal annexation, and to ultimately assist Ukraine’s democratic transition.” The STAND for Ukraine Act cemented sanctions as a permanent fixture of American policy by making it “effectively…impossible to remove certain anti-Russian sanctions unless Crimea is returned to Ukraine.”

Since Russia’s February 2022 invasion of Ukraine, Kinzinger has repeatedly pushed to escalate a situation that his policy helped to create. On March 3, 2022, he publicly called for a “no-fly zone” over Ukraine to “prevent Russian air attacks.” If enforced, a no-fly zone in Ukraine would see U.S. forces shooting down Russian planes and even attacking targets in Russia. 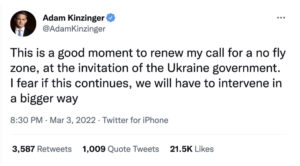 Kinzinger’s corresponding press release cited his experience piloting an intelligence aircraft in Iraq as being some sort of qualification for such a daft and dangerous proposition:

Representative Kinzinger understands what being a hero means…Maybe Congress and President Joe Biden should listen to him. Kinzinger thinks that war with Russia might be inevitable. We would have the advantage now when few people would die. It looks as if we will find out.

Indeed, through his years advocating—near universally—for an aggressive U.S. foreign policy, Kinzinger has been immersed in the neoconservative think-tank circuit.

On March 24, 2014, Kinzinger joined the American Enterprise Institute (AEI) for a panel discussion involving arch-neoconservative Fredrick Kagan. During the panel, Kinzinger “underlined the…potential dangers associated with leaving [Afghanistan]” in the wake of the Karzai government.

For all the seven years of U.S. support for the Kabul government between Kinzinger’s 2014 panel appearance at AEI and his April 15, 2021 reprisal, the withdrawal had the same predictable result. In a matter of weeks, the Afghan National Army washed away like water breaking upon stone. The Kabul government disintegrated with it.

In 2022, nearly nine months after the withdrawal of U.S. troops from Afghanistan, the “potential dangers” Kinzinger foretold have failed to materialize—at least for the American public. Instead, Afghanistan has vanished from the U.S. news cycle. The AEI, who so loudly virtue-signaled for the rights of Afghanistan women, is now silent about the consequences of the twenty-year U.S. war there—except to the extent that it could be used to justify even further intervention. Beyond AEI, on May 26, 2016, Kinzinger attended an event hosted by the ultra-neoconservative Foreign Policy Initiative and The Hudson Institute. He stated:

Our involvement in NATO is not because we just want to defend Europe out of the goodness of our heart, but because without NATO we never would have been able to drop the Iron Curtain and bring freedom to millions of people and make us safer…Are there challenges? Of course. But that needs to be done in the context of “how do we get NATO reengaged” versus “let’s just get out of the rest of the world. That’s a narcissistic foreign policy.”

The Foreign Policy Initiative was founded in 2009 by Weekly Standard editor Bill Kristol and Brooking’s Institute Fellow Robert Kagan. In the 1990s, Kristol and Kagan founded the now-infamous Project for a New American Century are largely credited as being architects of the Global War on Terrorism.

Robert Kagan’s wife, Victoria Nuland, served as assistant secretary of state during the 2014 Euromaidan Coup in Ukraine. In a leaked phone call with the then-U.S. ambassador to Ukraine, Nuland lamented the European Union’s decision to limit its involvement. She then stated “Yats is the guy, he’s got the economic experience,” referring to opposition leader Arseniy Yatsenyuk. The first prime minister of the post-Madian interim government was none other than Arseniy Yatsenyuk. The Hudson Institute is:

part of a closely-knit group of neoconservative institutes that champion aggressive, Israel-centric U.S. foreign policies. Founded in 1961 by several dyed-in-the-wool Cold Warriors, including Herman Kahn–a one-time RAND nuclear war theorist notorious for his efforts to develop “winnable” nuclear war strategies [emphasis added]. Kinzinger has also spoken at the Atlantic Council, a think tank that has long pushed increasing confrontation between the US and Russia over Ukraine. It is funded, to the tune of millions, by weapons manufacturers, the UAE, the Rockefeller Foundation, Goldman Sachs, Facebook, JP Morgan–Chase, and Palantir.

While it is unclear exactly how much influence the above-named think tanks have had on Kinzinger’s policy positions, it is clear that Kinzinger has played a starring role in escalating diplomatic tensions between the U.S. and Russia over Ukraine.

Is our best hope another twenty-year, society-eating slog? Or will the NeoConservatives’ Ukrainian denouement detonate a flash ending?