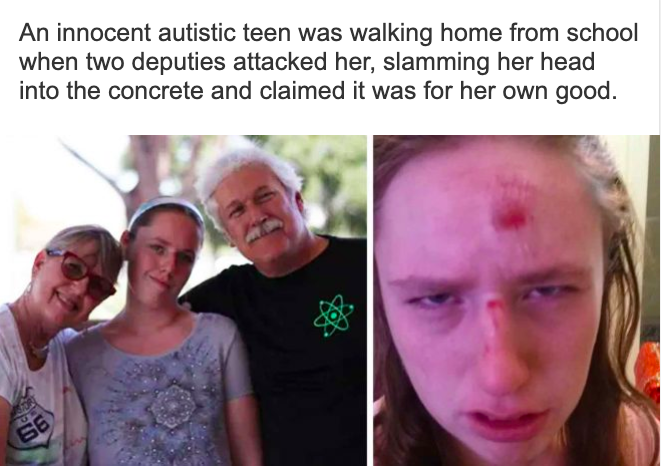 Riverside County, CA — Michelle Chartrand is a 19-year-old woman with autism who has never harmed a fly, much less committed a crime. However, because police officers opt for training in escalation of violence instead of how to interact with special needs individuals, she fell victim to police brutality and was treated like a murder suspect. As she walked home from school last year, Chartrand was attacked by police, tackled to the ground, and injured—by police who claim they were trying to save her.

On Friday, Chartrand filed suit in U.S. District Court alleging that the beating and treatment she received at the hands of the Riverside County sheriff’s deputies amounted to violations of her constitutional rights and the Americans with Disabilities Act.

As the Desert Sun reports:

“On Aug. 30, 2018, Chartrand was dropped off by her mother at Summit High School in La Quinta to attend a job training for people with learning disabilities. Soon after arriving, two Desert Sands Unified School District security officers received reports that Chartrand had left campus and was walking home, according to the complaint.

Chartrand told The Desert Sun last year that she struggles with academics, grew upset during the training and decided she needed to walk to her home, which was about three blocks from the school.”

As she walked home from school, school security officers called the police for some reason. When the deputies showed up, all hell broke loose.

As the two deputies approached the 19-year-old — who had committed no crime and had done nothing wrong — the tensions started to rise. As the deputies confronted her, Chartrand tried to simply walk around them because they were blocking her path home.

Instead of allowing the autistic teen to walk home, however, the deputies physically assaulted her, grabbing her by the arm. It is common knowledge that individuals with autism do not like to be approached by strangers much less touched or grabbed by them. The lawsuit specifically notes that people with “autism do not like being grabbed or touched, as even a slight touch can cause great anxiety, discomfort, and even physical pain due to their disability.”

Nevertheless, this is exactly what happened.

According to the lawsuit:

“Plaintiff Michelle Chartrand—an autistic member of the Riverside community—suffered injuries as a result of an encounter with law-enforcement officers at her school. Despite having no reason to forcibly detain and arrest Plaintiff—and fully aware of her disability—officers for the Riverside County Sheriff’s Department wrestled with Plaintiff, tackled her to the ground, handcuffed her, and caused her head to strike the concrete pavement. Plaintiff suffered injuries as a result. She requests a jury trial to pursue justice on the claims detailed in this complaint.”

After the incident, police justified the savage treatment of Chartrand by claiming they were trying to save her and even patted themselves on the back for their brutality.

“The officers attempted to contact the woman, however, she walked past one of the officers and onto Fred Waring Drive, directly toward the morning traffic,” Chris Willison, who was a sheriff’s department spokesperson after the incident. “Thanks to our officer’s quick response, the woman was pulled back to the roadway edge. However, she struggled against our officers’ efforts to keep her out of traffic and they were forced to detain her in handcuffs.”

But according to Chartrand, she was doing everything legally until the deputies showed up and attacked her.

“I pressed the crosswalk button and waited for the walking icon to pop up,” she told The Desert Sun last year. The sheriff’s deputies “thought I was acting crazy, but I wasn’t. I looked both ways before I crossed the road.”

After she’d been attacked, injured, and held against her will, the school’s principal arrived at the scene and told the deputies that Chartrand was a special education student, according to the complaint. She received medical attention for her injuries and her mother picked her up later. She was not charged with any crimes.

Reprinted from The Free Thought Project