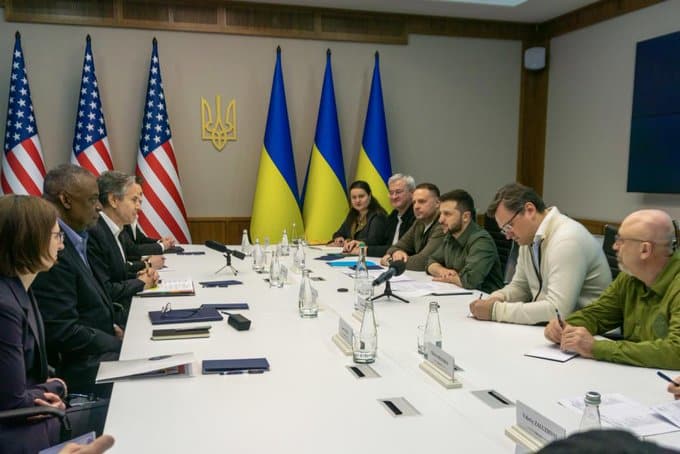 On Sunday, Secretary of State Antony Blinken and Secretary of Defense Lloyd Austin became the highest-ranking US officials to visit Ukraine since Russia invaded on February 24. During meetings with Ukrainian President Volodymyr Zelensky, the officials promised more support for a war the White House hopes will weaken Moscow.

While in Kiev, Blinken informed Zelensky the White House authorized over $700 million in assistance to finance weapon sales and approved a sale of $165 million in “non-standard ammunition” for Ukraine.

“The United States intends to obligate more than $713 million in Foreign Military Financing (FMF) for Ukraine and 15 other Allied and partner nations. More than $322 million in this obligation is for Ukraine and will provide support for the capabilities Ukraine needs as Russia’s forces train their focus on the Donbas; this assistance will also help Ukraine’s armed forces transition to more advanced weapons and air defense systems. This assistance will also help NATO Allies with backfilling capabilities they have donated to Ukraine from their own stockpiles.”

Since Russian President Vladimir Putin authorized “special military operations,” the US supported Ukraine with $3.7 billion in security assistance. The pace is accelerating, with $2.3 billion in military support approved within the past two weeks. The recent weapons packages include more advanced weapons such as Howitzers and drones.

On Monday, Blilken and Austin spoke with the press in Poland about their trip to Kiev. The Defense Secretary said the US goals stretch beyond defending Ukraine’s sovereignty. “We want to see Ukraine remain a sovereign country, a democratic country able to protect its sovereign territory. We want to see Russia weakened to the degree that it can’t do the kinds of things that it has done in invading Ukraine,” Austin told reporters.

Last week, Turkish Foreign Minister Mevlut Cavusoglu told CNN Turk some NATO member states want the war in Ukraine to last longer because they believe it will weaken Russia. “There are countries within NATO who want the war to continue,” Cavusoglu said. “They want Russia to become weaker.”

The Washington Post has also highlighted this trend of NATO members that prefer war to peace. On April 5th, the Post reported, “for some in NATO, it’s better for the Ukrainians to keep fighting, and dying, than to achieve a peace that comes too early or at too high a cost to Kyiv and the rest of Europe.”