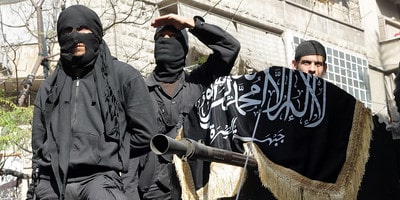 Members of jihadist group Al-Nusra Front take part in a parade calling for the establishment of an Islamic state in Syria, at the Bustan al-Qasr neighbourhood of Aleppo, on October 25, 2013. The conflict in Syria, which erupted after President Bashar al-Assad launched a bloody crackdown on Arab Spring-inspired democracy protests, is believed to have killed more than 115,000 people. AFP PHOTO / KARAM AL-MASRI (Photo credit should read KARAM AL-MASRI/AFP/Getty Images)

The Islamic State attacked a large refugee camp in American-controlled Syria. The battle between ISIS and Kurdish forces left four dead, including a child.

The al-Hol refugee camp houses 60,000 people. While most of its inhabitants are displaced Syrians, it also contains a prison that holds 10,000 foreign nationals with alleged ties to the Islamic State. The Kurdish-led Syrian Democratic Forces (SDF) guard the prison and run the refugee center.

The latest attack lasted for three hours and left four dead. Among the dead was a child and an Islamic State fighter.

Violence is not new to the camp, which is primarily populated by women and children. In 2020, the UN reported 700 people had died in al-Hol or the nearby Roj camp. Many of the deaths occurred during clashes between IS and the US-backed SDF. Half of the deaths were children, and some were caused by a lack of food and medical care.

The SDF has demanded for years that governments repatriate their citizens, but European countries have resisted. Human Rights Watch says this has created a state of indefinite and arbitrary detention for the 10,000 prisoners.

Residents of the camp report “contaminated water, overflowing latrines, shortages of fresh food and diapers, tents leaking or catching fire, rampant disease, insufficient medical care, and almost no schooling for children or counseling for a severely traumatized population,” according to HRW.