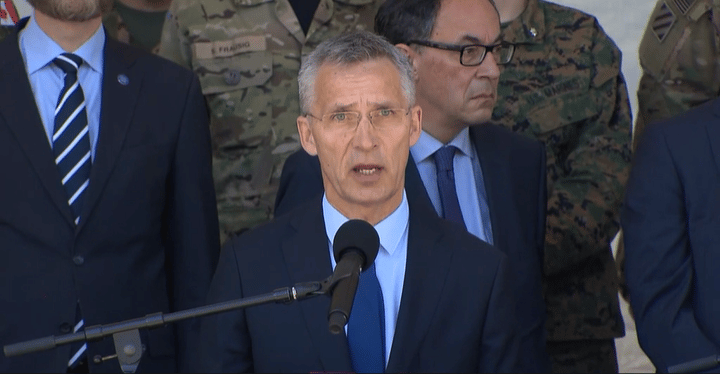 NATO Secretary General Jens Stoltenberg has attended a ceremony in Latvia to welcome a new NATO battlegroup. via Dvids

NATO is preparing a military build-up along its Eastern flank, according to the civilian head of the alliance, Secretary-General Jens Stoltenberg. The deployment will consist of four new battlegroups deployed to Hungary, Bulgaria, Slovakia, and Romania.

Battlegroups typically are made up of 1,000-1,500 soldiers. The trans-Atlantic alliance currently has similar deployments in Estonia, Latvia, Lithuania, and Poland. Stoltenberg described the new security situation in Eastern Europe, “Along with our existing forces in the Baltic countries and Poland, this means that we will have eight multinational NATO battlegroups all along the eastern flank, from the Baltic to the Black Sea.” The alliance also has 140 warships at sea and 130 aircraft on high alert.

The Secretary-General said the Russian invasion had created a “new normal.” Stoltenberg has used the covid-era saying several times since the invasion of Ukraine to justify the aggressive NATO stance.

The US currently has over 100,000 troops deployed to Europe and NATO has 40,000 multinational soldiers under its command. While most of the focus has been on ground forces, the aircraft carrier USS Truman has been increasingly active. Politico reports, “Since the invasion almost a month ago, these jets have flown more than 75 patrol missions across NATO’s eastern flank up to the Ukraine border, from the Truman.”

Secretary of the Navy Carlos Del Toro noted that Truman’s current role could allow it to be used as a weapon for another nation.

“The role of Truman, with other allies, is to deter Russians from further aggression and to be on constant standby for orders that might be given from our president or from other leaders around the world for the protection of Ukraine and the people of Ukraine.”

With the increasing tenuous security situation in Eastern Europe, Western states continue to make evidenceless warnings that Russia is plotting a chemical weapons attack as a false flag. While no Western official has yet said their countries would go to war if weapons of mass destruction were used, Stoltenberg did say, “any use of chemical weapons would totally change the nature of the conflict, and it would be a blatant violation of international law and have far-reaching consequences.”