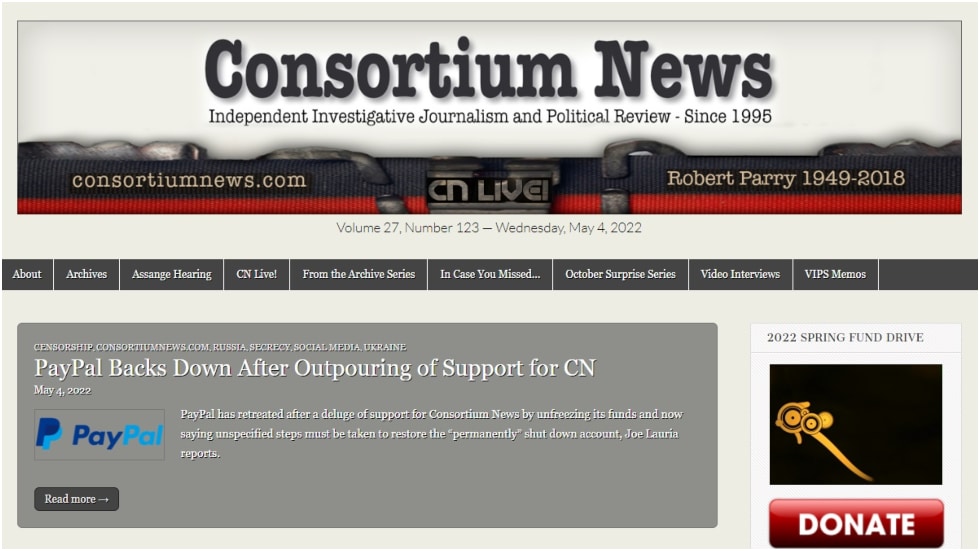 Consortium News editor-in-chief Joe Lauria announced the about-face on Wednesday, stating that the site’s $9,348 balance was made “eligible for withdrawal” late on Tuesday night, some 48 hours after PayPal froze the outlet’s account and funds over unspecified violations of its terms of service.

While the payment platform initially said the ban would be “permanent,” Lauria noted that may no longer be the case, as PayPal is now asking the site to “take steps” to restore its account. There’s just one problem: it has “failed to specify what those steps are,” and “still hasn’t identified what violations were committed to bring the ban in the first place,” leaving the site’s owners at a loss as to how to proceed.

PayPal had previously threatened to hold Consortium’s money for up to six months as it investigated the alleged ToS violations – an entirely opaque process – and even stated it may simply keep the cash as “damages” if such violations were confirmed.

It remains unclear why the platform seized the funds to begin with, and it has issued only generic notices to Consortium regarding “activity … that’s inconsistent with our User Agreement.” Lauria, however, argued the decision may have been motivated by the site’s reporting on the conflict in Ukraine, as it “is not in line with the dominant narrative that is being increasingly enforced” by social media sites and other tech firms.

“If true, PayPal was allegedly seeking to limit Consortium News’ free speech by depriving it of one of its main vehicles for funding,” he added.

The ban on Consortium was imposed the same day the reader-supported website launched its spring fundraiser. Fortunately for the outlet, the move appears to have brought the ‘Streisand effect’ into full force, as Lauria said the site received “a flood of donations” soon after its funds were frozen. The incident also garnered coverage in a number of high-profile venues, including the Hill, Matt Taibbi’s Substack, DemocracyNow! and Jacobin magazine, among others.

PayPal has targeted other independent journalists and media outlets with similar seizures in recent days, including former RT America correspondent Caleb Maupin, as well as MintPress News and two of its senior staffers, Alan MacLeod and Mnar Adley.

Adley – MintPress’ founder and executive director – said PayPal had unfrozen the outlet’s money on Tuesday. Like Consortium, however, its account remains banned, and despite being told it could follow “steps” to be reinstated, Adley noted that “no steps were provided.”

PayPal took similar punitive action against WikiLeaks in 2010, suspending all payments and donations at the behest of the US State Department, which determined the org’s publication of classified material was illegal. More recently, the payment processor was taken to court in a class-action suit over arbitrary bans and placing holds on users’ money without explanation, though it’s unclear how the case will resolve.