The United States and a long list of Western allies have pledged additional arms shipments to bolster Ukraine’s war effort, including anti-aircraft missiles and tank-killing Javelins. Fierce clashes with Russian forces continue in cities from Kiev to Kharkiv, meanwhile, as local residents report civilian deaths and damage to infrastructure by Russian bombardment.

While President Joe Biden had already greenlit $200 million in “lethal aid” to Kiev in December, another $350 million weapons package was approved last week, including Stinger anti-aircraft missiles – shoulder-fired munitions with a range of around 2.5 miles – Javelin anti-tank systems, as well as small arms and ammunition.

The move marks the first time Washington has agreed to provide Stingers to Ukrainian forces, who could use them to down Russian helicopters, and follows pleas from Ukraine’s defense minister for additional anti-air weapons, suggesting they be shipped in through Poland.

Officials in Kiev have also called for more drastic military aid, including the deployment of sophisticated US Patriot missile batteries, and have even urged the West to impose a no-fly zone over Ukraine – a request quickly shot down by the US.

Though it’s unclear when the new American shipment will arrive – or by what route – the Pentagon has indicated that Russia has made no attempt to interfere, with spokesman John Kirby telling reporters on Monday that “the assistance continues to flow, and we are comfortable that it is getting into hands that need it.”

Since 2014, the United States has provided more than $2.5 billion in military aid to Ukraine.

The new US weapons package coincided with a similar move by Germany, which has agreed to send 500 Stingers of its own and another 1,000 anti-armor missiles – breaking with its long-standing policy to never send weapons into active warzones. Berlin also authorized the transfer of 400 rocket-propelled grenade launchers from the Netherlands and allowed Estonia to send nine howitzer cannons, having previously barred them from exporting German-made weapons.

US-made Stingers and Javelins have also been shipped in from Baltic states Latvia, Lithuania and Estonia, which did not face similar resistance from Washington in approving the transfers.

Other nations that have either sent or approved arms shipments include Belgium, Canada, the Czech Republic, France, Greece, Portugal, Romania, Slovakia, Slovenia and the United Kingdom, according to a NATO statement issued last Sunday.

Since then, Spain has agreed to furnish unspecified “offensive military hardware,” Finland pledged 1,500 anti-tank systems, 2,500 assault rifles, 150,000 rounds of ammunition and 70,000 combat ration packages, while Australia committed $50 million to arm Ukraine. Not wanting to miss out on the weapons bonanza, the tiny state of Luxembourg has also offered 100 NLAW anti-tank weapons and a few jeeps, and Sweden will send 5,000 anti-armor missiles.

In another first, the European Union declared last weekend that it would devote nearly $500 million (€450 million) in lethal aid to Ukraine. According to the Wall Street Journal, however, the bloc will not send weapons itself, but rather reimburse its 27 member states for their own deliveries.

While the EU’s foreign policy chief Josep Borell announced that the alliance would send 70 fighter jets to Ukraine over the weekend – a deal to be financed by the EU’s new aid package – member states have since reversed course and the plan was dead within a matter of days.

Poland, which has also supplied weapons, has reportedly acted as a logistics hub for deliveries, likely due to its 332-mile border with Ukraine. The presence of Russian warplanes in Ukrainian airspace makes direct flights to military depots a dangerous prospect, forcing less conspicuous methods to get the cargo to its destination.

However, it remains to be seen whether the deluge of missiles, rifles and ammunition pouring into the Ukrainian warzone will have any effect on its ability to repel Russia’s invasion, which has only escalated in recent days as Russian forces encircle the country’s capital and other urban centers.

While casualty figures have been difficult to confirm, the assault on the city has reportedly killed a number of civilians, including OSCE Special Monitor Maryna Fenina. The agency confirmed her death on Wednesday and “strongly” condemned “increased shelling in urban areas.”

Blasts also erupted in the capital of Kiev on Wednesday, while Russian soldiers continue to face resistance as they close in on the city. Moscow has begun to surround Kiev and captured some neighboring towns in recent days, though it’s unclear exactly how much progress it has made in its ultimate goal of taking the metropolis. Satellite images obtained by Reuters show a massive convoy of Russian military vehicles heading south for Kiev, said to be 40 miles long. Additional ground forces and attack helicopter units were also seen in Belarus – a close Russian ally – near the border with Ukraine.

Though a litany of Western officials and media reports have suggested Moscow hoped to capture Kiev within a matter of days and is now facing unexpected setbacks, that framing is questionable, as Russian President Vladimir Putin has previously hinted at a significantly longer timetable. In private discussions leaked by an Italian diplomat in 2014, he said it may take up to two weeks to overrun the city in the event of a war. The Kremlin insists the quote was taken out of context, but did not deny the statement. 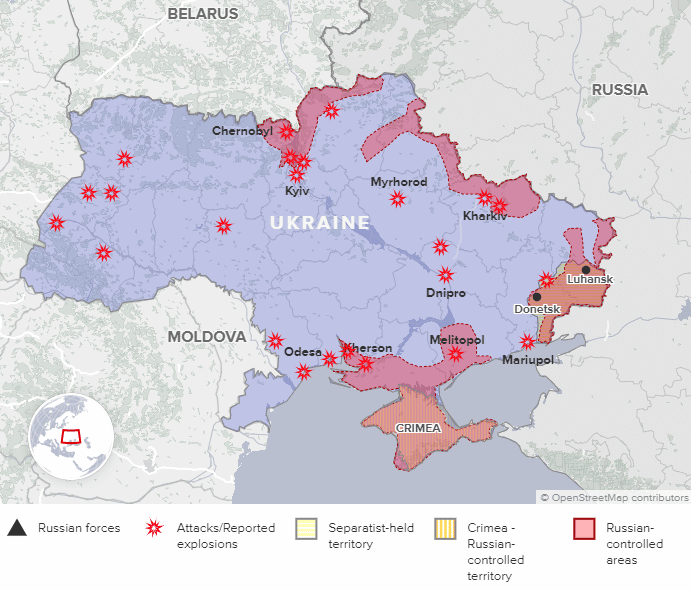 Other areas – including a number of cities north of Kiev near the border with Belarus, the Chernobyl nuclear site, as well as the southern region of Kherson – have reportedly come under Russian control, while sporadic strikes and explosions continue to be reported elsewhere in the country. According to Long War Journal editor Bill Roggio, Moscow’s forces are quickly advancing north from a jump-off point in Crimea.

Though Moscow maintains it is not targeting non-combatants, Ukrainian President Volodymyr Zelensky described the attack on Kharkiv as a “war crime,” calling Russia a “terrorist state.” Officials in Kiev allege a total of 2,000 civilian deaths throughout the Russian invasion, though that number has not been independently verified. On Tuesday, the United Nations said it confirmed 136 civilians killed and another 400 injured. It’s unclear whether the estimate accounts for fighting in the breakaway Donbass region, where Russian-speaking separatists have clashed with Ukrainian forces in recent days.

Combatant casualty estimates also vary wildly, with Ukraine claiming it’s killed 9,000 Russian soldiers so far. It has declined to offer figures for its own troops. Moscow has acknowledged nearly 500 deaths among its forces, along with around 1,500 injured, but claims to have killed more than 2,800 troops on the Ukrainian side.

Regardless of the true death toll, however, a Russian victory may be a foregone conclusion. With an army more than twice the size of Kiev’s, tanks outnumbering Ukraine’s by nearly three-to-one and a far superior air force, it appears no amount of Western military aid can change realities on the battlefield. Additional weapons shipments may simply prolong the conflict, emboldening Ukraine to continue fighting a war it’s doomed to lose as thousands more are killed in the process.