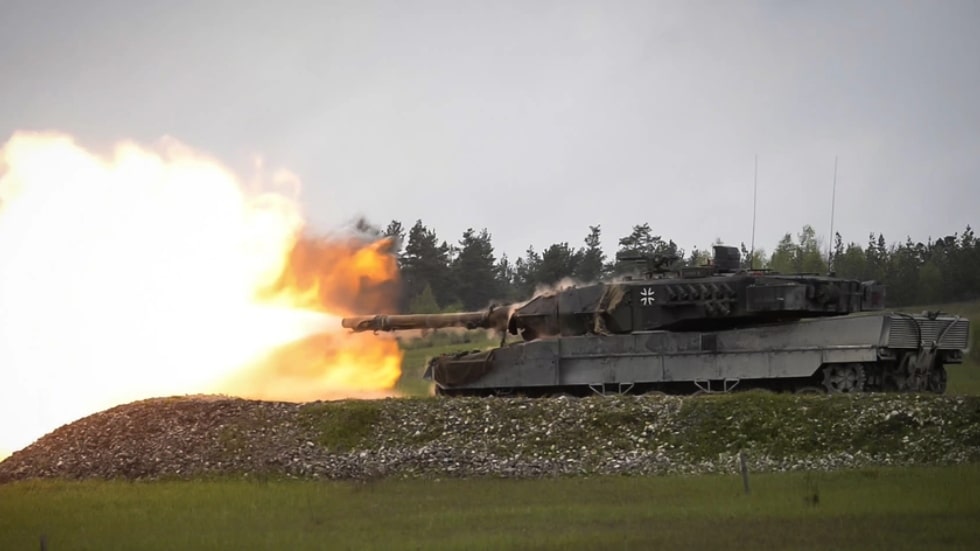 FILE PHOTO: A German Leopard 2A6 tank fires during the Strong Europe Tank Challenge at the US Army’s Grafenwoehr Training Area, Germany, May 12, 2017. (Credit: US Army / Spc. Javon Spence)

Over the weekend, other NATO members’ pressure on Berlin continued to mount while bipartisan American lawmakers have issued demands that Washington lead by example and send its own heavy tanks to Ukraine. The lawmakers highlighted the influence such a move could have in convincing other allies to send heavy tanks to Kiev “in lock step” with the American government.

After a meeting of over 50 defense chiefs last Friday, Germany remained steadfast in withholding its required approval to third nations – such as Poland – for the re-export of German-made Leopard 2 battle tanks to Kiev.

UK Foreign Minister James Cleverly implored Germany to give in and provide Kiev with the Leopard tanks on Sunday. London recently confirmed they would be sending Ukraine 14 of their Challenger 2 tanks. Concurrently, the Baltic states issued a joint call for Berlin to provide the tanks to Ukraine immediately, adding the Germans have a “special responsibility” to do so as the “leading European power.”

For the moment, Germany’s position is that they will not provide their own Leopards or green light third countries’ re-export unless the US provides similar tanks of its own. However, in an interview on Sunday, Polish Prime Minister Mateusz Morawiecki signaled that Warsaw may go around Berlin’s back with a “smaller coalition” of countries and allies willing to provide Kiev with the heavy tanks, saying “we will not passively watch Ukraine bleed to death.”

The Polish leader also took aim at German Defense Minister Boris Pistorius. “Since Minister Pistorius denies that Germany is blocking the supply of tanks to Ukraine, I would like to hear a clear declaration that Berlin supports sending them,” Morawiecki told the Polish Press Agency.

German Foreign Minister Annalena Baerbock also says that Berlin would not “stand in the way” if Poland went ahead and exported the Leopard tanks to Kiev. “For the moment the question has not been asked, but if we were asked we would not stand in the way,” she said during an interview with France’s LCI TV.

During a weekend summit in Paris between French President Emmanuel Macron and German Chancellor Olaf Scholz, the German leader reiterated his position that all weapons transfers would have to be coordinated with allies including Washington. Scholz has previously defended his reluctance regarding the tank transfers, saying he aims to prevent a direct clash between NATO and Russia that such an escalation in military aid could entail. Pistorius indicated he expects a decision soon, but it will not be made in haste.

At the Paris summit, Macron said France has not “ruled out” providing Ukraine with its Leclerc tanks. Although, he similarly warned it must not escalate the situation, must take into account the time to train Ukrainians effectively, and must not jeopardize France’s security.

During an appearance on ABC’s ‘This Week’ on Sunday, Michael McCaul, the ultra-hawkish GOP chair of the House Foreign Affairs Committee, demanded Washington transfer M1 Abrams main battle tanks to Ukraine immediately. He argued “just one” tank would be enough for Germany to send its Leopards and green light all third countries’ transfers as well. “Even saying that we’re going to put Abrams tanks in would be enough,” McCaul said.

Senator Chris Coons (D-DE) made a similar call, saying “If it requires our sending some Abrams tanks to unlock getting the Leopard tanks from Germany, from Poland, from other allies I would support that.” He added, ”I respect that our military leaders think the Abrams is too sophisticated, too expensive a platform to be as useful as the Leopards, but we need to continue to work with our close allies and move forward in lock step.”