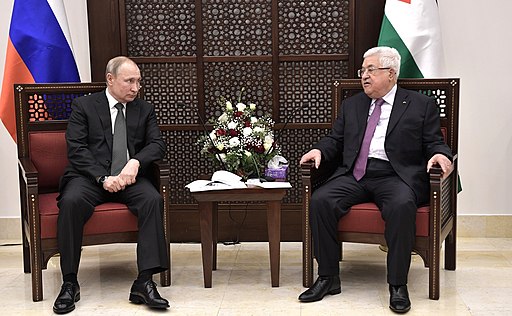 Abbas made the remarks during a public meeting with Putin in Kazakhstan on Thursday, saying “We don’t trust America and you know our position. We don’t trust it, we don’t rely on it, and under no circumstances can we accept that America is the sole party in resolving a problem.”

The Israel-Palestine conflict can only be resolved by the “Quartet” – Russia, the US, the United Nations and the European Union – Abbas added, stressing the importance of Moscow’s role: “We believe and know that Russia has a clear position on the settlement, and I am absolutely sure that it will never change. We know perfectly well that Russia stands for justice, for international law.”

Putin responded favorably and said he hopes to improve ties between Moscow and Ramallah. Russia has “a principled stance based on the fundamental resolutions of the United Nations and it remains unchanged,” he said.

Abbas is 87 years old and was last elected in 2005. While his mandate to rule expired in 2009, Tel Aviv and Ramallah have prevented new elections since. Israel continues to maintain security control and enforces its laws over all the territory of historic Palestine, though Abbas and the ‘Palestinian Authority’ (PA) government in Ramallah have some sway in the West Bank. His influence does not extend to the blockaded Gaza Strip, where the Islamist political party and militant faction Hamas has been in power since 2007.

However, Abbas’s “Quartet” plan appears to be a non-starter. In protest of the ongoing war in Ukraine, many American and European officials are refusing to attend meetings with their Russian counterparts.

The sit-down between Putin and Abbas highlights fractures in the West’s campaign to isolate the Kremlin. After Russia invaded Ukraine in February, President Joe Biden said he would ensure Putin lost his global partners. While many countries have moved to sanction Moscow, it has retained close relations with larger international players such as India and China, in addition to smaller actors like the PA.