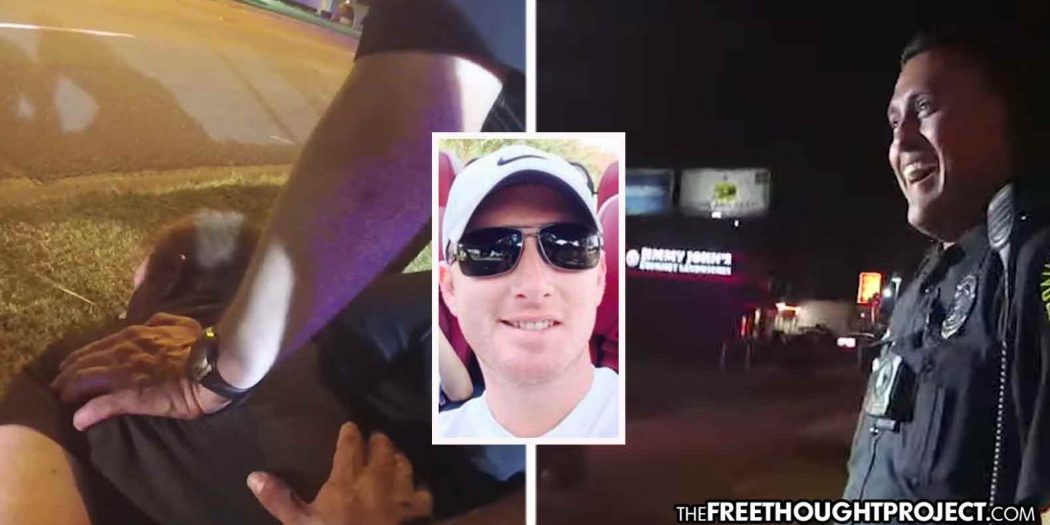 As TFTP previously reported, on the night of Aug. 10, 2016, Tony Timpa called 911 asking police to help him because he had a history of mental illness and he was off his medication. When police arrived, Timpa was already handcuffed by a private security guard and was sitting peacefully on the sidewalk, asking police to help him. Instead of receiving help, however, police would mock Timpa and joke as they squeezed the life from him. And now, we are finding out that this mocking, joking, and suffocating was apparently all part of the officers’ strategy.

This month, the details from the internal investigation were released highlighting a disturbing practice by Dallas police which includes an apparent strategy of joking and mocking mentally ill people and ignoring signs of distress.

On that fateful night, Timpa, 32, predicted his own death.

After kneeling on his back, shoving his face into the ground, and literally squeezing the air out of him for 14 minutes, Timpa could no longer hold on to life and he suffocated to death. His death would be ruled a homicide and the three officers involved would be charged.

“I had a strategy in mind, of course looking back at everything it was the completely wrong way to approach it,” one officer said during the hearing, according to a report from FOX 4.

While the officers may seem apologetic now, their “strategy” that night killed an otherwise entirely innocent man who needed their help.

As the video shows, Timpa is compliant, in handcuffs and sitting on the ground when police arrive. As officers begin to surround him though, the diagnosed schizophrenic became extremely scared. Still, he never once attempted to harm the officers, he simply begged for them to let him go.

But police did not let him go. Instead, they would force him down on the ground, face first, and squeeze the air from his body. The more Timpa squirmed in an effort to breathe, the harder the officers pushed back down on him. Timpa was then hog tied for trying to breathe.

The entire time they are killing him, the officers are cracking jokes and laughing about their actions. Even after Timpa’s body went limp and he was no longer breathing, police continued to crack jokes.

“It’s time for school. Wake up!” one officer says as Timpa lies face down in the grass, unresponsive.

Despite Timpa going completely limp and not responding to anything, the officers continue to smash down on him, all the while joking. For good measure, an EMT responder shoots Timpa up with a powerful sedative, despite Timpa being completely unconscious at the time.

“He didn’t just die down there, did he?” an officer asks.

“Did we kill him?” an officer says as another jokes, “what’s this ‘we’ stuff about?”

Moments later, the EMT tells the officers that Timpa is dead.

“Sorry, we tried,” an officer says, as he turns off his body camera.

“It’s just basic science: People can be essentially suffocated to death when they’re lying on their stomachs in a prone position and there’s weight on their backs compressing their chest and diaphragm,”  Erik Heipt, a Seattle lawyer who specializes in cases of in-custody deaths, said.

“As soon as [police] have someone handcuffed, they’ve got to know to turn them on their sides and be on the lookout for any compromised breathing issues.”

As the person struggles to breath, like Timpa, they will wiggle and shake. This is almost always interpreted by cops as “resisting,” and then even more pressure is applied, leading to an extremely dangerous and deadly scenario.

As the Dallas News reports, those three officers — Kevin Mansell, Danny Vasquez and Dustin Dillard — were indicted by a grand jury in 2017 on charges of misdemeanor deadly conduct, three months after The News published its investigation into Timpa’s death. Following two days of testimony, the grand jury’s indictment stated that the “officers engaged in reckless conduct that placed Timpa in imminent danger of serious bodily injury.”

However, thanks to a corrupt system that sets out to protect cops who kill people, in March, Dallas County District Attorney John Creuzot dismissed all the charges.

For killing Timpa and laughing about it, none of the cops received so much as a slap on the wrist.

“There were several lines of demarcation where they absolutely did not do what they’re supposed to do,” said Geoff Henley, Timpa family attorney.

“The best thing that can happen to my son right now is for these police men to lose their badge,” mom Vickie Timpa said.

Sadly, however, it appears that this will not happen and the officers’ excuse of strategically mocking a man as they squeezed the life from him was good enough to get them all off scot free.