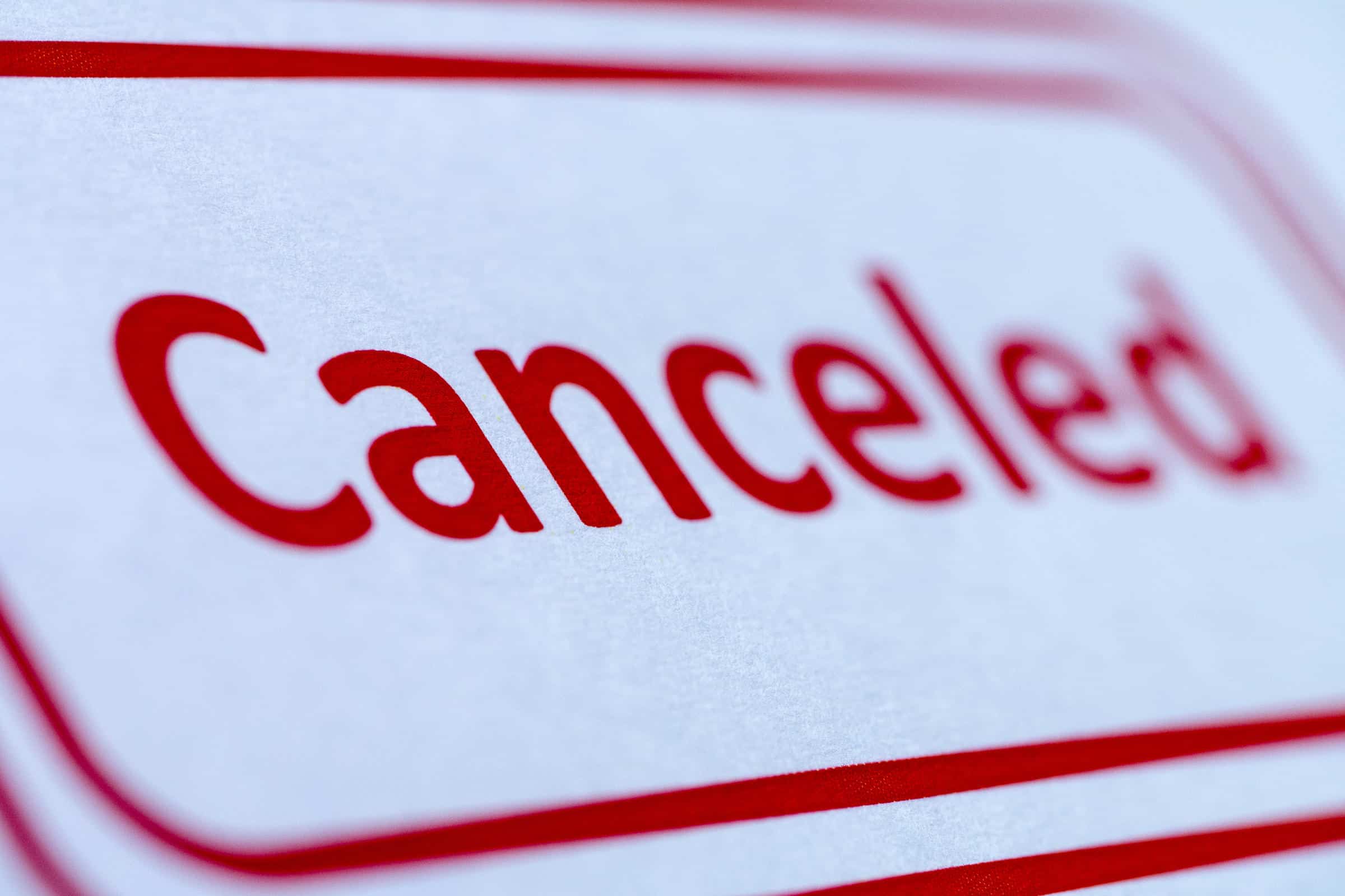 Cancel Culture only has a total of four plays in its playbook:

After that, they’re out of plays.

And Cancel Culture nearly always uses each of these plays in order.

The first play, the claim of misinformation, is usually enough to get most normies canceled on social media. The psychology behind it is fairly powerful; most people don’t like liars. Even among those who are disposed to treat inaccurate speech with other speech that’s accurate, the general sentiment of this kind of censorship is that “this is a small loss.” And among the non-thinking crowd (nearly a majority), there’s no reaction at all.

It doesn’t really matter if the normies got the information right and the Official Narrative® is factually wrong; the normies don’t have a real appeal against the rulings of Big Tech. And this accusation alone is often enough to get even substantial players on the media field canceled, such as Alex Jones.

But the accusation of “misinformation” or “fringe extremism” doesn’t work for larger players who either have their own platform (such as Gab, Reddit, 4Chan or Parler) or who are big enough to go from platform to platform and not lose much audience (such as Joe Rogan, Dave Chappelle or Jordan Peterson).

For these, additional plays must be used, but only after first attempting Play #1.

Accusations of racism or anti-Semitism is Play #2 in the playbook. This will work for most older public people, as there is typically some sort of statement or mis-statement that can at least be dishonestly applied out-of-context to suggest that the person should be canceled because they are racist. Most people don’t like bigots. So if there’s even the slightest level of credibility to a claim, this play can be effective.

As a weaker substitute, the person can be portrayed as homophobic or transphobic, and this can be effective for ordinary people on some platforms such as Twitter. But because most people still believe in basic meiosis, that someone who has a penis and testicles is a man, the latter is not as effective as a public shaming event. This has occasionally worked for second-tier stars like Disney’s Mandalorian actress and former women’s MMA fighter Gina Carano, who was canceled after her stridently pro-Trump Twitter feed that had generated charges that she was spreading misinformation. But it was the charge of transphobia that got her Disney contract canceled.

The charge of transphobia clearly doesn’t work for bigger personalities like Dave Chappelle, J. K. Rowling, Joe Rogan and Jordan Peterson. And the recent attempt to portray Joe Rogan as a racist using a video clip montage using the N-word repeatedly (created in part by Democratic Party Super PAC MeidasTouch) was not credible either, as all the clips were obviously taken out of context.

Allegations of sexual impropriety—sexual abuse or discrimination—are play #3 in the book. Nobody likes a sexual predator.

Play #3 is the tried-and-true method of smearing right-of-center Supreme Court justice nominees, from Clarence Thomas to Brett Kavanaugh. While Play #1 can occasionally tank a nominee like Robert Bork, the boring, staid life of judges typically make the first two steps difficult to employ successfully. But, since both Thomas and Kavanaugh were voted onto the Supreme Court, Play #3 obviously doesn’t always work either.

Still, this is the third play typically only after Plays #1 and #2 have been tried and failed. In the case of Clarence Thomas, the media first tried to portray him as outside of the mainstream, and then as an “Uncle Tom” closet racist. Likewise with Cavanaugh, before cancel culture dug up allegations from his girlfriends in the 1980s and cast him as a “beer bro” frat boy, the playbook of him as an extremist and possibly racist were first attempted as well.

Right now, the cockamamie cohorts of Cancel Culture are probably interviewing Joe Rogan’s former girlfriends as far back as the 1980s to see if one of them will make some sort of a claim of inappropriate behavior against him.

Sometimes allegations of sexual impropriety can be credible and still not work, as was the case of ex-President Donald Trump. The establishment didn’t like Trump because he wasn’t sufficiently on-board with the Official Narrative® in favor of eternal and omnipresent war; his campaign rhetoric to end the war in Iraq and propensity to make deals with foreign leaders didn’t sit well with the military-industrial-surveillance complex. The generally accurate portrayal of him as a font of misinformation and his gifts to cancel culture in the form of comments about Mexico “not sending their best people” weren’t enough to derail his campaign.

A known and self-admitted adulterer (he said in a presidential debate he’d only engaged in adultery “two times”), even the release of Trump’s “grab ’em by the pussy” tape didn’t kill his presidential campaign.

If allegations of sexual impropriety fail, and they can fail because the allegations are not perceived as being very serious or are not credible, or because voters don’t care, then Cancel Culture moves to Play #4.

That a person or platform is a threat to our democratic form of government—either by threatening national security (as alleged against Wikileaks founder Julian Assange or Donald Trump) or sufficiently swaying public opinion to the “wrong” opinions that democratic elections are in jeopardy is a naked appeal to government intervention.

In truth, the intelligence apparatus of the federal government is already in bed with both the legacy media and Big Tech, and has been since the advent of Operation Mockingbird after World War II.

But the nexus between the “intelligence community” and Big Tech internet companies has tightened by several orders of magnitude since September 11, 2001. The security apparatus of the federal government gave $44.7 billion to just five Big Tech companies from 2007-21: Microsoft, Amazon, Google, Facebook, and Twitter. And those contracts are increasing by several multiples every year; last year Amazon won a $10 billion contract with the NSA after winning another one for $600 million from the CIA. As such, it’s difficult to say which is the tail and which is the dog in Cancel Culture. Indeed, it’s not that far-fetched of a conspiracy theory that the federal Military-Industrial-Surveillance-Complex (MISC) would prefer to cancel exposés of its activities using Plays #1-3 rather than reveal themselves by employing the rather blunt instrument that Play #4 represents.

Former President Donald Trump was accused by U.S. intelligence officials of threatening national security for a variety of reasons, for everything from the much-publicized seeking peace with Russia to his personal debt to his voter fraud paranoia and his January 6 speech in Washington, DC which were followed by riots in the Capitol building. Newsweek magazine reported on November 12, 2020 that “’Trump’ was named in 1,200 Homeland Security threat reports before the election.”

In Canada, the full Cancel Culture Playbook has been applied by the book directly against the trucker convoy protests against vaccine mandates. Truckers were first (Play #1) accused in mid-January of being victims of “misinformation” by the official government-funded Canadian Broadcasting Company and next (Play #2) on January 29 accused of racism by the establishment/legacy press. One Canadian press organ on February 5 even (Play #3) tried to raise the specter of rapes and other violence coming from the trucker convoy, writing that “Ottawa police have declined to answer questions about how many reports of death threats, rape threats and intimidation have been made to them so far.” It’s difficult to accuse a mass movement of an entire industry of being sexual predators, however.

Thus, eventually the Canadian government was forced into deploying Play #4, declaring the trucker convoy against vaccine mandates as a national security threat. Prime Minister Justin Trudeau declared on February 14 that “We cannot and will not allow dangerous and illegal activities to continue” while invoking the national Emergencies Act powers to suppress the trucker demonstrations.

Even the U.S. Department of Homeland Security jumped on the bandwagon, suggesting copycat trucker protesters in the U.S. threatened American national security in a memorandum just days before the Superbowl.

Likewise, Play #4 was used against Facebook alternative Parler to wipe the nascent social media platform off the web in January 2021. The politically uncensored social media platform was accused of plotting to support the January 6, 2021 Capitol building riots and the Big Tech contracts supporting its infrastructure were suddenly pulled, wiping the social media company founded in part by podcaster Dan Bongino off the map for more than a month. Amazon ended its hosting services abruptly and without warning on January 10, 2021 and both Apple and Google had pulled the Parler app from their stores two days earlier. The platform went from 15-20 million users to less than 1 million, severely handicapping the platform’s influence. Of course, it’s ridiculous to accuse a platform of 15 million users with a conspiracy to overthrow the U.S. government.

That there is coordination among the Big Tech companies in silencing dissenting political voices is clear, though what’s not clear is what form that coordination takes. Perhaps more importantly, it’s unclear to what extent the federal government’s intelligence apparatus (or friendly Five Eyes governments’ intelligence agencies who coordinate with the US, are heavily funded by the U.S. government and are under no legal restrictions for operating in the U.S.) has a role in that coordination. But the interlocking contracts and common “national security” language used by both certainly merits congressional investigation and healthy citizen skepticism of Cancel Culture activities.