A Rejoinder to the Looters: It’s More Than ‘Just Property’

A Rejoinder to the Looters: It’s More Than ‘Just Property’ 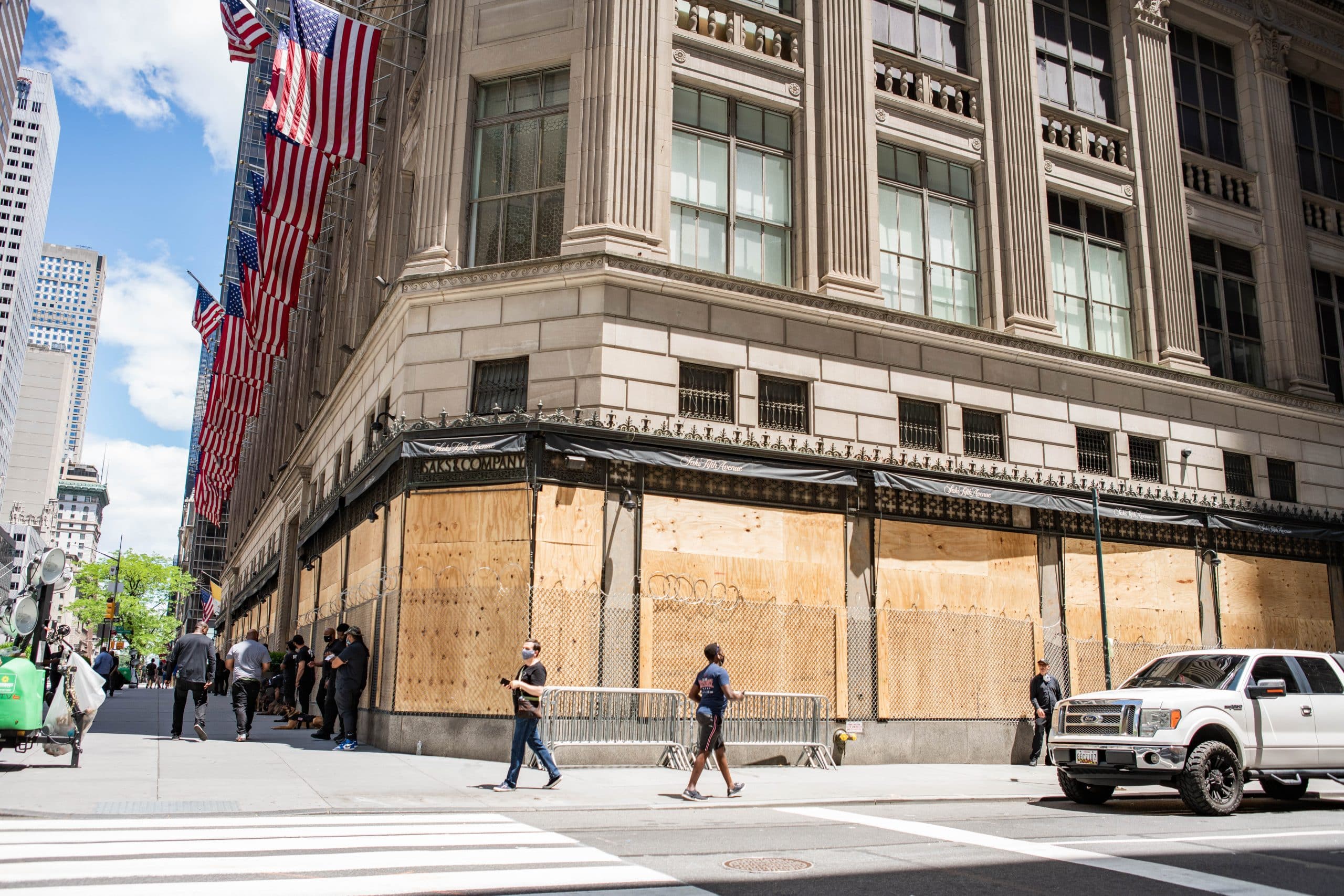 It’s now become fashionable on the left to defend looting as a means of redistributing wealth from allegedly unworthy business owners to the more deserving looters themselves.

“It’s just property!” is the refrain, with the implication being that property owners should not defend their property with coercive means—such as calling in the police or using privately owned weapons against looters.1Perhaps the most famous case of this is the “rooftop Koreans” who defended their shops with handguns, rifles, and shotguns during the 1992 Los Angeles riots.

This is the philosophy behind a recent declaration from a Black Lives Matter organizer. As the New York Post reported on August 11:

A more full apologia for looting now comes in the form of a new book titled In Defense of Looting by Vicky Osterweil, who identifies herself as “a writer, editor, and agitator based in Philadelphia.”

In an interview with National Public Radio, Osterweil states:

When I use the word looting, I mean the mass expropriation of property, mass shoplifting during a moment of upheaval or riot….

It tends to be an attack on a business, a commercial space, maybe a government building—taking those things that would otherwise be commodified and controlled and sharing them for free.

Osterweil then goes on to assert that looting is basically a poverty relief program and that it liberates the looters from having to work for a living:

It gets people what they need for free immediately, which means that they are capable of living and reproducing their lives without having to rely on jobs or a wage.

And most fundamentally of all, looting is an attack on private property itself. If only there were more looting, we could all “have things for free”:

[Looting] attacks the idea of property, and it attacks the idea that in order for someone to have a roof over their head or have a meal ticket, they have to work for a boss, in order to buy things that people just like them somewhere else in the world had to make under the same conditions. It points to the way in which that’s unjust. And the reason that the world is organized that way, obviously, is for the profit of the people who own the stores and the factories. So you get to the heart of that property relation, and demonstrate that without police and without state oppression, we can have things for free.

This sort of thing may seem convincing to those who prefer to live in the realm of pure theory. Big words like “commodify” and “oppression” might strike beginner-level dissidents as impressive. But once we start to look at the real-world details of how looting works, we quickly find that looting your local auto parts store or Nike outlet isn’t going to bring down Wall Street hedge funders any time soon. What it will do is hurt ordinary people who own businesses and work in shops that are targeted by looters. Moreover, once the smoke has cleared, we’ll find that low-income neighborhoods have suffered the most.

Specifically, there are three reasons why looting will only serve to hurt exactly the ordinary people for whom looting advocates pretend to be champions.

Retail stores provide jobs to ordinary working people, including those who lack formal education. What’s more, these jobs are often desirable jobs, offering a workplace that’s air conditioned, clean, and far safer than more dangerous jobs like driving a bus or construction. This is especially true of high-end retail shops. But selling handbags and gadgets to rich clients doesn’t make the salesperson wealthy even if it can provide a decent living.

Looters may pat themselves on the back for “liberating” these workers from their “wage slavery,” but it’s unlikely the newly unemployed workers will see things this way when they show up in the morning and find their place of work torched and ransacked.

Two: Looting Victimizes Immigrant Families and Others Who Aren’t Exactly Members of the Ruling Class

Although many news stories about looting in recent weeks have focused on the looting of high-end retail outlets in places like Chicago’s Magnificent Mile, the fact is that looting more often occurs in neighborhoods where residents are working class or low income.

And in these neighborhoods, the owners of the local shops and small businesses tend to be immigrant families and other ordinary small-time entrepreneurs who are hardly members of the Wall Street elite. According to a report on entrepreneurship in low-income areas by the Small Business Administration, self-employed workers in low-income areas are “less likely to be U.S. citizens and English speakers” relative to other areas and have less formal education. Higher proportions of the self-employed are black and Hispanic relative to other areas as well. Moreover, “The vast majority of self-employed workers in low-income areas operate a business in their area of residence.”2Maurice Kugler, Marios Michaelides, Neha Nanda, and Cassandra Agbayani, “Entrepreneurship in Low-Income Areas” (Columbia, MD: IMPAQ International, 2017), p. 21–22 These business owners tend to face hardship themselves. Part of the reason they live and work in a low-income neighborhood is because they have relatively less access to working capital and business loans than people in higher-income neighborhoods.

Lower-income neighborhoods are not entirely without advantages. Competition is often less robust in lower-income neighborhoods, as many larger firms prefer to not take on the added risk of placing their offices and stores in these areas. This leaves more room for smaller, independent firms where owners are more willing to take on the risk in exchange for lower rents and lower up-front operating costs. The downside comes from the higher potential for crime, including robberies, looting, and vandalism. But because they have few other choices, many entrepreneurs in these areas choose to take their chances. When they are successful, they bring to their neighborhoods more employment and greater access to goods and services for residents.

But it is precisely these immigrant-owned, minority-owned, and family businesses that tend to be most victimized by looters.

Naturally, at the level of the independent business, looting can be disastrous for business owners. The notion that looting is “no big deal” because businesses often have insurance is tone deaf to the point of being laughable. Most businesses in lower-income areas can barely afford the premiums necessary to cover the replacement value of their businesses—if they can afford them at all. Many businesses are underinsured. Nor is the recovery process effortless. Months after businesses were torched in Minneapolis’s riots, “Just 20% of all riot-related insurance claims have been paid so far.” Moreover, insurance premiums are higher in areas where there is high risk of crime and looting. Premiums will be even higher following the latest round of riots and looting.

This, is why businesses often tend to shut down and leave riot-affected neighborhoods after being looted. Insurance doesn’t just make a business owner’s problems go away. Looting and rioting also signal to other businesses to stay away.

Over time, this means fewer businesses, fewer employers, and more urban blight. It’s why after the 1977 blackout and looting in New York City countless businesses packed up shop and never returned. These areas remained economically depressed for decades afterward.

Put another way, looting and riots lead to “divestment” in lower-income neighborhoods.3High-risk neighborhoods are caught in a cycle of low capital investment thanks to the perceived risk. As noted in an April 2019 story by National Public Radio: “You have a cycle that kind of perpetuates that neighborhood being less friendly to business,” says Spencer Cowan, the researcher who compiled the data. “Businesses don’t get started. So employment stays depressed. The job opportunities aren’t there in the neighborhood. Businesses that are there don’t expand.”

Needless to say, looting doesn’t help the situation. And it only makes poverty worse for those who think they’re liberating themselves and others by ripping off iPhones and athletic shoes.

This goes beyond just the neighborhood level as well. The recent looting in Chicago—even the looting in posh business districts—only serves to cut citywide tax revenues:

“This downtown base of residents and business generates almost $2 billion for the City of Chicago,” [Magnificent Mile Association spokesman Adam] Skaf said. “If those types of retailers leave in the future, that leaves a huge hole in our tax base downtown and that affects the whole city.”

Those business don’t need to have locations in Chicago. There are plenty of other markets in America where looting is much more rare or even nonexistent. So, many business may simply leave, and this means less tax revenue for spending on infrastructure, public transportation, and social services. In other words, it means less spending on just the sorts of programs and amenities that defenders of looting tend to want.

No, looting stores is not something about which we just shrug our shoulders and say “Golly gee, it’s just property. No one got hurt. Lighten up!” Looting hurts lots of people: especially the poor, and especially those who do the most to bring capital, employment, and prosperity to lower-income neighborhoods.