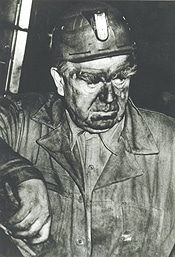 I hope you had a fun and celebratory Labor Day weekend.
I’d like to speak to you about that holiday, and why it connects to the mission of Bring Our Troops Home.
John L. Lewis was a labor organizer, and for forty years served as president of the United Mine Workers of America. An eternal hero to coal miners, his bonafides as a progressive are unimpeachable.
But just over eighty years ago he publicly broke with President Franklin Roosevelt because Lewis was a man who believed in America First more than the Democratic Party.
In a big Labor Day speech, John L. Lewis thundered:

“War has always been the device of the despairing and intellectually sterile statesman. It promises employment in the gun factories and begets enormous profits for those already rich…Above all war perpetuates in imperishable letters on the scroll of fame and history, the names of its political creators and managers.”
“Labor in America wants no war or any part of war. Labor wants the right to work and live—not the privilege of dying by gunshot or poison gas to sustain the mental errors of current statesmen.”

Lewis worked with the original America First Committee—including its Chairman Robert E. Wood, businessman and president of Sears & Roebuck—because there was a time when people knew you didn’t have to be left or right, business or labor, to oppose the War Party.
You just had to be an American.
So when our organization talks about our America First supporters, we’re not just referring to MAGA Republicans.
We’re non-partisan, open and wiling to partnering with organizations and legislators on the left and right who believe we need to bring our troops home from these endless, unconstitutional wars.
Another part of Labor Day reminds me of our remarkable National Guardsmen.
These are citizen-soldiers, who when they’re not training in arms or volunteering their service to our country, are holding down full-time jobs in the private sector.
National Guardsmen are our mechanics, our nurses, our school teachers, our small business owners, our trucker drivers, our accountants, our salesmen, our firefighters, and so much more.
They’re not just the backbone of the United States military—in many ways they’re the backbone of our economy too.
So if you agree with me that the National Guard is an integral part of our country, then help me protect them and pass “Defend the Guard” legislation. This bill will prevent their deployment into active combat without a declaration of war by Congress, as required by Article I, Section 8 of the U.S. Constitution.
It’ll help our soldiers, and our workers.