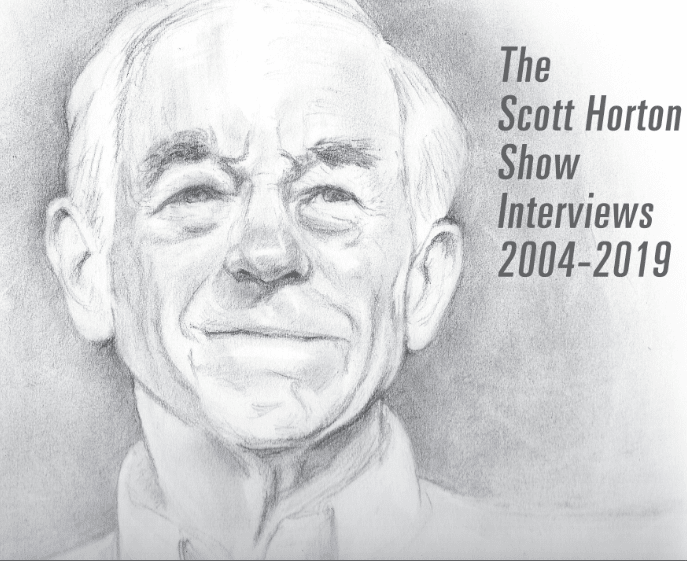 When Ron Paul left Congress after failing to win the GOP nomination in 2012, it
seemed as though the movement that formed around his two historic presidential
campaigns would continue to thrive. After all, his son Rand Paul was a popular first-term
senator and an early frontrunner for 2016. But then came Donald Trump, whose rise
realigned American politics, ending not only the Bush and Clinton dynasties, but what
the New York Times called “the Libertarian Moment.”

It’s now common in the liberty movement to hear about the need to re-create such a
moment; it’s nearly as common to hear some of those same people ignore, discount, or
even denigrate the man without whom it wouldn’t have happened. The publication of
The Great Ron Paul, a collection of 38 radio and podcast interviews between Paul and
Scott Horton, is a timely—and inspirational—reminder of just how much a man of
character can accomplish by staying on message.

Ranging from 2004—about the time most of America was starting to realize that Iraq
War II might have been a huge mistake—up to 2019 and the battle over who is in
charge of foreign policy in the post-Russiagate Trump White House, this series of talks
also ends up being an insightful as-it-happens survey of the 21st century metastasis of
the American Empire by two of its most principled critics—whose direst warnings
against interventionism all turned out to be correct.

The seeds of the Ron Paul Revolution were planted a decade before his first
presidential run, when in 1997 Paul began a second stint as congressman from District
14 in South Texas. He had a simple, two-pronged message: that the Clinton-era
economic boom was actually a Federal Reserve-fueled bubble about to burst and that
decades of foreign intervention would eventually result in blowback against the United
States and the American people. Paul was often speaking to an empty House chamber,
but a few hundred people across the country were watching, thanks to C-SPAN.
Among these viewers was Scott Horton, a skater and former cab driver from Austin,
Texas, whose passion for debunking government lies had been sparked by the
shameful massacre of the Branch Davidians at their Waco compound in 1993 by federal
law enforcement bureaucrats eager for a high-profile operation that would attract more
funding. Horton became a self-described “evangelist” for Ron Paul’s message of peace
and freedom, handing out photocopies of Paul’s speeches to his passengers as he
asked them, “Did you know there was one good congressman?” Soon, Horton created
an interview show on KAOS Radio 95.9 FM, a pirate radio station in Austin.

A few of the early interviews with Paul, Horton now admits, were done under false
pretenses; he lied about doing the shows live on KAOS to Paul’s congressional chief of
staff Jeff Diest, who was wary about his boss knowingly defying the FCC.
From the start, the two have an easy rapport, with Paul graciously—and
repeatedly—sidestepping Horton’s effusive praise to stick to his calm, but
uncompromising, analysis of issues—analysis that displays an understanding of
economics and history far surpassing all but a handful of his political contemporaries.
Whenever Horton asks Paul for his take on the Bushes, the Clintons, McCain, Gingrich,
Pelosi, and—of course—Giuliani, Paul is ever the amiable contrarian, deftly refuting
their policies—in real time, not hindsight—while eschewing the insults and lies that his
opponents have always used against him.

More economic and foreign policy crises are coming, and when they do, many
Americans will be ready to listen to explanations and solutions. We’re more likely to
connect with them if we emulate the approach Paul consistently displays throughout
these interviews.