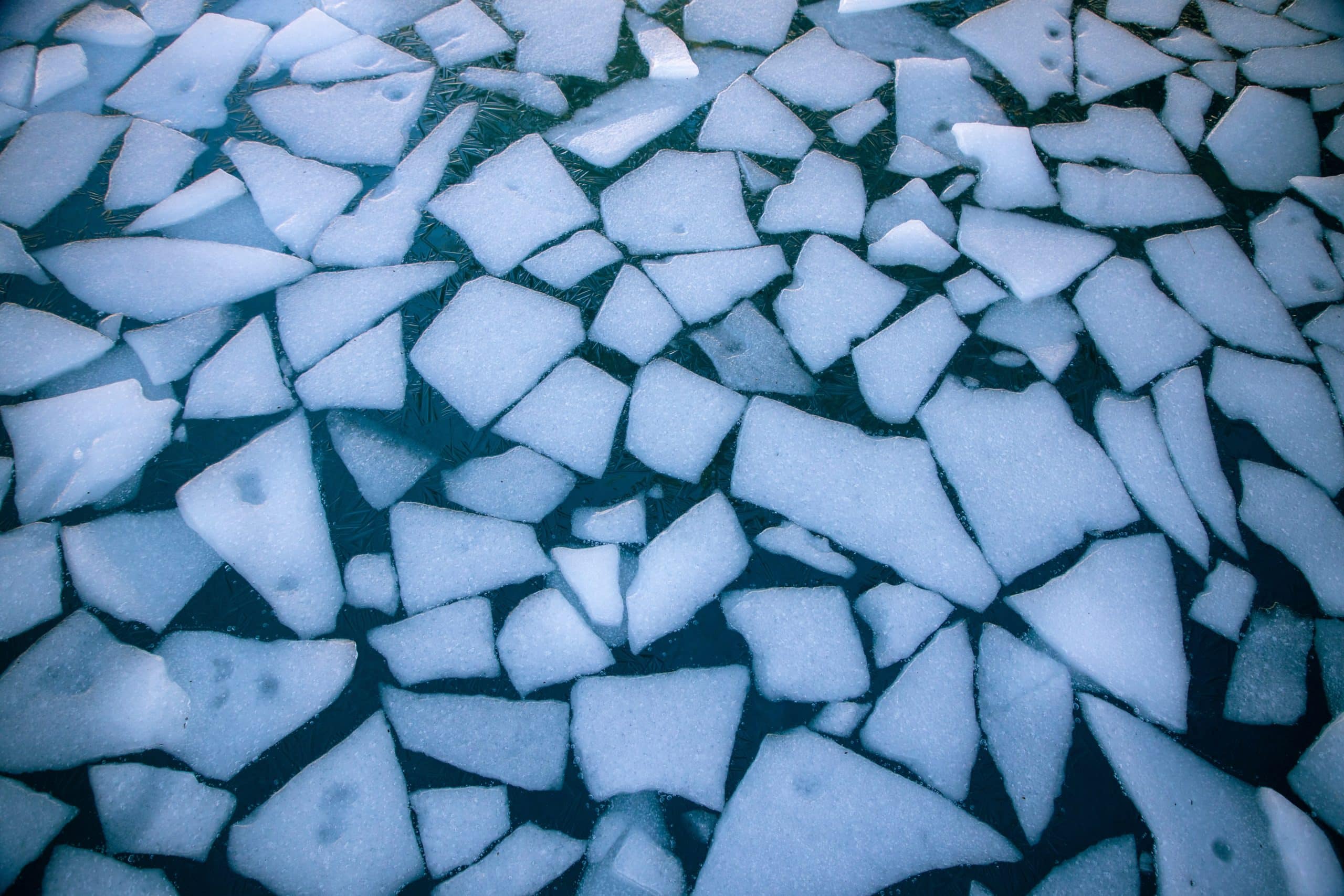 In 2009, the BBC ran a reporting piece on the Arctic featuring the esteemed polar scientist Peter Wadhams of Cambridge University. The Catlin Arctic Survey, a project set out to answer vital scientific questions about sea ice in the Arctic, had just returned with its findings. Its central purpose had been to gather evidence on how long a warming planet could sustain an all-year ice cover at its northern pole: How long did the Arctic ice cover have left?

The results, said Wadhams, who has studied the Arctic since the 1970s, were terrifying. The survey supported the “new consensus view that the rapid melting of sea ice will turn this frozen landscape into an open ocean within twenty years” and that “much of that decrease will be happening within ten years.” The old view in the scientific literature and publications by the Intergovernmental Panel on Climate Change (IPCC) was that an extreme event like an ice-free Arctic could happen around mid-century at the earliest.

Three years later, Wadhams predicted that an ice-free Arctic would occur in 2015 or 2016, describing the climate events of these northern latitudes as a “global disaster.” The scientific article that prompted the infamous disaster-peddling journalist Nafeez Ahmed to run a full Q&A with Wadhams in The Guardian suggested the Arctic ice would melt “within 30 years,” but somewhere between scientific publication and newspaper reporting, the prediction got shifted by an order of magnitude.

In 2016, The Guardian ran another weekend long-form piece with Wadhams as his fascinating and comprehensive book, A Farewell to Ice: A Report From the Arctic, was hitting the shelves. Although Wadhams repeats his warnings of an imminent ice-free Arctic in the book, he is more balanced, suggesting that the prediction game of when an ice-free Arctic may or may not happen takes away from the more important point:

“The dismal failure of most models to reproduce the present state of the Arctic ice in summer. The debate over exactly when the September Arctic will become ice-free has distracted attention from the more important issue, which is how fast, and in what manner, the Arctic sea ice will retreat at all seasons of the year.”

While long term trends show a decline in Arctic ice, Wadhams’ stark predictions didn’t come true—in 2016 or in any other year since. In fact, the September lows of the Arctic sea ice extent in 2021, per NASA data, was one-sixth above what it was when Wadhams uttered these fateful words in 2016.

The interview had Wadhams double down on his remarks in response to a direct question about his previous predictions. He said that the historical trend was clear and that by 2016 or 2017, the “central Arctic will be ice-free. You will be able to cross over the north pole by ship.” Five years later, that still wasn’t true, according to the maps published by the National Snow and Ice Data Center at the University of Colorado, Boulder.

Yet, he’s not alone in making these stark predictions about Arctic ice. In 2007, Professor Wiesław Masłowski of the Naval Post Graduate School in Monterey, California, projected that the Arctic would be ice-free by 2013, based on state-of-the-art modeling and 50 years’ worth of data. In an Annual Review of Earth and Planetary Sciences article in 2012, Masłowski and three coauthors updated this figure to “2016 ±3 years.” Those years came and went, yet still there was no ice-free Arctic.

More recently, Harvard professor James Anderson said in 2018 that the chance of any permanent ice left in the Arctic by 2022 was “essentially zero.” When the observations come in later this year, we’ll find out, but it’s not looking promising for Anderson’s prediction.

My purpose above is not to take pot-shots at failed predictions or minimize the threat of climate change: the future is difficult to predict, and the Earth’s climate system is ridiculously complicated. The danger that these climate scientists give voice to is real and important; the reality is just nowhere near as bad as they say. Wadhams’ polar research has been invaluable to what we know about this remote part of the planet: the ice cover is gradually shrinking, as is the thickness of that ice. As it shrinks, it reflects less of the sun’s incoming rays, exposes the ocean below it to much more heating, and threatens to release methane plumes long stored at the ocean floor.

However, even some of the brightest scientists get carried away by their own research and overestimate its importance. When thrust before journalists on the hunt for juicy quotes, it’s no secret that the state of the scientific literature—let alone their own research findings—might get a bit polished. Exaggerated.

While a more resilient Arctic is bad for the predictions of Wadhams, Masłowski, and Anderson, it’s actually good news for a climate area drenched in pessimism. In January 2022, sea ice in the Arctic was at its largest extent in over a decade—but strangely, the NASA press release reported it under the heading “NASA Finds 2022 Arctic Winter Sea Ice 10th-lowest on Record.”

Contrary to what we might learn from casually browsing the newspaper headlines, we will likely continue to have ice in the Arctic for a long time.

What failed past predictions by reputable scientists and institutions tell us is that we don’t understand these complex systems as well as we would like to. That means that the next prediction, perhaps of an even more dire nature, ought to be taken with a whole jar of salt.

The world has an unfathomable and mind-boggling amount of ice. Something like one-eighth of all the Earth’s land is covered by it—some of which, like the ice sheets at Greenland and Antarctica, are kilometers thick.

There’s a strange piece of selection going on in media reporting about the climate, where, because the climate is chaotic and highly volatile, there is always a “record” or “anomaly” observed in some domain, somewhere on the planet. If it’s not the Brazilian forest fires or global deforestation that I have written about before, it’s the disaster we don’t hear about or heat records in Siberia. Somebody, somewhere, has a climate story.

As if to prove my point: as I’m writing this, news broke about a New-York-sized ice shelf in east Antarctica that crashed into the sea after “a freakish warm spell.” The National Geographic coverage featured the following quote: “[the Conger ice shelf] had been slowly disintegrating for years but then collapsed quickly, as winds rose and temperatures spiked.” Buried two-thirds down the AP press release was the confession that both of the scientists interviewed for this article thought that the recent weather pattern in Antarctica “is probably just a random weather event and not a sign of climate change.” Predictably, the news coverage was anything but as balanced as those scientists’ statements.

Usually, the climate stories about ice in Antarctica that are reported in the alarm-prone Western media are events on the opposite side of the continent—calvings or changes in the Pine Island Glacier or Thwaites Glacier (the latter more often called “the Doomsday Glacier”). News of a big and terrible event occurred, not where the scientists had said it would and feared it would, but where few eyes were looking.

Events like those create the impression of a constant stream of emergencies followed by even worse emergencies—even though many climate indicators are hovering around long-term trends and the planet is more livable than ever before.

The task of scientists is to critically investigate their findings and report them accurately—not exaggerate them, or pick the most extreme interpretations, or peddle outrageous predictions to the public. As physicist Steven Koonin observes in his recent book on climate science, Unsettled: What Climate Science Tells Us, What It Doesn’t, and Why It Matters, “it is the height of hubris for a scientist even to consider deliberately misinforming policy discussions in service of what they believe to be ethical.”

This article was originally featured at Human Progress and is republished with permission.

Joakim Book is a freelance writer, editor and researcher on all things money and financial markets. To learn more about Joakim, visit www.joakimbook.com.