Back to Iraq: US Prepares Mini-Surge Into Region

Back to Iraq: US Prepares Mini-Surge Into Region 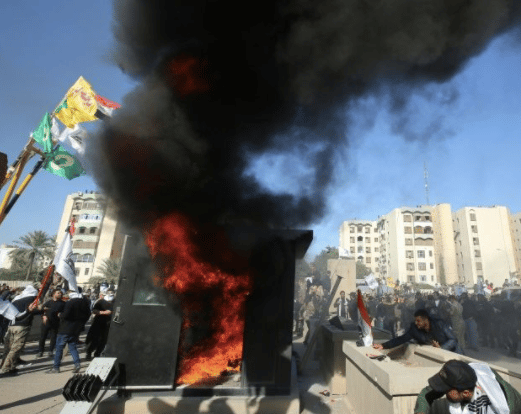 The US went into this past week with about 5,000 ground troops in Iraq, and with Pentagon officials suggesting that deployment is more or less permanent. It was meant to be one of those lazy, open-ended overseas deployments, nominally to bring stability.

Then on Friday an Iraqi base got hit with rockets, and on Sunday, US warplanes started attacking bases in Iraq and Syria belonging to a militia that is part of the Iraqi government. After multiple Iraq Wars since 2003, the US presence is looking complicated again.

Tuesday saw protests against the US Embassy, with the US rushing Marines and Apache helicopters to the site to try to defend the embassy. That’s just the first step.

Defense Secretary Mark Esper says another 750 paratroopers will be deployed to Kuwait immediately. Another 4,000 paratroopers are being told to prepare for deployment in the days ahead.

Despite President Trump saying he intends to hold Iran fully accountable for everything that happens, he’s also saying he expects Iraq to protect the US Embassy.

On top of that, Secretary of State Mike Pompeo is speaking with Iraq’s PM Adil Abdul-Mahdi, who actually resigned weeks ago in the wake of an Iranian consulate getting burned to the ground. At the time, the US was encouraging the protesters. Now, Abdul-Mahdi is facing the US Embassy in peril, and the US accusing Iran of being behind it.

Iraq isn’t the most stable place on earth at this point. Protests are common, they have no real premier, and have been struggling to avoid being the stage of a US-Iran proxy war. With Iraqi MPs talking of expelling the US, the deployments to Kuwait suggest the US intends to go back into Iraq, one way or another.