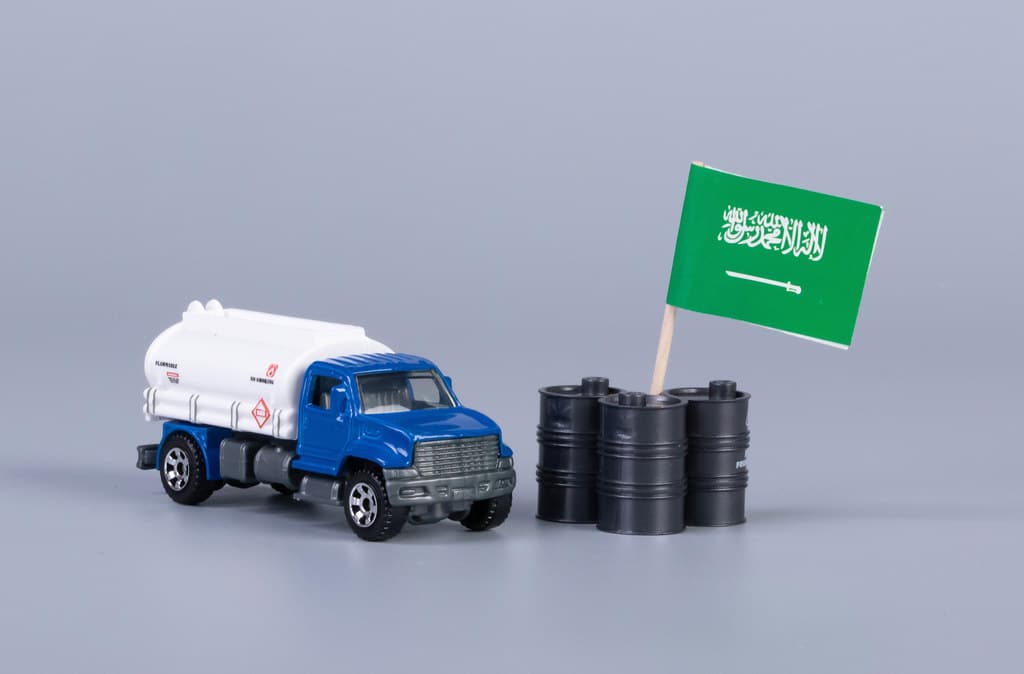 Why don’t you talk about something that matters?” President Biden replied to a journalist asking about why he fist-bumped Saudi dictator Mohammed bin Salman (MBS) during his “begging for barrels” trip to the Middle East in July. Biden hoped the Saudis would rescue his presidency by pumping more oil in order to lower American gasoline prices and prevent the demolition of the Democratic Party in the mid-term elections.

On the eve of Biden’s “begging for barrels” tour, federal data confirmed the wreckage of his economic policies. The inflation rate soared to 9.1%, much worse than forecast. Biden has decimated the purchasing power of the dollar as real wages for Americans declined for the 15th straight month. Biden traveled as a desperate man whose own political party is facing a horrendous pummeling in November.

Prior to Biden’s Saudi trip, a top White House official justified forcing Americans to continue paying high gas prices to prop up Biden’s plan for “the liberal World Order.” This was part of the “Putin’s Price Hike” refrain and an attempt to make people feel patriotic when they get skewered at the gas pump. But the PR gesture failed miserably—except perhaps for the coastal elites, who are unaware what their chauffeurs pay to fill the tank.

Biden assured Americans before leaving that “fundamental freedoms are always on the agenda when I travel abroad.” Unfortunately, “fundamental freedoms” have never been on Biden’s domestic agenda. The Saudi regime preserved decorum by refraining from mass public beheadings of dissidents and scofflaws during Biden’s visit.

Last year, the Biden administration concluded that MBS personally approved the brutal murder of Washington Post columnist Jamal Khashoggi in 2018. Khashoggi’s corpse was dismembered with a bonesaw after he was lured to the Saudi embassy in Turkey. That atrocity helped spur Biden to label Saudi Arabia a “pariah” during the 2020 presidential campaign. But such rhetoric was a relic of the era of low gasoline prices.

Biden’s Kow-Tow to the Saudis

Prior to Biden’s visit, the biggest fear for many pundits and human rights activists was that Biden would pose in a “grip and grin” photo with the Saudi dictator. Washington Post publisher Fred Ryan worried that such a picture would signal “to autocrats everywhere that you can quite literally get away with murdering a journalist.” Ryan also fretted that Biden was squandering “our moral authority.” Dude, that train left the station long ago.

After Biden fist-bumped MBS, the Washington Post publisher howled even louder: “The fist bump between President Biden and Mohammed bin Salman was worse than a handshake—it was shameful. It projected a level of intimacy and comfort that delivers to MBS the unwarranted redemption he has been desperately seeking.”

The story spiraled downwards amidst mutual accusations of lying. In talking to the American media, Biden claimed he accused MBS of murdering the Post columnist. The Saudi foreign minister went on Fox News and said that didn’t happen. Biden responded by saying that the Saudi minister wasn’t telling the truth, but the Saudi minister did say that Biden “mentioned that the United States is committed to human rights.” So all’s well that ends well.

Biden was correct that journalists should focus on “something that matters” more. Except that the other issues were even more damning for Biden.

Since 2015, the U.S. government has sent $50+ billion in weaponry to the Saudis, which was then used in brutal bombing campaigns that killed and injured 18,000 Yemeni civilians, according to the United Nations. Responding to widespread outrage at atrocities, Biden announced in February 2021 that he was ending U.S. government support for Saudi “offensive operations” in Yemen, including “relevant arms sales.”

But Biden’s definition of “relevant” had more loopholes than a congressional ethics reform bill. A recent Government Accountability Office (GAO) report exposed the farcical nature of Biden’s arms halt. The United States continues to approve “defensive” weapons for the Saudis—but federal officials “have no specific definitions of ‘offensive’ and ‘defensive.’” It gets worse. Biden’s Pentagon policies prohibit the “the misuse” of U.S. weapons transfers. But GAO noted, “DOD and State officials both said that use that causes civilian harm would not necessarily constitute ‘misuse.’”

GAO reported that the State Department’s “assessment is based on the INTENDED use of the weapons, which may or may not match the actual use. State and DOD lack a comprehensive picture of how U.S. assistance has actually been used in the war in Yemen.” The U.S. government spends scores of billions of dollars a year on intelligence agencies but cannot be bothered to even compile a list of the carnage the Saudis inflict on Yemeni women and children with U.S. weapons. The U.S. government has not even bothered to investigate high-profile incidents of Yemeni carnage. The United Nations concluded “that U.S.-origin defense articles may have been used in strikes that caused substantial civilian harm in a manner that violated international humanitarian law,” GAO reported.

The American media completely ignored what should be the biggest barrier to U.S.-Saudi relations. When you look at the New York skyline and no longer see the World Trade Center twin towers, thank the Saudi regime. Saudi government officials directly aided and protected some of the 9/11 hijackers (15 of the 19 were Saudis) after they entered the United States. Biden is the fourth U.S. president in a row to continue covering up key information on the Saudi government role on 9/11.

Anyone who wonders why the vast majority of Americans distrust Washington should consider the government’s continuing systematic deceit over the 9/11 attacks. As the Bush administration rushed to exploit 9/11 to justify invading Iraq, a joint House-Senate congressional investigation in 2002–2003 found extensive evidence of Saudi government officials’ assistance to the hijackers. The Bush administration succeeded in suppressing the key 28 pages of that congressional report on the Saudi role on 9/11.

The coverup was propelled by the 9/11 Commission, which kowtowed shamelessly to the Bush White House. 9/11 Commission member John Lehman “was struck by the determination of the Bush White House to try to hide any evidence of the relationship between the Saudis and al-Qaeda,” noted Philip Shenon, author of The Commission: The Uncensored History of the 9/11 Investigation. If the 9/11 Commission had quoted the 2002 FBI memo stating that there was “incontrovertible evidence that there is support for these [9/11 hijacker] terrorists within the Saudi Government,” Bush might have been seriously damaged. But the commissioners didn’t go looking under any rocks they were told to ignore.

Former FBI Special Agent Stephen Moore, who led one of the key FBI teams investigating 9/11, stated in a 2017 affidavit: “Based on evidence we gathered during the course of our investigation, I concluded that diplomatic and intelligence personnel of the Kingdom of Saudi Arabia knowingly provided material support to the two 9/11
hijackers and facilitated the 9/11 plot. My colleagues in our investigation shared that conclusion.” Former Senate intelligence committee chairman Bob Graham said in 2018 that the FBI has “just thrown the biggest blanket they can find over everything that has to do with the Saudi role in 9/11,” as Brian McGlinchey reported. Former FBI agent Danny Gonzalez told CBS News that disclosing FBI documents on the case would reveal more links between Saudi government officials and the hijackers.

But Biden and the media ignored the Saudi role in terrorist attacks that killed thousands of Americans. Pundits may have preferred to gas-bag about the fist bump because it did not require any reading or thinking. The AFP News Agency swooned: “It took less than 24 hours in Saudi Arabia for US President Joe Biden to tarnish an image he has long cultivated: that of a fierce defender of human rights.”

Such rhetoric set the media baseline for coverage—even though the premise was absurd, if not disgraceful. Biden has a long record of groveling to foreign regimes with sordid human rights records. Biden’s boasting of string pulling to get an anticorruption prosecutor fired in Ukraine should have permanently obliterated any pretenses of his decency beyond the U.S. territorial limits. But the media expunged Biden’s sordid past in the rush to get him elected in 2020.

The media completely ignored the other atrocities that the U.S. government is helping spawn in the Middle East. The Obama administration commenced arming Muslim terrorist groups in 2013 to try to topple the Assad regime. The program was a catastrophe from the start: CIA-backed Syrian rebels ended up fighting Pentagon-backed rebels. Much of the U.S. aid ended up in the hands of terrorist groups, some of whom were allied with Al Qaeda. Providing material support to terrorist organizations is a federal crime except when the weapons are sent by U.S. government agencies. Federal appeals courts used absurd rationales to prohibit disclosures on the CIA’s weapons-for-Syrian-terrorists program. The U.S. military effectively invaded Syria and is now occupying a huge swath of that nation. But it is a nonissue for Biden and the American media.

The media also ignored the underlying absurdity of Biden begging the Saudis for more oil. Biden kowtowed abroad at the same time he scorns our nation’s heartland. As Rep. Yvette Herrell (R-NM) asked, “Why is Joe Biden going to Saudi Arabia for oil while suppressing the American energy industry?” Sixty-eight members of Congress co-signed her letter to Biden demanding an answer to that question. Herrell complained that “Biden and the radicals in his administration seem hellbent on destroying American oil and gas.” Perhaps Biden prefers pleading for favors from foreign tyrants to unleashing his fellow citizens to deliver bounties in the marketplace. After Biden in June accused U.S. oil companies of making excessive profits, the American Petroleum Institute issued a list of 10 steps Biden could take to reduce supply disruptions, including ending obstruction of permitting on natural-gas projects, lifting development restrictions on federal lands and waters, and ending Trump-era steel tariffs.

Biden’s Saudi trip should have driven the final wooden stake into his pious pirouetting on the world stage. But the scorekeepers—the media elite and their establishment allies—thrive on the illusion that the U.S. government is the world’s savior and policeman. This is the dogma that is spurring the Biden administration to seek to prolong the conflict between Russia and Ukraine. Biden is letting the bloodshed continue as long as he can profit by portraying himself as a savior of democracy for supporting the corrupt regime in Kiev.