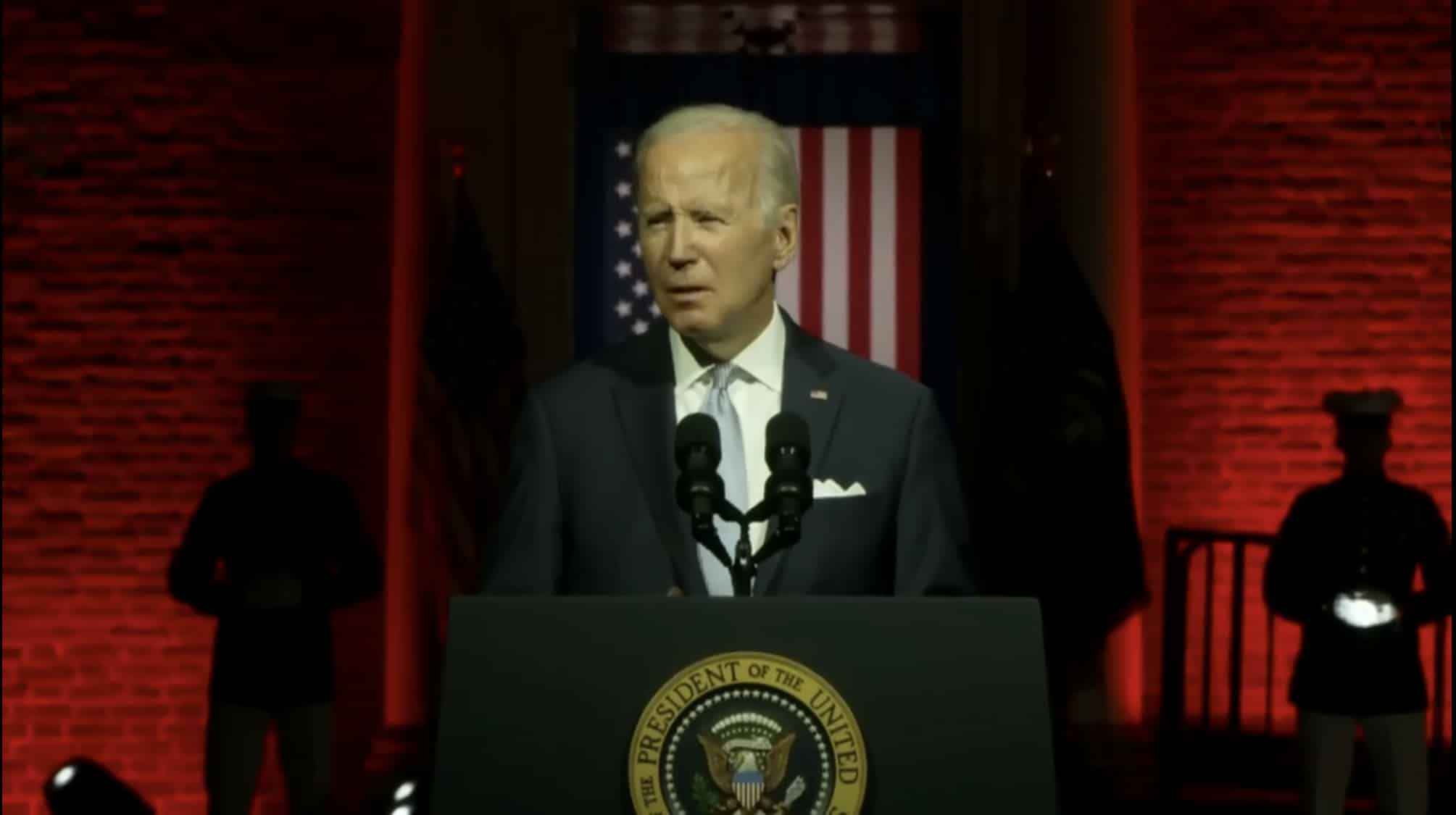 President Joe Biden believes that hysterical denunciations of extremism will save the Democratic Party in the upcoming congressional midterms. Despite media portrayals of Biden as a good-natured moderate, the president has relied on sweeping castigations of opposition throughout his political career. Worse, Biden’s rhetoric on extremism could signal an attack on any limits on presidential power.

Last Thursday in Philadelphia, Joe Biden overheated in a primetime speech with a backdrop seemingly inspired by a mix of the movie “V for Vendetta” and Nazi filmmaker Leni Riefenstahl. The harsh red atmospherics perfectly complemented Biden’s attempt to portray ex-president Donald Trump and his Republican supporters as the Anti-Christ waiting to crucify American democracy.

Biden declared that, “Trump and the MAGA Republicans represent an extremism that threatens the very foundations of our republic.” But he didn’t confess to the audience that he considered almost half of all Americans to be “extremists.”

A few hours before Biden’s speech, White House Press Secretary Karine Jean-Pierre asserted, “When you are not with what majority of Americans are, then you know, that is extreme. That is an extreme way of thinking.” Is this wacko definition of extremism designed to vilify anyone who doubts Biden will save America’s soul?

To vanquish extremism, Biden called for everyone to “unite behind the single purpose of defending our democracy.” In other words, everyone must support Joe Biden or democracy will be destroyed. But Biden’s version of democracy is a parody of the Constitution. He believes that thanks to 43,000 votes in three swing states, he has unlimited power to dictate how Americans must live.

In his Philadelphia speech, Biden invoked the “Rule of Law” five times, notwithstanding his twenty months of dictatorial decrees. Law Professor Jonathan Turley observed, “President Biden has arguably the worst record of losses in [federal court] the first two years of any recent presidential administration.” The only limits on his power that Biden recognizes come from his pollsters, not from the Constitution.

Since Biden took office, his appointees have exploited “extremism” to sanctify stretching his power. Last year, the Biden administration revealed that guys who can’t get laid may be terrorist threats due to “involuntary celibate–violent extremism.” The White House did not disclose whether self-abuse was the latest terrorist warning sign. A senior administration official (speaking anonymously to the media) said the new program would encourage people: “If you see something, say something.” The Biden report stressed that federal law enforcement agencies “play a critical role in responding to reports of criminal and otherwise concerning activity.”

“Otherwise concerning activity”? This is the same standard that turned prior anti-terrorist efforts into farces.

Refusing to get injected with an experimental vaccine is another badge of extremism according to Biden scorekeepers. On August 13, 2021 the Department of Homeland Security issued a terrorist alert, warning that “anti-government/anti-authority violent extremists could exploit…potential re-establishment of public health restrictions across the United States as a rationale to conduct attacks.” Anyone who loudly objects to being locked back under house arrest thus became the moral equivalent of the Taliban, or maybe Hezbollah.

The following month, Biden gave a primetime address which dictated a COVID vaccine mandate for more than 80 million private employees and also portrayed the unvaccinated as public enemies. By the time Biden codified his decree in a November Federal Register notice, the efficacy of the COVID vaccine had fallen to less than 50%. But Biden apparently believed he was entitled to force people to get injected no matter how badly Pfizer shots failed. In January, the Supreme Court struck down Biden’s vax mandate for private companies.

The Biden administration won’t let the Constitution impede its war on extremism. As part of this new priority, the Department of Homeland Security (DHS) may exploit a “legal work-around” to spy on and potentially entrap Americans who are “perpetuating the ‘narratives’ of concern,” CNN reported last year. But federal informant programs routinely degenerate into “dollars for collars” schemes that reward scoundrels for fabricating crimes that destroy the lives of innocent Americans. The DHS plan would “allow the department to circumvent [constitutional and legal] limits” on surveillance of private citizens and groups. Federal agencies are prohibited from targeting individuals solely for First Amendment-protected speech and activities. But federal hirelings would be under no such restraint. Private informants could create false identities that would be problematic if done by federal agents.

One DHS official bewailed to CNN, “Domestic violent extremists are really adaptive and innovative. We see them…couching their language so they don’t trigger any kind of red flag on any platforms.” DHS officials have apparently decided that certain groups of people are guilty regardless of what they say (“couching their language”). The targets will likely include gun owners who distrust the politicians who vow to seize their guns. Any excesses by the new informants will be excused because they are for the sacred cause of saving democracy (or at least crippling Biden’s opposition).

Anyone who vigorously opposes federal power can get tarred as an extremist. On the day that Joe Biden was inaugurated, former CIA chief John Brennan announced on television that federal intelligence agencies “are moving in laser-like fashion to try to uncover as much as they can about” extremists, libertarians, and other malefactors. Federal entrapment operations may have already harvested a heap of hapless individuals who could be indicted when politically convenient.

The definition of “extremism” is a flag of convenience for the political establishment. The definition of “extremism” has forever been in flux. The only consistent element in definitions of extremism is that politicians always win. A 2013 Pentagon training manual explained, “All nations have an ideology, something in which they believe. When a political ideology falls outside the norms of a society, it is known as extremism.” In other words, beliefs that differ from prevailing or approved opinions are “extremist” by definition. And who gets to say what is acceptable to believe? The same politicians and government agencies and their media allies whose power is buttressed by prevailing opinions.

“Extremism” is even more vaporous than “terrorism.” With terrorism, at least the individual or group is purportedly committing (or planning to commit) some violent act. An extremist, on the other hand, is someone with a bad attitude who might do something unpleasant in the future. Crackdowns on potential extremists provide the perfect tool to demonize dissent.

Will the Biden crackdown on extremists end as ignominiously as Nixon’s crackdown almost 50 years earlier? Nixon White House aide Tom Charles Huston explained that the FBI’s COINTELPRO program continually stretched its target list “from the kid with a bomb to the kid with a picket sign, and from the kid with the picket sign to the kid with the bumper sticker of the opposing candidate. And you just keep going down the line.” At some point, surveillance became more intent on spurring fear than on gathering information. FBI agents were encouraged to conduct interviews with anti-war protesters to “enhance the paranoia endemic in these circles and further serve to get the point across that there is an FBI agent behind every mailbox,” as a 1970 FBI memo noted. Is the Biden castigation campaign an attempt to make its opponents fear that the feds are tracking their every email and website click?

The Biden administration could be expanding the federal “Enemies List” faster than any time since the 1970s. Will Biden’s war on extremism succeed in radically narrowing the boundaries of respectable American political thought? Permitting politicians to blacklist any ideas they disapprove won’t “restore faith in democracy.” What if government is the most dangerous extremist of them all?