Blaming Libertarianism for Every ‘Societal Woe’

Blaming Libertarianism for Every ‘Societal Woe’ 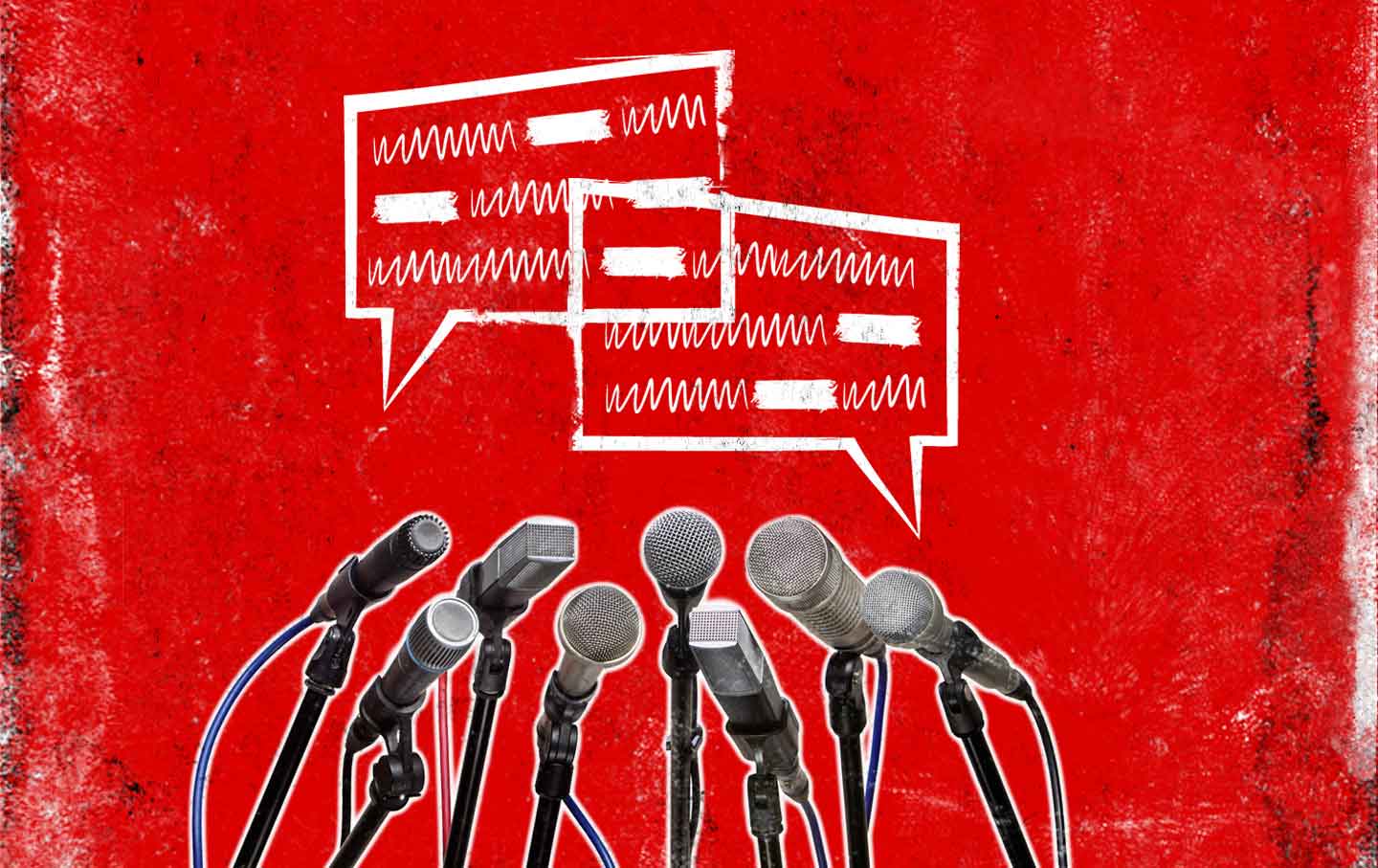 Normally, a random post on Twitter doesn’t deserve an answer in the form of an article, but in an era where the libertarian ideology (that of non-aggression and strict property rights), which is much closer to the ideas of liberty expounded by the founders of America than modern “Conservatism” could ever hope to be, it is probably warranted. Whether it be Tucker Carlson blaming Austrian Economics and libertarianism for betraying the “American worker” on his highly rated nightly entertainment program, or a Tweet from a “free-speech-maximalist” social media platform attempting to hold libertarianism liable for “drag queen story hour,” the opioid epidemic or mass migration, it’s about time to point out that there are a couple huge elephants in the room these people seem to be ignoring. 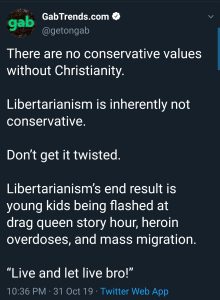 Mind you, one should not be shocked by their ignorance. These parties have obviously bought into the hysteria that those in power always use as a rudder to guide the gullible and emotional to and fro. Most people nowadays are like modern doctors when they come across something they can’t quite diagnose; they concentrate on the symptoms rather than the root cause. Examining the Tweet at hand, we see not only this issue, but just plain ignorance.

The Purple, Blinking Elephant in the Room

Normally, an article such as this one should proceed in tearing apart the subject of its irritation by starting at the beginning, but since the author’s main vexations are held until the end we shall proceed there.

Whether you’re talking about big “L,” or small ‘l’ libertarianism, they both can agree that the smaller the government is, the more liberty the individual has. The author seems to be working under the assumption that small, or no government, would cause young kids to be flashed at “drag queen story hour,” heroin overdoses and mass migration.

The United States currently has the largest, most powerful government in the history of mankind. They are 23 trillion dollars in debt not counting unfunded liabilities. They have military bases in over 80 countries. They lead all nations in incarcerating their citizens which has been fueled by an almost 50-year, immoral “War on Drugs.” They extort upward of 50% of their citizens incomes when you take into consideration all taxes and fees.

If the United States was ever inspired by libertarian ideals, those days were gone over 100 years ago. The author’s main criticisms; young kids being flashed at “drag queen story hour,” heroin overdoses and mass migration, are all occurring under a government that you would be hard-pressed to find a shred of libertarian ideology in. “Drag Queen Story Hour” is happening in government schools and libraries. Libertarians would have public schools and libraries abolished in favor of private alternatives. The opioid epidemic has been proven by libertarian academics to be a direct result of government regulation. Dr Mark Thornton has done the best work on this and has appeared on this author’s podcast driving that point home. Mass migration is being caused by foreign policy, interventionism, and if it is some grand conspiracy, it is being orchestrated by politicians and people of influence using the monopolistic power of government to accomplish their goals. Most libertarians would see government abolished and free market solutions put in place such as making all property private thus solving the “migration” issue and turning it into a matter of trespassing.

The inevitable objections now will start. The most obvious being that these problems would become more rampant in a society without a central power (having already proven that all of this is occurring with, either the seal of approval of the biggest government in history, or with their apathetic attitude towards it, this forces the author to argue for what, even more government?). Sure, that argument can be made but it is all based on conjecture as Robert Higgs likes to point out. It’s all theoretical. What can be proven empirically, is all of the horrors that the author is bemoaning are happening under the most powerful State on the planet contradicting any point trying to be made in the Tweet regarding libertarianism.

Maybe the author believes that if only they were in charge, they would have all the answers. Many socialists like to point at certain countries and say, “that wasn’t real socialism,” which translated usually means they believe themselves to be smarter, and more “moral” than those who’ve gone before, and if only they had been the shot-caller, utopia would’ve been achieved. Those who deny horseshoe theory deny reality.

Now we can go back to the start.

Starting off your criticism of libertarianism by invoking “Conservative values” without explaining exactly what they are is sophistry. The claim is made that these values are non-existent without Christianity but there the writer falls on their face again. What are Christian values? One could go to ten different denominational churches of Christianity and get different answers to the question of what their cultural values are. The author has in their mind what Conservatism and Christianity must be, and to separate the two is anathema. “To hell with the Conservative atheist! He is no ally of mine!”

They proceed with the statement that “libertarianism is inherently not conservative.” Since they don’t define their terms; how can one even begin to take this statement apart? Anyone who would make an attempt would be working under assumptions to which the author can simply retort, “that’s not what I meant!”

I do champion the statement though. Libertarianism is not Conservative. Murray Rothbard makes that abundantly clear:

Conservatism is a dying remnant of the ancien régime of the preindustrial era, and, as such, it has no future. In its contemporary American form, the recent Conservative Revival embodied the death throes of an ineluctably moribund, Fundamentalist, rural, small-town, white Anglo-Saxon America.

Conservatism is another form of collectivism that cannot find solutions outside of it. In other words, the individual may be spoken of, and even championed, but to stray from the thought process contained within puts you outside of it. It has no room for individualism as can clearly be seen in the Tweet this article references (leaving aside the three topics the author highlights as they can be considered legitimate concerns to individuals as well).

Addressing their finale of “live and let live bro” is tiresome. I don’t know any libertarian who would echo that statement unless it was qualified with “as long as you aren’t damaging someone else’s person or property.” It is actually a perfect example of a “straw man fallacy” and warrants no further discussion.

Anyone who spends considerable time on the “political” side of social media should be able to recognize that most statements like the one in the referenced Tweet are being posted by persons who are either ignorant, or dishonest. Recently, it appears that more people are intent on putting out false narratives about people or ideologies they disagree with in the moment. It is a fact that there have been a number of attacks recently on the libertarian ideology by those who will say in one breath that it is useless and outdated, while in the next blame it for the cause celebre. One may be inclined to believe they’re feeling threatened and lashing out. This should be seen as inspiration moving forward.