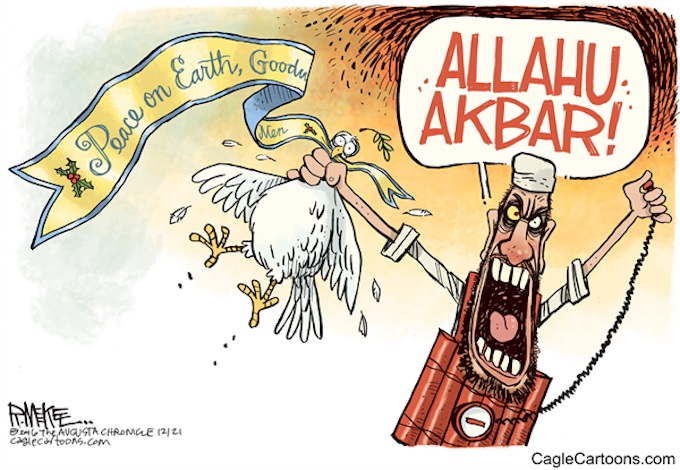 December is here and you know what that means.

It’s time for the dinosaur media and the U.S. government to conduct their annual ‘let’s scare the hell out of the American people during the holidays’ psychological operations.

The State does not refer to it in exactly that way and is it not yet official policy. But it has come to be every bit as American as apple pie.

It has been more than sixteen years since the attacks of September 11, 2001. And in those years, the establishment news and the regime have never missed a season.

As Americans celebrate the holidays and transition into 2018, they will no doubt be subjected to the highest quality fear mongering money can buy.

In fact, the macabre journalism has already begun.

Center right radio host Buck Sexton, formerly of the CIA, recently penned a particularly horrifying piece for The Hill titled ‘As ISIS prepares for holiday terror, we must prepare to smoke them out‘.

The article is boiling over with fear mongering and reads as if it was written circa 2002, not 2017.

“An ominous poster of Santa Claus standing next to a box of dynamite in Times Square appeared in a pro-ISIS forum earlier this week with the headline “we meet at Christmas in New York soon.” A picture of a masked jihadi, with a rifle in the front seat of a car driving toward the Vatican marked with the banner “Christmas Blood so wait” appeared a few days before that. Christmas markets in Germany and Queen Elizabeth of England have also been the targets of Islamic State threats over the past month.”

“It is symbolism, however, that would be the biggest driver of ISIS’s holiday terror. Thanksgiving, Christmas, and other festivities celebrated at year’s end are a special time for America and Europe. For the fanatics of ISIS, there is no better time to inflict their misery and hatred upon us. Our holiday joy is an affront to their nihilistic sadism.”

“They not only hate us for our freedom, but for the displays of happiness, prosperity, and unity from now until 2018.”

The worst part of the ‘forever war’ industry is the mass murder of civilians.

Since 1991, the U.S. has been responsible for the deaths of millions of Iraqis alone.

There is an ample supply of well meaning people in this country who continue to be suckered into sacrificing their progeny’s future and liberty at the altar of imperialism and the military-industrial complex.

For decades, U.S. bombings and occupations have been creating terrorists via the blowback phenomenon. And often the U.S. finds itself and its allies directly, albeit covertly, supporting terrorists as well.

Barrack Obama’s administration armed and supported Jihadis who were members of or were loyal to al Qaeda (AQ) during the Libyan regime change operation.

Beginning in 2011, the CIA along with America’s Sunni allies Saudi Arabia, Qatar, and Turkey established elaborate trafficking networks that supplied arms to AQ and its allies in their war against Bashar al-Assad’s regime. A Defense Intelligence Agency document from 2012 revealed the intelligence community was aware that this would lead to the creation of an ‘Islamic State’ in Syria and Iraq. It further indicated that this was the aforementioned allies’ intention.

There are Israeli fingerprints on the Syrian war as well. Correspondence from 2012 between then Secretary of State Hillary Clinton and James Rubin, the former diplomat and journalist, detail the Israeli government’s role in agitating Obama toward his ultimate Syrian strategy. This correspondence is documented in Clinton’s WikiLeaks email archive. Benjamin Netanyahu’s government essentially blackmailed the former president, threatening him with the much larger war that would necessarily result, absent a ‘more aggressive’ U.S. Syrian policy, from an Israeli ‘surprise attack on Iran’s nuclear facilities’. Jason Ditz reported at AntiWar.com, former Israeli Defense Minister Moshe Ya’alon said in January 2016 that “ ‘he’d much rather see ISIS rule all of Syria‘, and consequently be directly on Israel’s border, than have the pro-Iran government remain in power.” In June 2016, as ISIS was losing increasingly more ground to Syrian forces, Israel’s military intelligence chief, Major General Herzi Halevy said that ‘the Israeli military is looking at direct support for ISIS as a matter of policy, and not just rhetoric’. Israeli support and medical aid for al Nusra (AQ) and other rebel factions in Syria has been reported extensively.

Obama also supported and armed AQ in the Arabian Peninsula via his support for the Saudis’ Yemen genocide. The U.S. and U.K. backed Saudi war on Yemen has led to what is now the world’s worst humanitarian crisis.

Donald Trump continues to escalate Obama’s Yemen policy. And although he officially ended CIA support for al Nusra and their allies in Syria, it has since been reported that the Pentagon has assumed that responsibility.

In the Trump era, as with all other options, also on the table is collusion with ISIS. The BBC and Phil Giraldi recently reported on how the U.S., with its British and Kurdish allies, helped ISIS fighters escape death at the hands of Syrian and Russian forces in Raqqa.

“In the event, trucks and busses were assembled on October 14th, formed into a convoy, and were loaded with more than 4,000 fighters and families. More than 100 ISIS-owned vehicles also were allowed to leave and there were ten trucks filled with weapons. The convoy stretched for more than four miles and film footage shows trucks pulling trailers filled with militants brandishing their weapons. The fighters were not allowed to display flags or banners but they were not forced to disarm and in fact loaded all the vehicles with as many weapons as they could carry, so much so that one truck broke its axle from the weight. The BBC reported that “This wasn’t so much an evacuation – it was the exodus of so-called Islamic State.”

Also from the article, “The evacuees made it safely to ISIS controlled territory and presumably will be ready, willing and able to fight again.”

The State and its military continually prove they are not fit to represent the American people. There is no American master plan. It is frequently the case that our disastrous policies in the Middle East were originally hatched up by neoconservatives working for the Likud, Israel, and Gulf oil money. On the other hand, the American people take the blame for enormities committed by their ‘leaders’ because democracy is a way for power holders to evade their actions’ consequences. After all, the people voted for politicians who supported this war or that policy. True enough, but Americans are besieged day in and day out by a trans-media propaganda network that would have made George Orwell blush.

Who knows how much more the Bill O’Reillys, Joy Reids, Rush Limbaughs, and Sean Hannitys of the world know than their duped fans. The State prefers to have deluded buffoons lying to the American people, giving them their (fake) news. It’s easier that way. Too much internal cynicism amongst propagandists leads to hubris and carelessness. See CNN.

Blowback, while horrible and inexcusable, is understandable. People whose lands are indiscriminately rained upon year after year with billions of dollars’ worth of cluster bombs, white phosphorous, Hellfire missiles, depleted uranium, etc., who live under endless foreign occupations, and suffer under Western backed Jihadi tyrannies can identify the responsible parties. Western democracies largely make up the coalitions dropping the bombs that kill their loved ones. Conversely, the victims suffer under despotisms. They assume, mistakenly, that these democracies represent the will of their people. However, these democracies are controlled by powerful special interests who do not give a damn about the will of the people. Whether it is a truck driving through a crowd of people in the West or an airstrike on an Iraqi family’s home, innocents are almost always the victims. Americans have been convinced by the regime and it’s kept media that the terrorism’s raison d’être is to literally terrorize innocent people and scare them. However, the definition of terrorism is: the unlawful use of violence and intimidation, especially against civilians, in the pursuit of political aims.

These people want the West to stop killing their children, colonizing, and occupying their land. The radicals amongst them who commit these comparatively small and sporadic acts of terrorism give us a vivid idea of what it is like to have a mother, sister, brother, father, or friend murdered randomly and without reason.

In America, one is more likely to be assassinated by a bee or die in their own bed than to be killed by a terrorist. The empire and their media are playing a sick game.

War is a racket. In addition to privacy and due process, the ‘war on terror’ business has cost the American people $5.6 trillion, will cost $8 trillion in interest payments, and since 2011 has cost between $1.2 and $1.3 trillion every year.

Happy Holidays and fear not. Absent fear, the empire’s favorite racket would collapse. You can see why terrorizing us is such a priority.