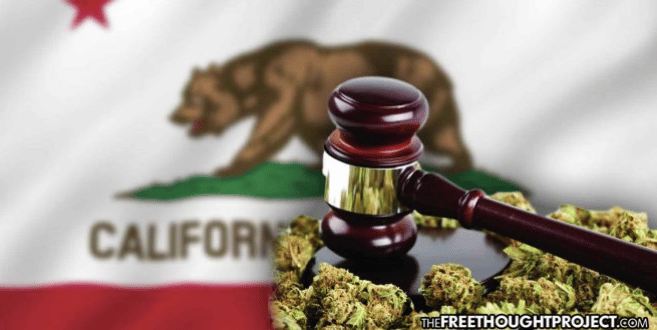 California — It’s been two years since California began licensing businesses to sell legal marijuana. Unfortunately, however, the legal scene is far outmatched by the black market and the state government is 100% responsible. Instead of reacting to the negative effects of state involvement in the cannabis market, the government of California has doubled down and will vastly increase the burden on legal operations which is certain to create more crime, damage the environment further, and stoke unemployment and business closures.

And the state couldn’t care less.

“Essentially, the state is raising our taxes $3 on every $100,” said Eric Miramon, co-owner of All About Wellness in Sacramento.

Miramon told KCRA his pot shop pays a whopping $120,000 a month in combined state and city taxes — and those fees are going up.

Cannabis wholesalers were already paying outrageous excise fees of 60%. But this year, those fees went up to 80%. Cultivation fees are also going through the roof. The effects of extorting the legal cannabis industry for more and more money are devastating both for crime and the environment.

“Increasing the taxes over and over a little bit every month, this is pushing people further and further into the black market,” Miramon said.

The effects of officials steadily stealing more and more from the market via higher taxes and more regulations have been staggering. In fact, despite bringing in $3.1 billion in licensed pot sales — becoming the largest market in the world in 2019 — it is estimated that over 80% of cannabis sales still take place in the black market.

That is nearly $9 billion going to people who are willing to break the law. While many of the folks on the black market are good people who simply wish to conduct business outside the burdensome economy taxed into oblivion by the state, others are ruthless killers and members of the cartel.

El Dorado County sheriff’s Deputy Brian Ishmael was one of the victims of this policy. A private resident who was allowing the cartel to illegally grow weed on his property called police in October after the cartel refused to pay him all his money. When Ishmael responded to the call, cartel members harvesting the last of their weed, shot and killed him.

Ishmael is one of many victims in this drug war that’s been created and maintained by prohibition and government regulation.

The criminal element created by government regulation is only one facet of their careless and idiotic addiction to red tape. Black market cannabis cultivation is also wreaking havoc on the environment as well.

“These are federal lands, and they are being systematically destroyed through clear-cutting, stream diversion, chemicals and pesticides,” said U.S. Atty. McGregor Scott at a news conference in November after a massive illegal grow operation was found in the remote areas of California’s Sierra Nevada mountains. “It’s a vitally important issue.”

Despite knowing what’s causing the problem, officials continue to move in the opposite direction by doubling down on regulations and taxes —pushing more people into the black market — ensuring years of future destruction and violence.

Many of the black market cannabis grow operations are run by careless individuals who are polluting streams with pesticides and fertilizers, while siphoning huge amounts of water from the same streams for irrigation.  Small waterways are a precious resource in this region, and the historic drought has already lowered stream levels dramatically.

Rat poison, industrial pesticides, and banned chemicals are used to prevent pests from getting at cannabis crops.  These highly toxic pesticides lay waste to insect populations, sicken or kill predators, and are having a significant impact on the Pacific fisher.  The Pacific fisher is a cat-sized mammal that feeds on rats and fish, and is close to becoming endangered.

As the LA Times points out, experts say carbofuran is so hazardous that a teaspoon will kill a full-grown bear. Partly because of illegal grow sites, traces of carbofuran’s deadly chemical composition have been detected in streams and rivers, and found in animals — living and dead — including threatened species such as the Pacific fisher.

Streams in Northern California are being sucked dry by illegal cannabis farms. While reducing valuable aquatic habitat in these areas, it is especially harmful to salmon and steelhead, which depend on these streams in their young stage. Clear-cutting forests for cultivation, creating sediment runoff from road-building, and fertilizer/pesticide runoff further threaten the aquatic life.

Experts estimate that cannabis cultivation in California uses nearly twice as much water as wine grape cultivation, or almost 3 billion liters per kilometer in one season. When done in a sustainable manner, it is manageable, but the current black market process is anything but.

“It’s a web of death that happens,” said Mourad Gabriel, co-director of the Integral Ecology Research Center, a natural-resource nonprofit that has spearheaded the effort to track the environmental impacts of trespass grow sites, and also leads the charge to clean them up.

On top of the increase in crime and the environmental destruction are the effects on the economy and the devastation of small businesses and jobs.

Before these tax and regulation increases rolled out on the 1st of January, legal cannabis growers were already reeling from current regulation and taxation. In November, Flow Kana, which bills itself as “California’s No. 1 selling cannabis flower brand,” cut a fifth of its entire workforce. Now, it will likely get much worse.

“It was one of the toughest decisions that I’ve ever had to make,” CEO Mikey Steinmetz said in November. As the SacBee reports, Flow Kana isn’t the only cannabis company forced to make cuts. In recent weeks, companies like Eaze and Weedmaps have also laid off part of their workforce. Other companies have laid off employees or completely shuddered their businesses forever.

“It almost feels like an epidemic of companies of similar size going through similar processes,” Steinmetz said.

All these companies know what’s causing it too but they are powerless to stop the behemoth that is the greed of the state of California.

“The combination of overtaxation, overly-complicated regulations, and lack of dispensaries due to local moratoriums have created significant imbalance in the biggest legal marijuana industry in the world,” Steinmetz said in a letter to the state at the end of 2019, requesting they roll back some of the red tape.

Sadly, however, it appears his letter fell on deaf ears and the state has made moves to ensure the downfall of legal weed in California—crime, the economy, and the environment be damned.