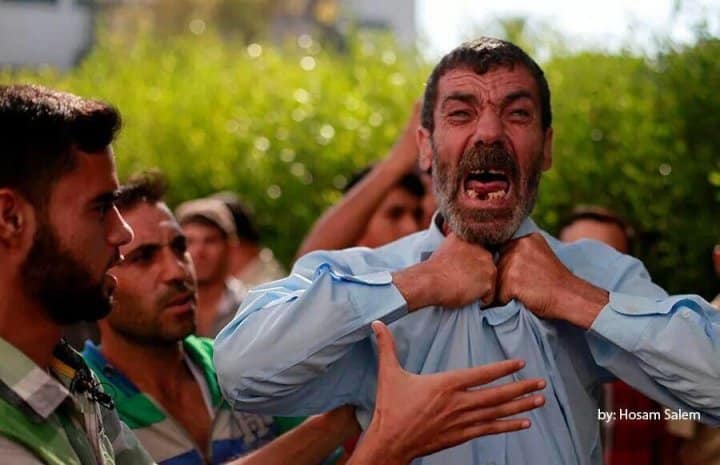 The dirt crunched hard as the blade of the shovel pushed deeper, a boot kicked the metal head further into the Earth. Lifting the weight of rock and clumped dirt from the ground, he threw it to the side and repeated the action. The pain of the labor did not deter him, his hands blistered, the ground did not soften the further he went. Almost on instinct he dug until he had the right dimensions. He knew them intimately.

Climbing from the hole that he had made, he turned to the pile of dirt nearby, his eyes dared not look beyond. Briefly he looked up to the sun, it was lowering on the horizon, though it was warm the day felt grey. Resting the shovel against the pile of unearthed dirt he carefully approached another pile.

With consideration and care he lifted a slight body, it was limp and still in a Summer dress. Slowly he lowered the body into the ground, placing it gently into its final resting place. A young girl, her eyes shut he body lifeless and broken. Blood and mud clumped at her scalp, her once long hair was tangled and twisted. Her innocent sweet face, dirty and lost. She would never hug him again, never run to him, she would never laugh at his jokes or hear his stories.

He could not speak her name as he looked at her. Slowly the shovel collected a slice of dirt. He dropped it onto her feet, he dreaded the moment where he would need to cover her face. Again, he lifted the loose Earth so that it may cover another piece of her. Carefully he placed the dirt across her body, like a soil that would somehow nurture her final place of rest. Finally he lowered the dirt across her face, his final good bye as she disappeared.

He fell to his knees; he could not collapse in sorrow his day was not over. Instead he patted the ground over. Placing a flower where her head would be all those feet underneath. No prayer, or words just his deliberate actions. It was all that he had left. The miserable aftermath. The anger, machinations for vengeance could come later now he simply had to put back to the ground what had mattered most to him.

He walked by the other hole, it had its own pile of dirt and body. This one heavier, older. Her beauty carried on even now, he felt his hands slip as he lifted her. She did not hold him back, her eyes opened as he raised her from the ground though she did not look at him. He bit his lip as he carried her to the hole in the ground, softly he lowered her. His trembling hand washed the debris from her face and pushed her hair across her shoulders. He felts his eyes dampen as he quivered in a dark sickness.

One last look at her precious being, the shovel crunched into the pile of dirt. He repeated the slow ritual of anguish. Burying her beneath the ground, under the dirt near their home. He watched her face disappear. He no longer had a pile so he dropped the shovel and pushed the ground firmly against her body beneath. No flower for her, instead he dug at the soft dirt with his fingers reaching down deep enough so that he could bury a small bracelet. The piece of metal was a symbolic gift from him to her, now a hidden head stone that only he would understand.

Standing over the two graves, everything that mattered to him lay beneath. He no longer needed the shovel. He soon would need another tool however. The sun now slowly hid beneath the horizon. It now felt cold. He could not go to his home for warmth and rest, it no longer stood. Smoldering beneath a blanket of lazy smoke. Outside of his own intimate pain it was just another day.

He walked away, truly alone. He could cry but it would do him no good. Restless and lost he had no one to embrace, no one to protect. Nothing. He had failed as a father, husband. He had lost. Someone somewhere far away would shrug, ‘that is war.” For him, it was the rest of his life.