Cops Charged After Video Shows Them Pull Disabled Man From His Home, Torture Him in Front Yard

Cops Charged After Video Shows Them Pull Disabled Man From His Home, Torture Him in Front Yard 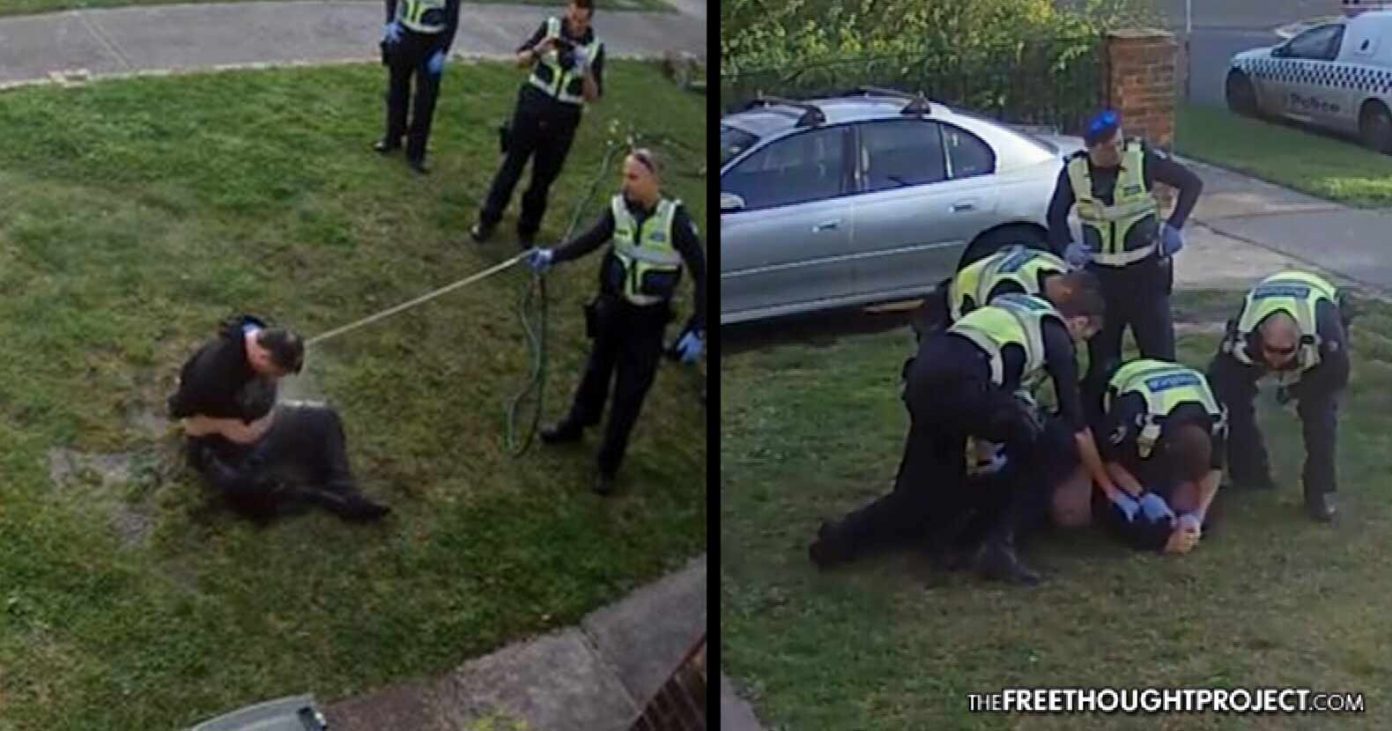 As TFTP previously reported, horrifying surveillance footage was released showing multiple police officers aggressively assaulting and torturing a disabled man in his front yard after they dragged him from his home during a welfare check. That footage has led to the arrest of three police officers, one of whom was arrested again for beating a teenager as well.

Because he was not immediately arrested after video of him beating the man in his front yard, Hilgar was allowed to strike again. Hilgar now also faces charges in a separate incident in which he beat and severely injured a teenager with his baton.

Hilgar appeared in court this week over the former incident and the other two officers have not yet been assigned a court date.

As TFTP reported, the incident happened in September 2017 and began over a welfare check.

John, a retiree from Melbourne, Australia, was supposed to be enjoying his golden years in peace—but after his psychologist called the police, all hell broke loose. Victoria Police arrived to presumably perform an unwanted welfare check. When John refused to speak with the officers, they dragged him into the yard, beat him, pepper-sprayed him, and then hosed him down with a high-pressure water hose—all while mocking him.

The entire incident was caught on video recording principally because the homeowner had installed a surveillance system after his house was previously burglarized. In the graphic video, Victoria Police can be heard taunting the elderly man, cursing at him, beating him in the legs with their batons and covering his face with pepper spray.

“You f**king idiot!…You like that?…Smells good, doesn’t it?” the officers mocked him.

The man, who suffers from a bad back and emotional distress can be heard screaming “My back!” as the pack of officers manhandle him.

As the video shows, Edney is seen hitting John with his baton and stepping on his head. McLeod punched John in the stomach, sprayed him with pepper spray and encouraged Hilgar to use the hose — which he did.

The officers’ true intentions were revealed when they were presumably attempting to wash off the pepper spray with which they had filled his face. When Hilger started applying the water, the nozzle’s setting was set to hose. Later, the setting was changed to spray, and a solid stream of water was applied to the man’s head and face, likely injuring John further.

When Hilgar noticed his fellow officer was recording with his cell phone, he stepped back, as if to imply by his actions that he did not want to be caught on camera abusing the man. But caught on camera he was—just not the one he believed his colleague was holding.

Upon the arrest, officers charged the man with assault but the recording tells a much different story. Not only did John not call authorities, he asked them several times to leave him in peace. When he refused to comply with their unlawful orders, the man was violently mistreated.

At the time, officials and politicians weighed in on the attack. Opposition Leader Matthew Guy told reporters, “All Victorians will be outraged by it,” and called the actions of the police officers “abhorrent.”

Acting Commissioner Luke Cornelius called the CCTV “concerning” and said, “sunlight is the best disinfectant,” welcoming external scrutiny of his department’s actions in John’s case. And, it appears that external scrutiny has yielded a small victory for police accountability, although we do not know if they will be convicted.

Victoria Police responded with their own statement provided to 9News, claiming their department, “has no tolerance for poor behavior within its ranks…Our officers make mistakes like anyone else, and when that happens, we learn from that.”

At the time, Premier Daniel Andrews admitted that he never watched the footage but he defended the Victoria Police Force. “Victoria Police, as the nation’s best police force, conduct themselves with professionalism and in my experience proportionate to the risk that they face,” he said.

This “professionalism” can be seen below: