Cops Charged With Burglary, Murder After Breaking Into Man’s Home, Shooting Him 76 Times

Cops Charged With Burglary, Murder After Breaking Into Man’s Home, Shooting Him 76 Times 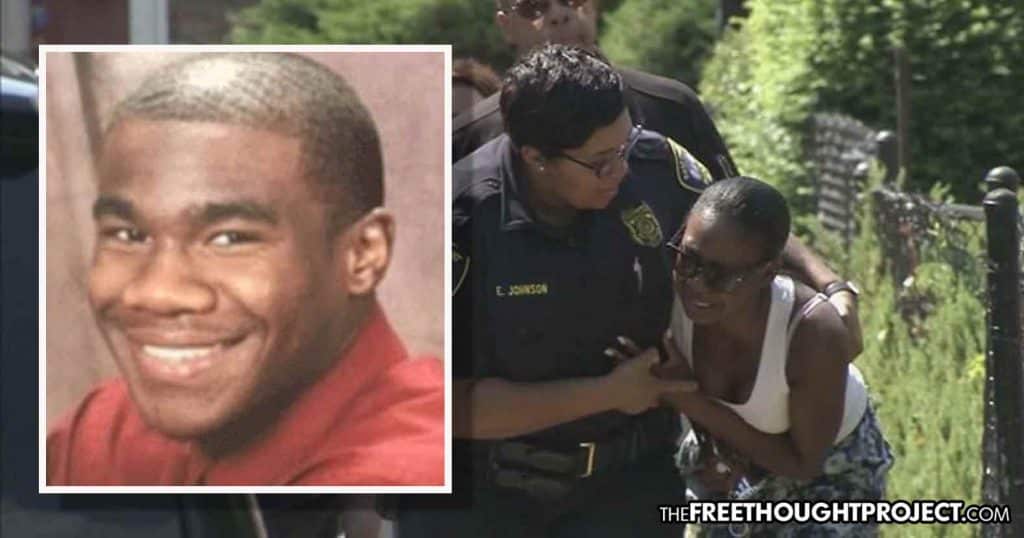 The family of a 26-year-old Atlanta man who was killed after police shot him 76 times, thought for years that their only course of action was a civil rights lawsuit against the officers involved. However, this month, five years after Jamarion Robinson was gunned down in his own home, the officers who killed him are being held to account.

Eric Heinze, an assistant chief inspector with the US Marshal’s Southeast Regional Fugitive Task Force, and Kristopher Hutchens, a Clayton County police officer working with the task force, have now been charged with felony murder.

In addition to the two counts of murder, both officers were charged with aggravated assault, burglary, making false statements and violation of oath by a public officer.

Though no body camera footage exists, the sheer number of bullet holes in Robinson’s body is enough to dispel any myth of appropriate and necessary force.

“Over 90 rounds were fired at my son, flash-bang grenades were thrown at him, landed on him, burning him. Somebody walked up the stairs, stood over him, and shot down into his body two more times. After that he was handcuffed and drug down a flight of stairs,” his mother, Monteria Robinson, said. “My son’s body is all the bodycam you need. I wake up every day with anxiety. I’ve been in fight mode ever since my son was killed. I want closure.”

Before police killed him, Robinson had never been arrested or convicted of a crime. He was merely in a mental health crisis and it ended in his brutal execution.

In August of 2016, police broke down the door of Jamarion Robinson’s girlfriend’s home in Parkside Camp Creek Luxury Apartments and began spraying the interior of the apartment with bullets. Robinson was killed by multiple police task force officers from several different departments, including the U.S. Marshal Service.

On that fateful day in August, police were serving a warrant for Robinson’s arrest. Police claimed that during a previous confrontation, Robinson had pointed a gun at officers. However, according to multiple accounts, at the time of the shooting, Robinson presented no threat to police. What’s more, he was only “believed” to have been the man who pointed a gun at officers before fleeing.

“At the time of the shooting, Jamarion Robinson presented no threat to the defendant officers or anyone else,” according to the lawsuit.

The lawsuit claims that Robinson had been diagnosed with schizophrenia and that the responding officers were never trained in dealing with the mentally ill.

A private detective hired by Robinson’s mother uncovered evidence of gunshots fired straight into the ground where her son’s body was lying—indicating that an officer or officers walked up to his body, stood over it, and fired at point blank range just to finish him off. Cellphone video from a nearby apartment recorded gunfire from police for nearly three minutes and backs up these claims.

As the AJC reported:

The complaint accuses officers of knocking at the apartment door, but then immediately breaking the door down and “spraying” the interior with 9 mm and .40 mm submachine guns and .40 mm Glock pistols.

It also accuses the U.S. Marshals involved with the task force of tampering with evidence by handcuffing Robinson at the apartment, after he was dead from his gunshot wounds, and throwing a flash grenade into the apartment.

The lawsuit was filed against eight named law enforcement officers from a number of different law enforcement agencies, as well as 11 unidentified officers. It alleges that the officers used excessive force, manipulated evidence falsified reports.

According to the lawsuit, somewhere between 59 and 76 bullets or more were found to enter the body of Robinson, killing him. The officers involved were named in the suit and are from the Atlanta Police, East Point Police, Fulton County Police, Clayton County Fire and Police departments, the Fayette County Sheriff’s Office and the U.S. Marshals Service.

“I want to know why 76 bullets entered my son’s body,” said Monteria Robinson at the time of the lawsuit.

The lawsuit claims the officers “conspired among and between themselves to unreasonably stop, seize, shoot and injure Jamarion Robinson in violation of his Constitutional rights, to destroy and fabricate evidence, to complete false, inaccurate and misleading reports, and to make false statements to superior officers in order to conceal their wrongdoing.”

Now, the charges appear to reflect everything they said in the lawsuit.