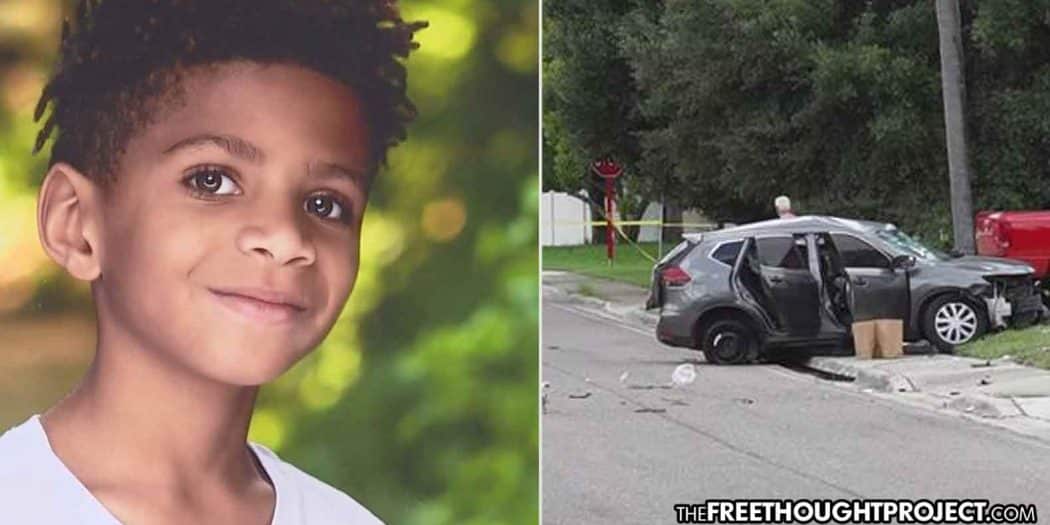 As the Free Thought Project reports on a regular basis, police in the land of the free will go to violent and often deadly extremes to enforce even the most arbitrary “law.” If police claim to see you break one of these arbitrary laws like speeding, they claim the right to detain and extort you. If you choose to resist this extortion, police will then claim the right to kidnap you. And, as the following tragic case out of Georgia illustrates, if you resist this kidnapping, police will use deadly force like a pit maneuver, including against children.

Last week, Charlie Moore was driving his teen son, 14, and his friend 12-year-old Leden Boykins home from a job at which they cleaned up parking lots for extra cash. On the way home, police targeted Moore for revenue collection, claiming that he was driving too fast.

According to a Georgia State Patrol incident report, Moore was pulled over off of Highway 92 in Paulding County for “driving recklessly and at a high rate of speed,” and when ordered out of the car for a speeding ticket, he refused, saying he was scared since so many officers were present.

While pulled over, Moore called 911 to report the fact that multiple troopers were threatening him and that he was in fear for his life. And, as history shows us, he had every reason to be fearful.

“He told the 911 operator, he said, ‘I need for y’all to get a supervisor out here, there’s too many police cars and I’m in fear of my life,’” Leden’s mother, Toni Boykins said.

When a trooper on the scene began attempting to smash in Moore’s window, he fled the scene to preserve his life. During the chase, he stayed on the phone with 911, clearly indicating to them that he was not a threat and just wanted to be in a safer situation.

Everyone involved, from the 911 operator to the troopers involved in the stop knew there were children in the car. They also knew who the car was registered to, knew the driver’s name and address, and easily could have gone to his home after this to enforce the penalties for fleeing a stop for speeding.

But that did not happen.

Instead of applying logic and reason and allowing Moore to simply drive home, drop off the children, and then safely arrest him later at his home, one state trooper decided to conduct a PIT Maneuver—on a car he knew was full of children—to flip Moore’s car over. For a speeding ticket.

On the 911 call, we can hear the trooper trying to flip the vehicle, despite Moore pleading with 911 that he has kids in the car.

According to the 911 call, Moore remained connected to dispatch during the attack by the trooper and the car is heard rolling over before Moore shouts, “Leden! Leden! Leden! No!…” He knew Leden had been killed.

The official policy of PIT maneuvers is fairly specific on avoiding incidents involving children in the vehicle. Nevertheless, troopers decided the enforcement of a speeding ticket was more important than the lives of two children, and it was carried out.

Now, Moore has been charged with Leden’s murder, and while he certainly deserves to be held accountable for his role in the child’s demise, he was most assuredly not the one who killed him. Leden’s family agrees.

The trooper who caused the crash is under investigation, however, this is merely standard procedure and likely won’t amount to any accountability. For now, Leden’s parents are fighting to get back their son from the city, who has had his body since the crash.