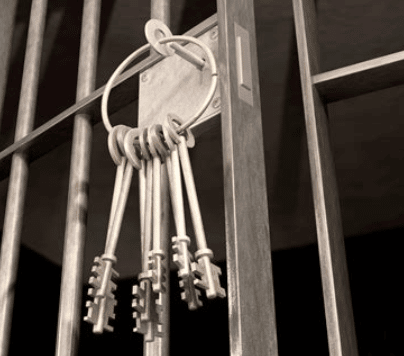 The guard closed the door. There was an inch of raw sewage water on the floor, and about twenty men were detained in the holding cell. David Mayer and I had been arrested on charges of felony gambling promotion of a lottery. It was February 1991.

Unhappily the standard of proof is no longer what it used to be. Although the state of Texas and Harris County would later sign an agreed injunction dropping the charges, our business would be destroyed by the publicity associated with the arrest. In that injunction, the state and county governments would stipulate that we had been conducting a lawful sweepstakes. By the time they made that admission, though, it was far too late to rebuild.

About two hours into our ordeal at the “old” Harris county jail, we were fed. There was a two-inch gap under the door, and about two feet between the door and the flood waters from the overflowing toilets. Sandwiches in brown paper sacks were slid under the door and most of them ended up in the sewage. Several of the prisoners grabbed up sandwiches as fast as they could and passed them along. Later I counted two dozen sandwich bags soaking in sewage.

Then the door was cranked open and a guard stood in it while an orderly came in with a jug of water. The five-gallon jug was no doubt refilled with tap water down the hall somewhere. No cups were provided. One intrepid soul ventured to lift the jug above his head and let some of the water flow into his mouth. I decided to eat later.

Having not much to do, David and I looked at the flyers pasted on every wall of the holding cell. They were from a federal court proceeding and declared that simply being in the jailhouse constituted cruel and unusual punishment.

As the afternoon progressed, we were moved to another holding cell, one without toilets. So, though the smell of sewage was pervasive, we no longer had to stand in it. We did have to stand though, as more than 80 prisoners were brought into the cell which could only have been meant to hold 30 or 40 men.

Shortly after 5 pm our attention was directed to the news which was being shown on the one television in the place. David and I were featured in a story about our arrest that morning at our offices, after which we were driven to the jailhouse. Although the jail has a drive-in entrance, we were kept waiting in the back of a patrol car until the media arrived about 45 minutes later, so we could be “perp walked” to the jail. Thus we became instant celebrities in the jail, and a younger man offered to steal the district attorney’s car and set it ablaze on our behalf. His enthusiasm for our cause was impressive.

There was some improvement to the Harris County jail by January 2004. At the time, I had more difficulty concentrating because the police had broken my nose and ten of my ribs during the arrest. By the time they got me to the jailhouse, I was vomiting from the pain and began choking. They were kind enough to bring an ambulance which arrived shortly after I stopped breathing, and the EMT got my breathing started and took me to hospital. The police insisted that I was to get no pain meds, and so

I spent three days on the stone benches of various holding cells, upstairs and down, conversing with prisoners who were impressed with the amount of damage to my face.

Upon leaving the jail I was given a ticket that said “Houston Superbowl Dragnet.” It had been Superbowl weekend in Houston. Back in the 1990s, I was part of the Houston Property Rights Association, which organised several protests in opposition to taxpayer financed stadiums. Having me “off the streets” was important to certain people.

Having been arrested a number of times, and in a number of jurisdictions, I’ve come to notice several ways the government makes extra money. For example, in 2015, Evergreen Communications reported about $1.5 billion profit from selling those collect calls that prisoners have to make to reach anyone outside the jail. Believe me, if you’re in jail three days you do want to get updates from your friends and family about getting released on bond or whatever.

Bail bondsmen charge a fee for what amounts to a short term loan. Whatever they post as your bail gets back to them assuming you appear in court. If you don’t appear in court, they charge you to find you and haul you in, plus your bond is forfeit. Yes, the government gets the use of those funds, and so there is profit for many people involved in the system.

Should you be convicted of a crime, the profits go way up. Now you can be charged a fee for every day you are in jail, and after you are released on parole or probation, you get to pay for those costs for months or years. You can, in prison, buy underwear (none is provided in some prisons) or slippers, or food items, or even a transistor radio, if, and only if, you pay into the “commissary.” The items are priced to show an enormous profit.

Yes, I believe it is the case that prosecutors, district attorneys, and others in the system are compensated for convictions, not for finding the truth. Indeed, to get a higher percentage of convictions, some prosecutors have been found hiding aspects of the truth, including exculpatory evidence. Even in capital murder cases, over the years it has been shown that many who have been on death row were in fact innocent of the crimes for which they had been convicted.

Much reform is needed if there is to be justice. Prisoners awaiting trial should not be treated harshly. Non-violent activities such as buying and selling plants or chemicals should not be criminal. Prisoners convicted of violent crimes or property theft should be treated fairly and they and their families should not be forced into decades of debt peonage.

Until there is justice in our system, it is unlikely that there is going to be peace on our streets. People are righteously angry about their neighbours being killed by police in their communities. The vast majority of gun violence in America is from the police. You are many times more likely to be killed by the police than by a “terrorist” including mass shooters.

There can be no peace without justice, no justice without freedom, and no freedom without an armed populace.

Jim Davidson is an entrepreneur, author, actor, and liberty activist.