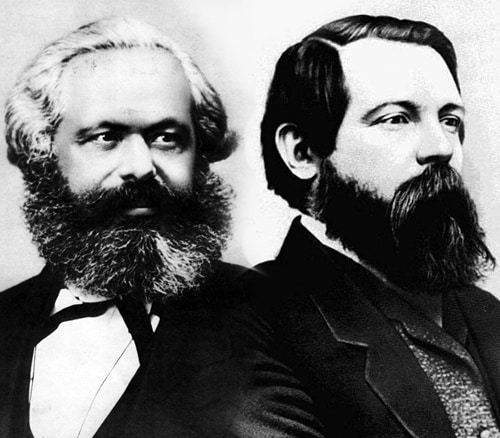 Does a competitive, free market capitalist system drive down wages for the common man?

That’s the question I was confronted with in a recent exchange I had with a Marxist on Twitter.

“Instead,” the post continued, “markets drive up wages because entrepreneurs must bid against one another to acquire and retain the workers they need.” This led me to my ultimate point that “government intervention that limits competition will repress wages.”

The take home point, of course, was to illustrate that when the state interferes with the market it harms the working class; in contrast to the excuses of statist interventionists who insist their interventions are designed to help the common man.

That conclusion was unacceptable for our friendly social media Marxist, however. He replied with the following comment:

How do markets drive up wages when there are more qualified people available than total jobs? Wouldn’t that drive down wages given someone who is starving without a job is always willing to work for a little less?

This is a common objection raised by Marxists, and a pillar of Marx’s economic analysis. Marx claimed that competitive, capitalist market economies would drive down wages of workers for the reasons stated above. Namely, that the labor force outnumbers the amount of available jobs, putting workers at a grave disadvantage and forcing them to accept ever dwindling wages if they are to be hired. Employers have no reason to pay anything more than “starvation wages” because the supply of willing and desperate workers far outstrips the supply of jobs.

Employers can drop wages as far as they want and still find willing takers, according to the theory, because if one person refused to work for such little pay, there will be a significant pool of desperately unemployed people willing to accept the crumbs. This tendency for competitive capitalist markets to drive wages down to bare subsistence levels is often referred to as the “Iron Law of Wages.”

This is an argument still relevant to policy discussions today, so it’s important to address why this argument is wrong.

For clarity, it is important to first gain an understanding of what determines wages. A highly useful insight can be gained from political scientist David Osterfeld’s essay in the 1993 book  Requiem for Marx, edited by Yuri Maltsev:

The marginal productivity of labor, in short, is the value added to the production process of the next additional worker added to that process. And, as Osterfeld notes, the value added of that next worker will be determined largely by the amount and type of capital goods, i.e. machines, tools, technology, provided by the entrepreneur to aid the worker.

Importantly, the marginal productivity of labor in one line of industry heavily influences wage rates in other industries. In an unhampered, competitive market labor will flow to the highest wages made available for which they are qualified.

This means, as Ludwig von Mises pointed out in his 1956 book The Anti-Capitalist Mentality, that improvements in the marginal productivity of labor in some lines of industry that drive up wages will spur wage increases in seemingly unrelated industries.

Mises noted that there are many jobs in which the productivity of the worker has remained unchanged for centuries. For the barber, the butler, and basic agriculture work, for instance, worker output has remained roughly the same for generations, but wages have nevertheless risen.

Mises observed, “the wage rates earned by such workers are today much higher than they were in the past. They are higher because they are determined by the marginal productivity of labor. The employer of a butler withoholds this man from employment in a factory and must therefore pay the equivalent of the increase in output which the additional employment of one man in a factory would bring about.”

In short, because marginal productivity in other lines of work have increased and driven up those wages, employers must increase their pay in order to keep worker from seeking the alternative lines of work that pay more.  As the opportunity costs to workers rise, i.e. the wages they are passing up to stay employed in their current job, so too will their actual wages.

As a result, the competitive market has a tendency toward driving up wages, even for lower-skilled sectors of the labor market.

A fallacy many fall prey to when believing that the wages of the average worker will be driven down to subsistence levels is the “lump of labor fallacy.” This fallacy is based on the faulty premise that the number of jobs in the economy is fixed.

Indeed, viewing the labor market through the lens of supply and demand but limited by the lump of labor fallacy may lend credence to the “iron law of wages” theory on its surface. Outside of those with skills highly demanded by the marketplace, their argument goes, the majority of average Joes and Janes would be forced to accept low and dwindling wages because jobs are more scarce than workers.

Of course, in a competitive market entrepreneurs are constantly looking to either expand or start new ventures, creating new job opportunities. Employers must compete with each other for the needed labor for their endeavors.

As Osterfeld observed, “Wages rise because, in order to take advantage of new profit opportunities provided by additional capital, entrepreneurs must bid workers away from their current positions.”

What those limited by the lump of labor fallacy further overlook is that demand for labor is heightened not only by business expansion and new market entrants, but also by the threat of new entrants in the market who may come along and bid away workers.

It would of course be naïve to claim that employers increase wages out of the goodness of their hearts. As Mises observed in his book Human Action, “Each entrepreneur is eager to buy all the kinds of specific labor he needs for the realization of his plans at the cheapest price.”

These wages, however, “must be high enough to take the workers away from competing entrepreneurs,” he added. In other words, the competition of an unhampered market more than offsets the employers’ desires to drive wages lower.

As evidence, consider that even with an extremely hampered economy in the U.S., wages for the average worker have steadily risen.

According to this recent Bureau of Labor Statistics report, employer costs per hour (wages plus benefits) for average compensation for all private industry workers increased from 2004 to 2020, a time plagued with one of our nation’s harshest recession, from $23.29/hr to $35.34/hr (see pg. 191 of report, figures taken from March of each year). The rise marked an increase of 51.7%, well ahead of the inflation rate of 37.2% during that time.

Clearly, the ‘iron law of wages’ is being broken.

If my Marxist critic were correct, and the average worker has such little bargaining power, then wouldn’t a significant share of workers be working for the minimum wage?

As Marx wrote in the Communist Manifesto, “The average price of wage labor is the minimum wage, i.e. that quantum of means subsistence which is absolutely required to keep the laborer in bare existence as laborer.”

Today, instead of a measure of “subsistence” to which average wages would fall, there is a government-mandated legal minimum wage.

Aside from those with highly valued skills who will see their wages bid up, the majority of workers will have to compete for the remaining jobs. Thus, according the Marxian theory, there’d be no reason for employers to pay any more than the legally-mandated minimum for a vast number of jobs, because the number of those competing for such jobs would far outstrip the jobs available.

Of course, reality once again serves to dispel this faulty notion. This 2019 Bureau of Labor Statistics report shows that just 2.1 percent of hourly workers above age 16 earn “wages at or below the federal minimum.” Of those, 47 percent were ages 16 to 24. So indeed it’s only a very small fraction of workers compelled to work for the minimum wage, and of those nearly half are young people probably in their first job.

One of the key criticisms of free market capitalism is that workers have little to no bargaining power, because the supply of labor exceeds the demand. As such, employers can leverage this advantage to steadily grind wages down to a bare subsistence minimum.

This theory, however, suffers from some major shortcomings. First is the fact that workers have opportunity costs, and employers need to pay wages sufficient to keep them from seeking work in alternative fields. So the increase in marginal productivity even in only select industries can still provide overall upward pressure on wages.

Secondly, the argument suffers from the lump of labor fallacy, which falsely assumes the number of jobs in the economy is fixed. Expansion of current businesses and new business startups is a regular feature of a market economy, however, which grows the number of jobs available.

Contrary to Marx and modern-day Leftists, it is not competition of the market that drives down wages, but restrictions on competition. For instance, barriers to entry for new entrants and other market interference that protects incumbent firms from competition would make it easier for them to pay lower wages.

An unhampered, competitive market economy is the working man’s best friend; and government interference their enemy.